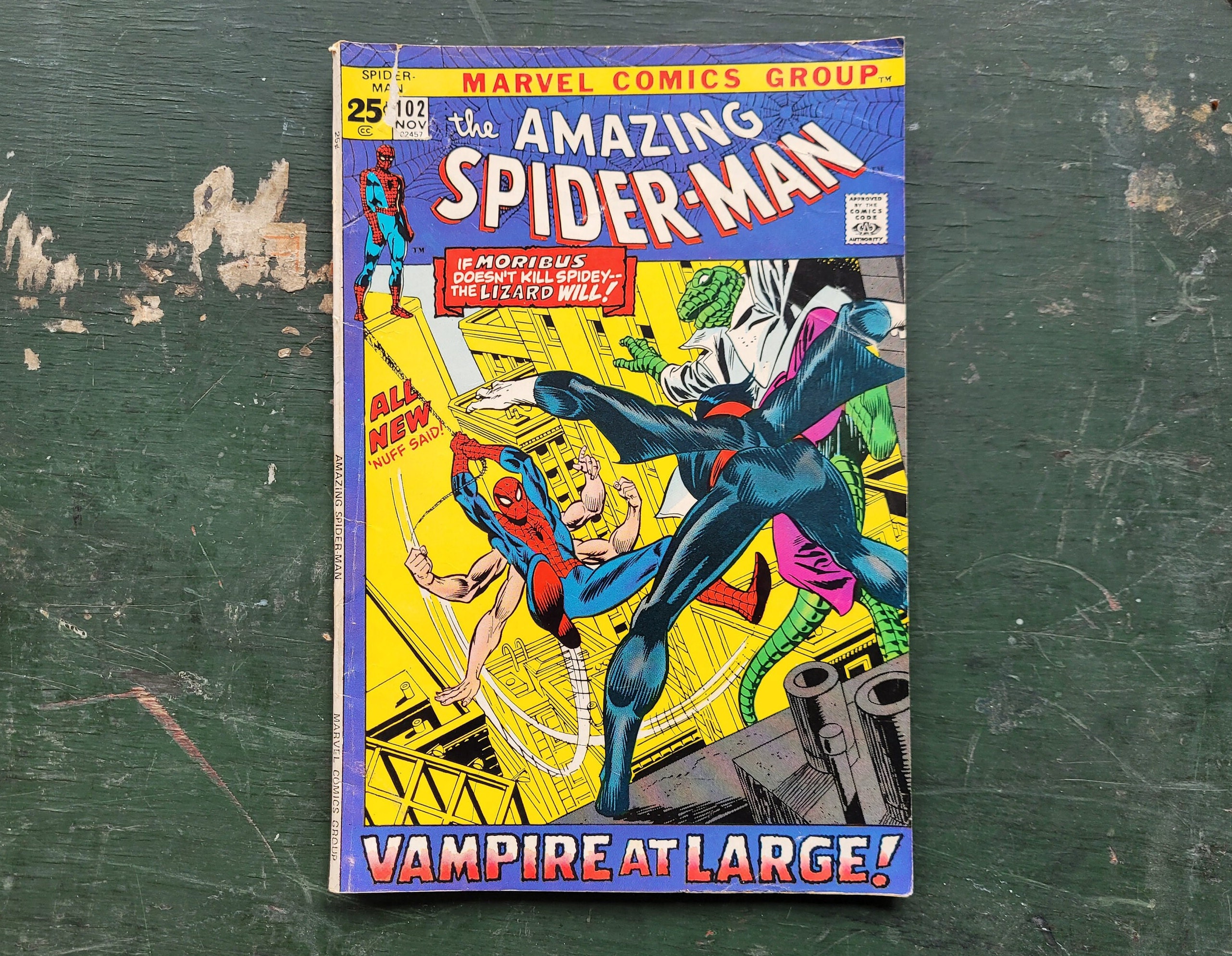 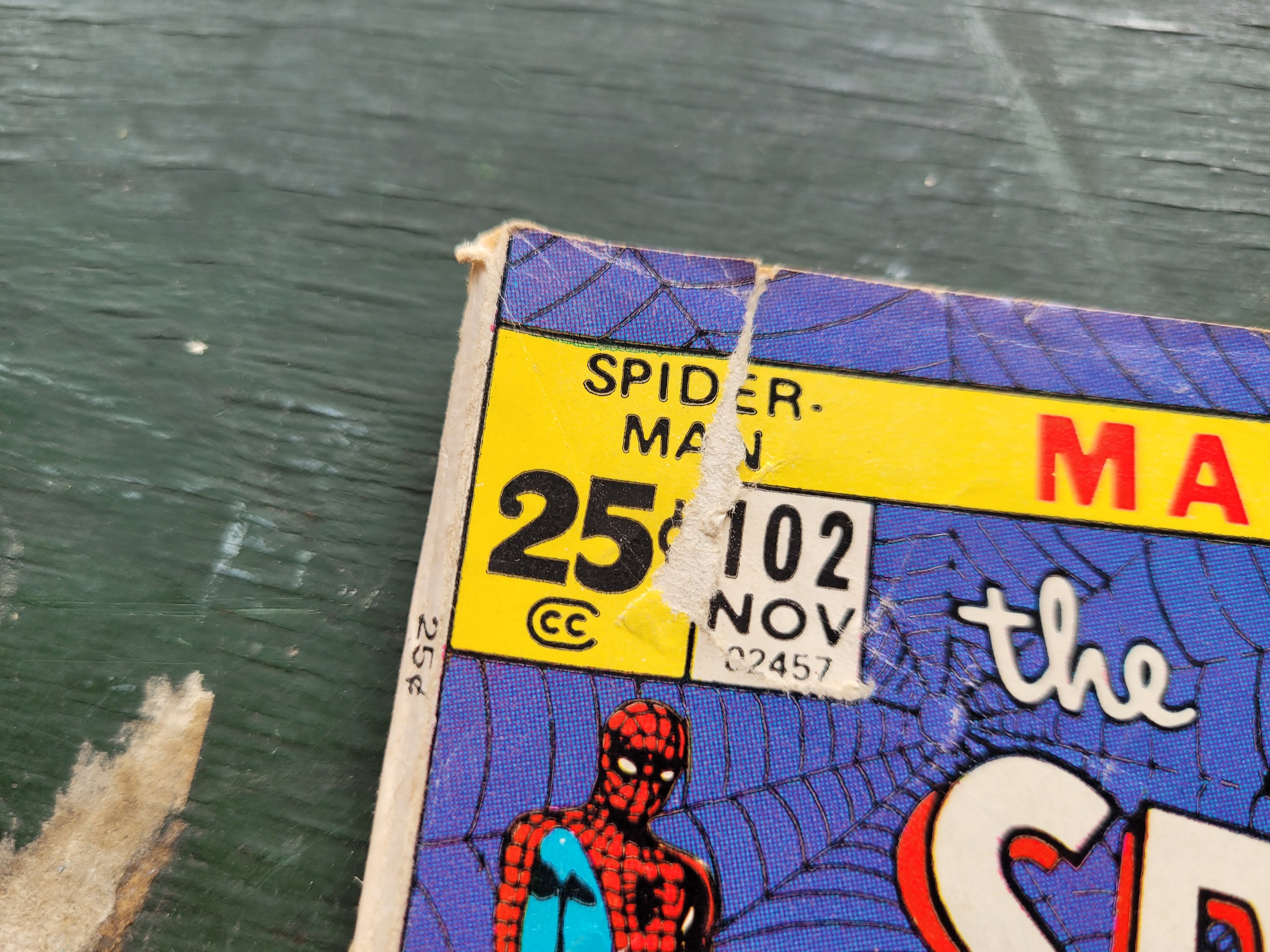 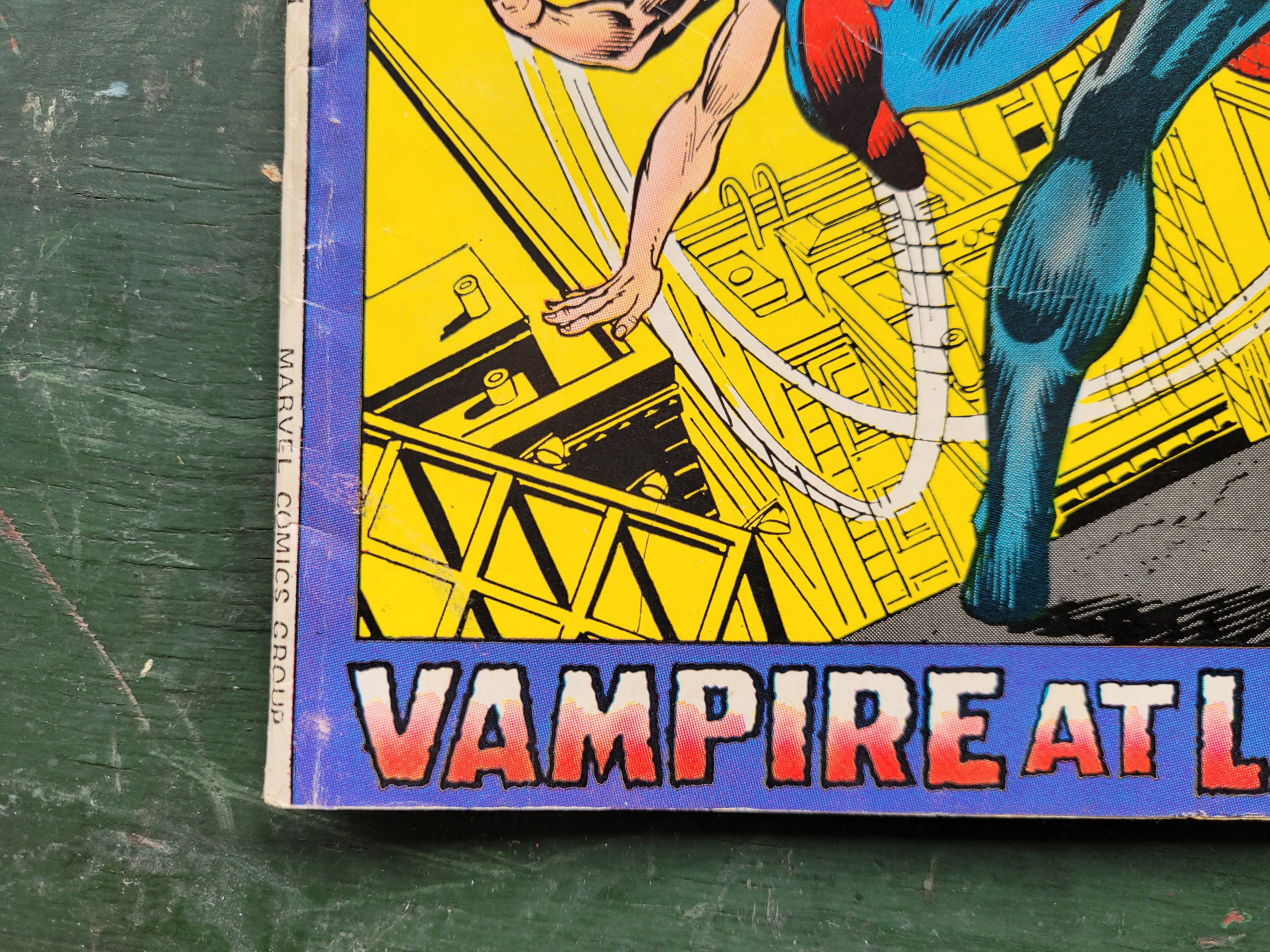 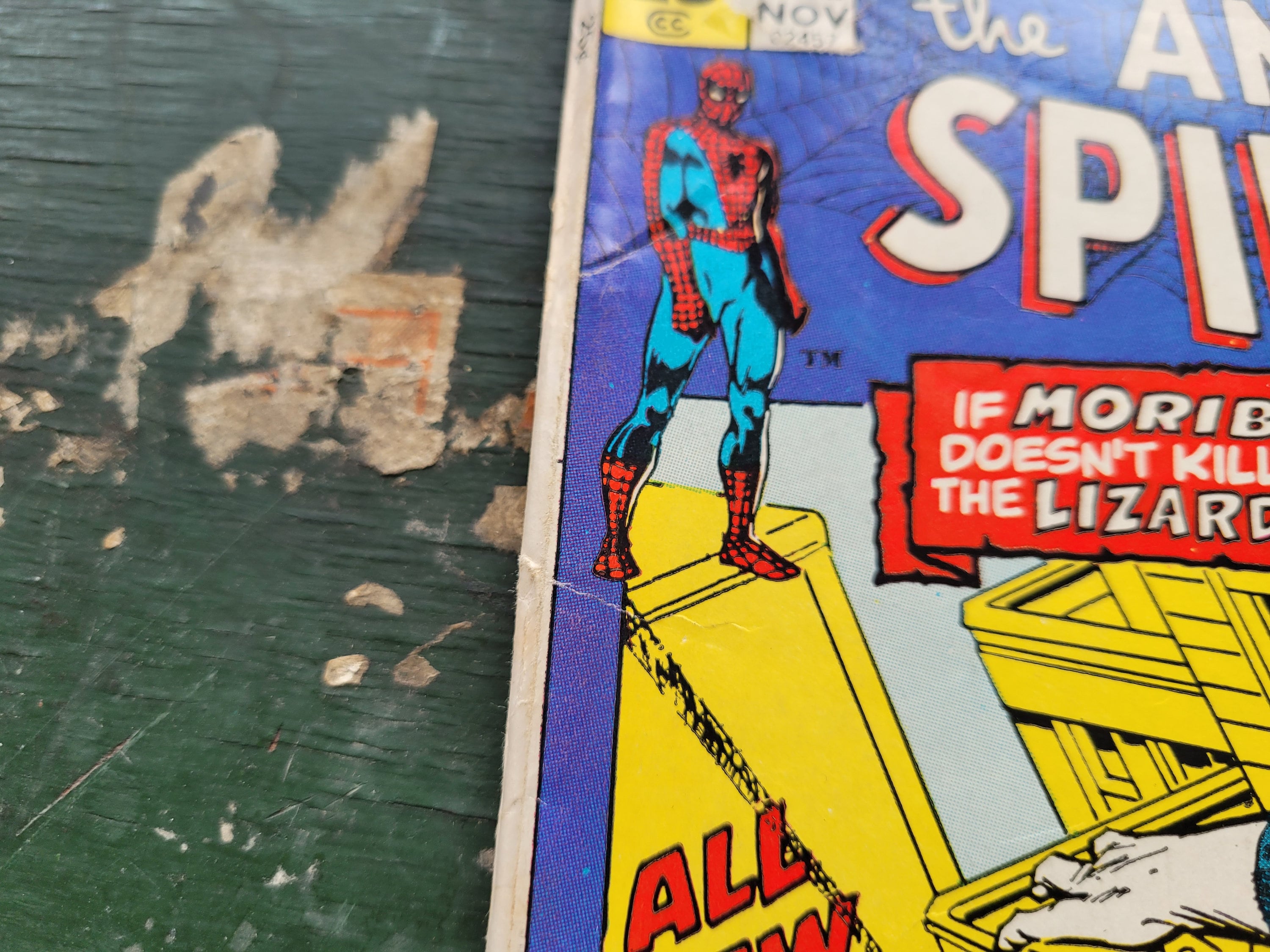 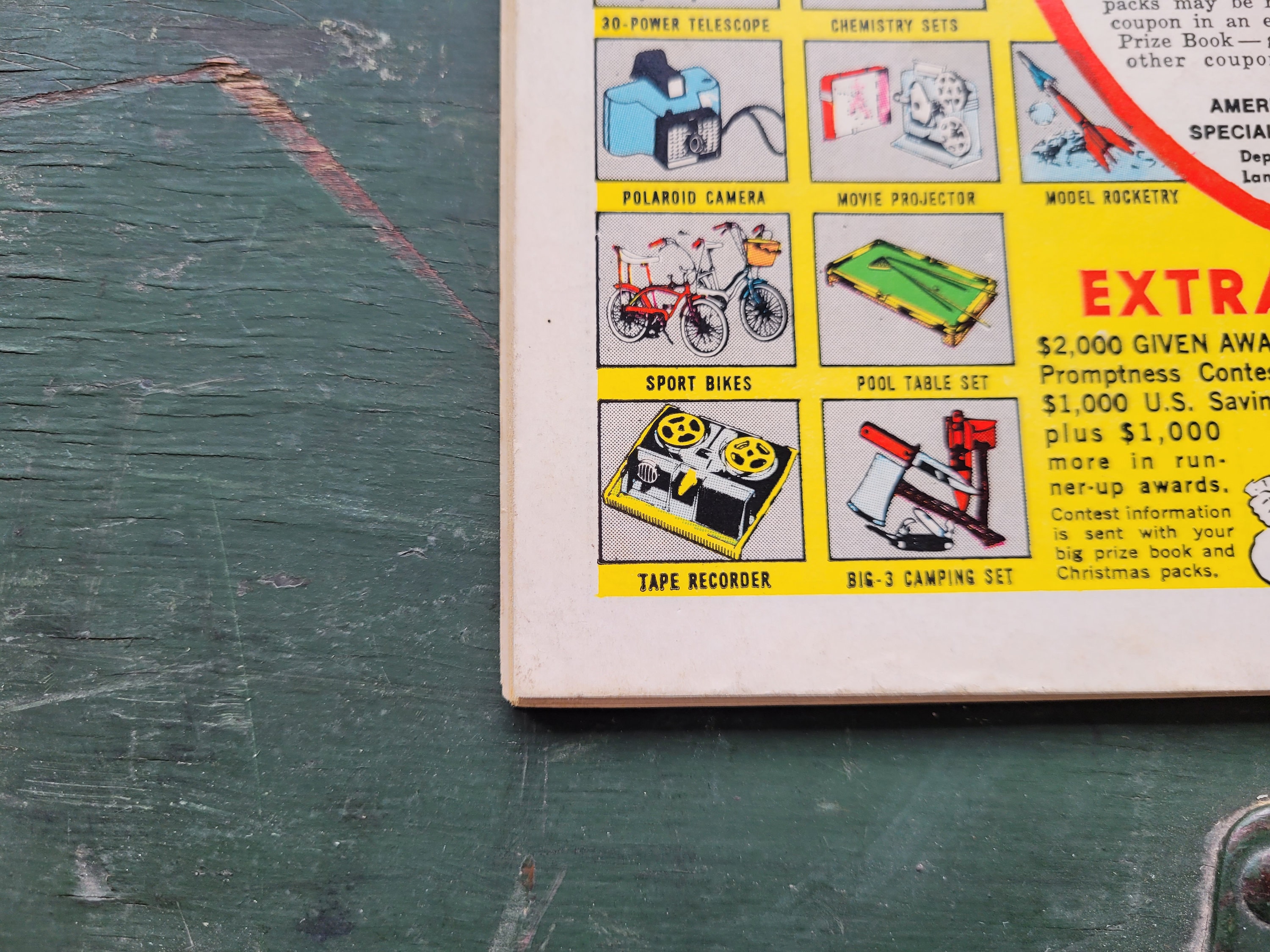 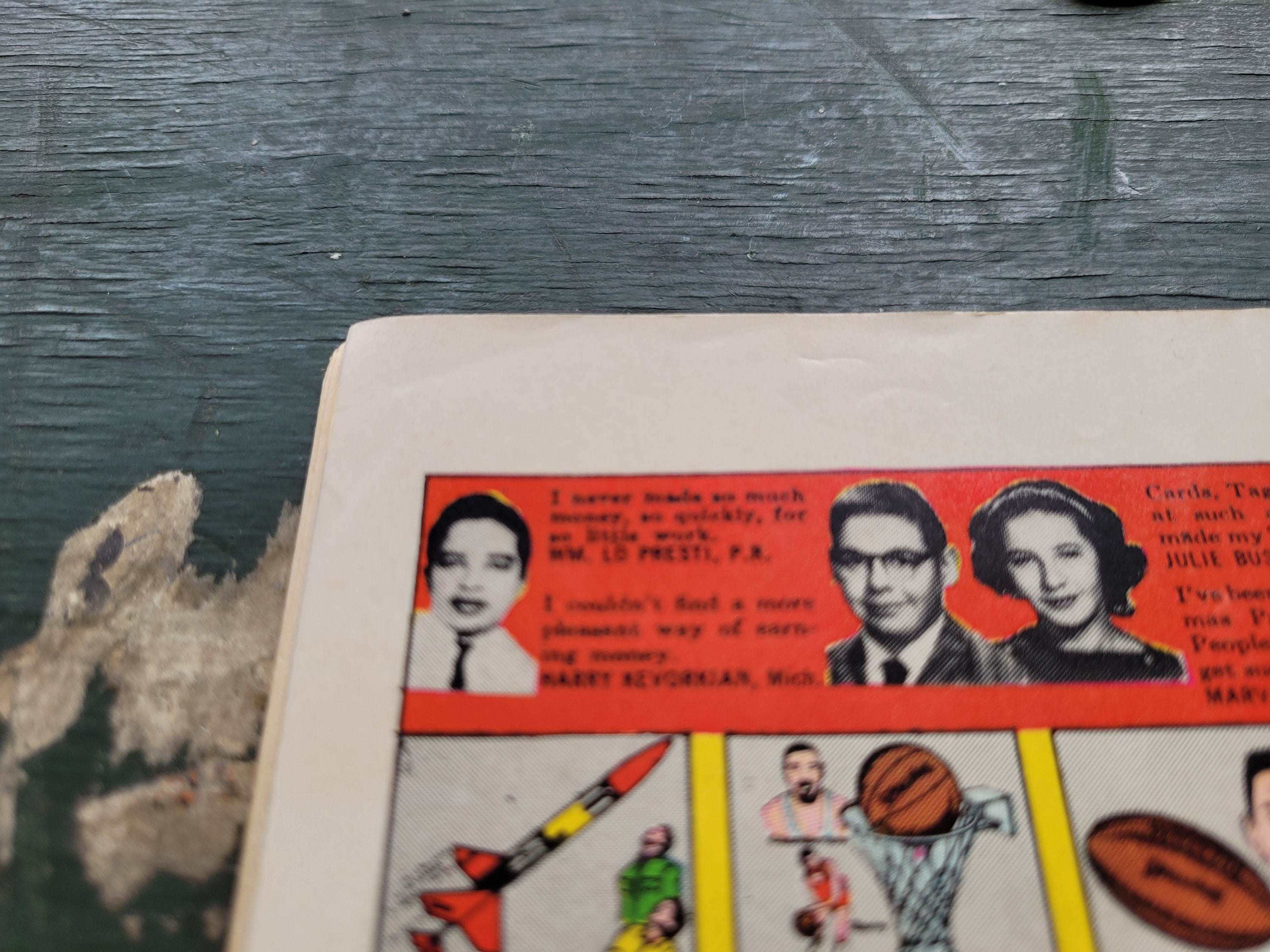 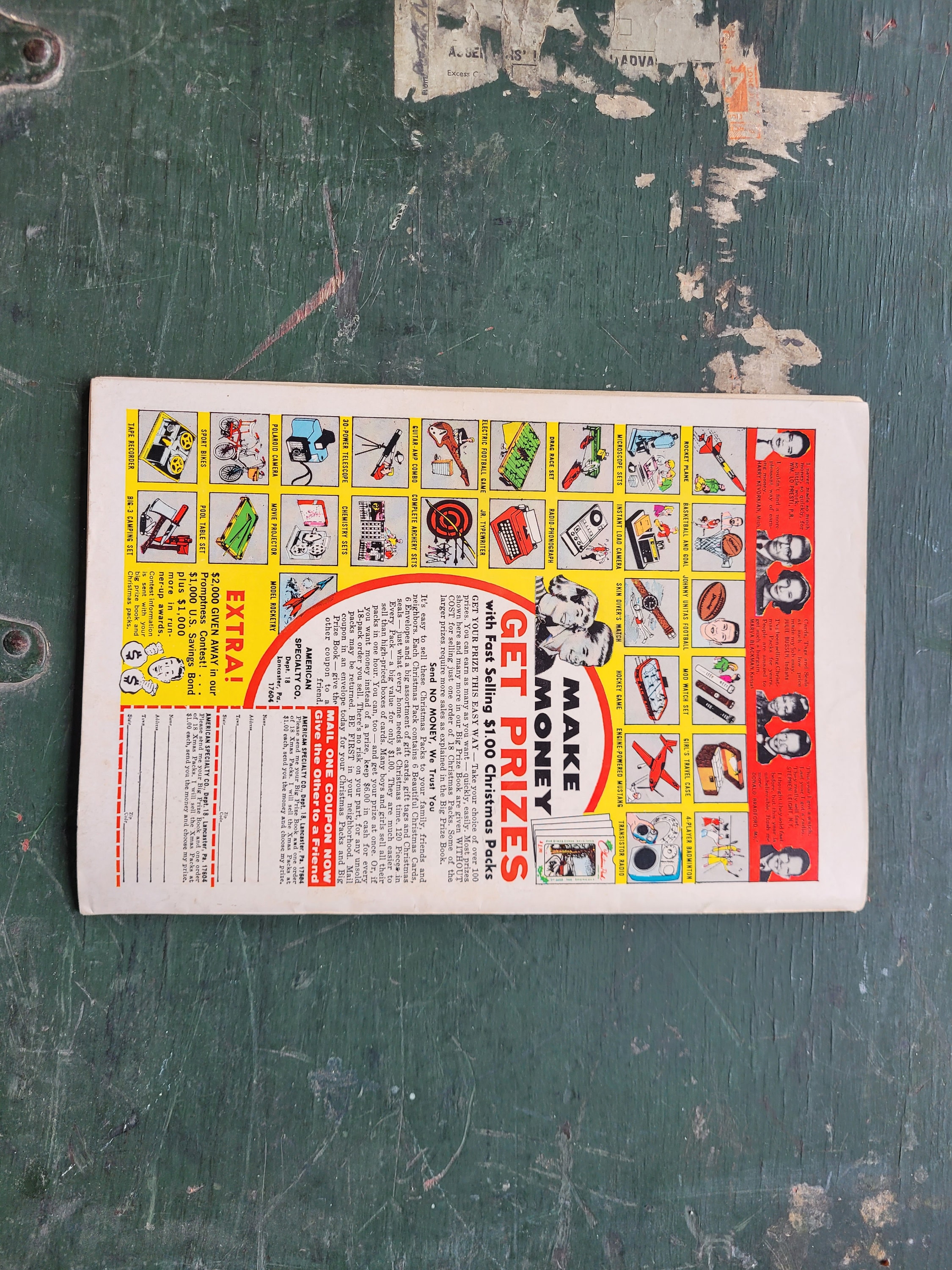 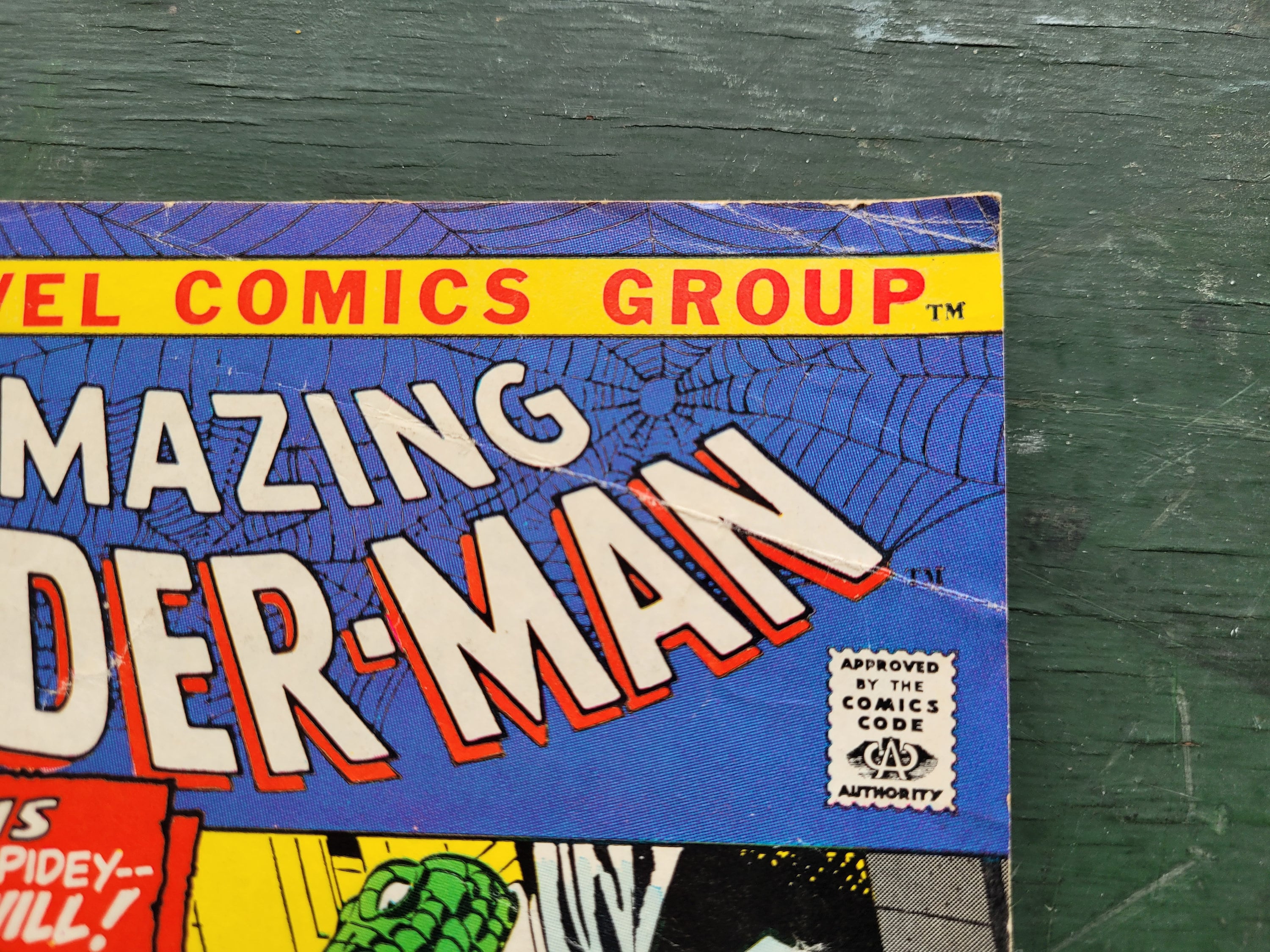 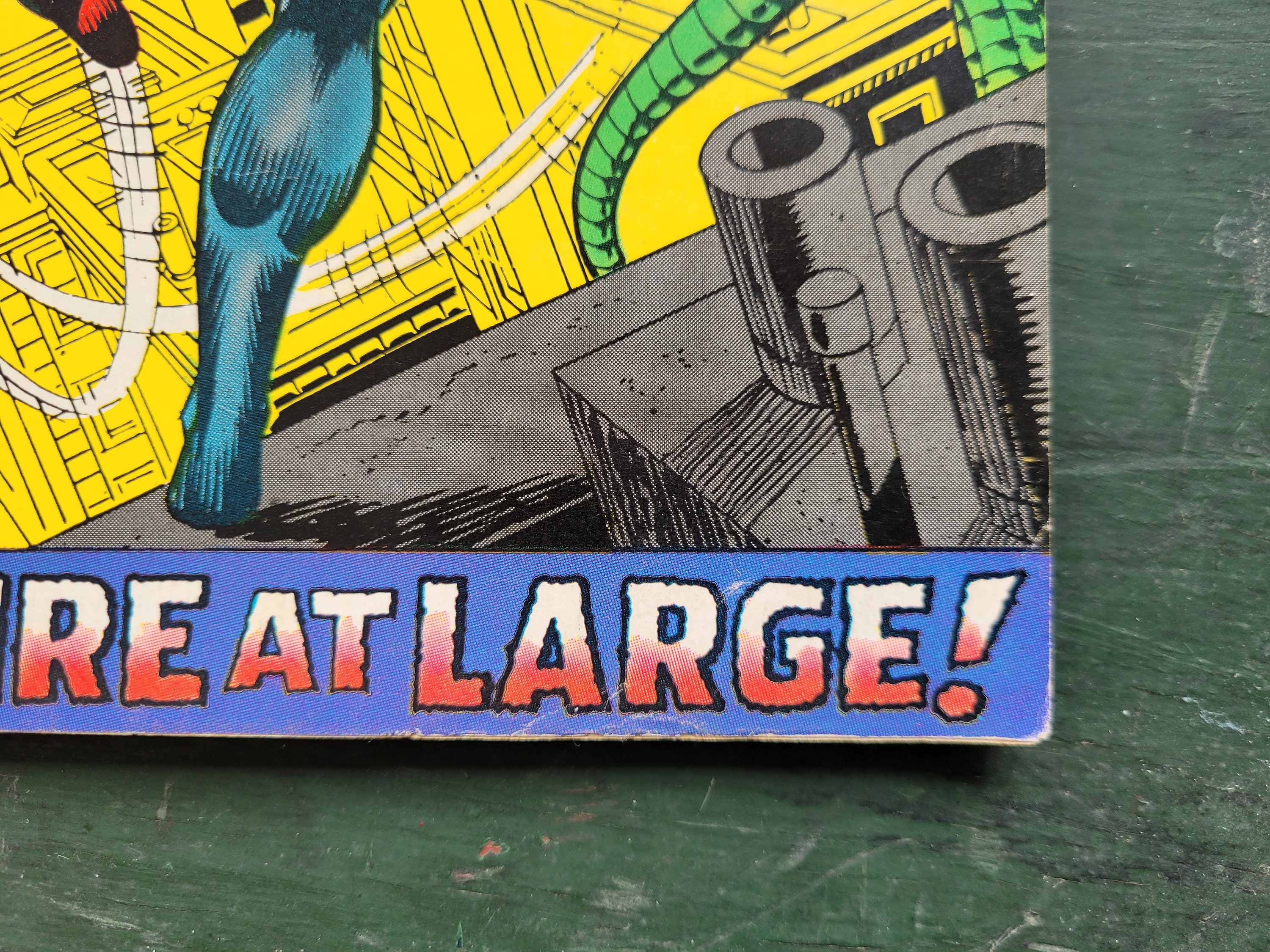 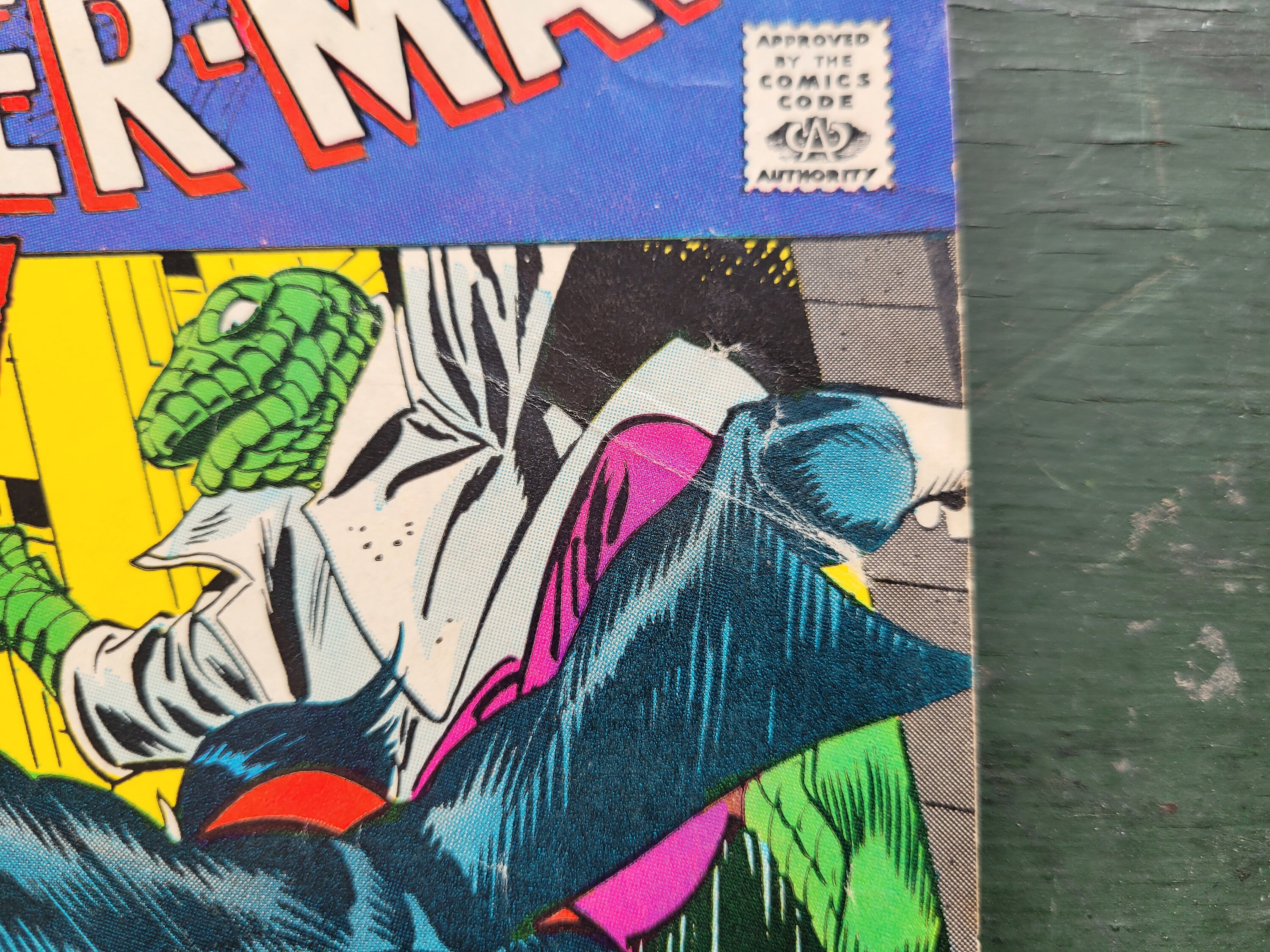 Here is a copy of The Amazing Spiderman #102 from November 1971
It is in used condition.
It has a significant tear on the cover, some small creases and the spine has some curl.
See pictures for condition.

"MORBIUS" ORIGIN
With the movie coming out this will immediately have an increase in desire.


A six-armed Spider-Man is caught between the Lizard and Morbius, the living vampire. Both foes end up fighting for their right to destroy the wall-crawler. However, during the fight the Lizard is knocked into an electrical panel, and Morbius manages to bite him, but Spider-Man fights him off before he can get away. To Spidey's surprise, something in Morbius's bite has caused the Lizard to partially revert back to Curt Connors. The effect is temporary, however Connors maintains his mind but struggles to keep the Lizard from taking control. The two decide to work together to try to find a cure for themselves, and deduce that something in Morbius's blood could possibly cure them.

Meanwhile, Morbius has retired, and as he sleeps he reflects on the events that caused this transformation: How he and his lover Martine Bancroft and an assistant were out on a yacht conducting an experiment to cure Moribus of a degenerative blood disease. The experiment backfired, turning Morbius into a living vampire. After killing his assistant, Morbius dives into the water not wishing to hurt Martine.

Awakening again, Morbius goes back out on the prowl seeking out fresh victims to feed on. As Spider-Man and Connors swing through the city looking for Moribus, Gwen Stacy sits at home worrying about what happened to Peter. When she calls Aunt May, she becomes even more worried when Aunt May tells her she hasn't heard from Peter either. At the Daily Bugle, J. Jonah Jameson confides in Joe Robertson about the Bugle's financial problems.

While elsewhere in the city, Spider-Man and Connors find Morbius, and they battle him. During the fight, Connors manages to extract some of Morbius's blood and injects himself with it. Surprisingly, it causes him to change back to his human form. But before Spider-Man can take the rest of the sample, Morbius grabs it and flies off. Spider-Man hitches on for a ride with a web-line, shadowing Morbius all over the city. Morbius eventually flies smack into an overpass causing him to fall in the river below. Spider-Man manages to recover the blood sample before Morbius sinks to the bottom. Injecting himself with the cure as well causes Spider-Man's additional arms to disappear.