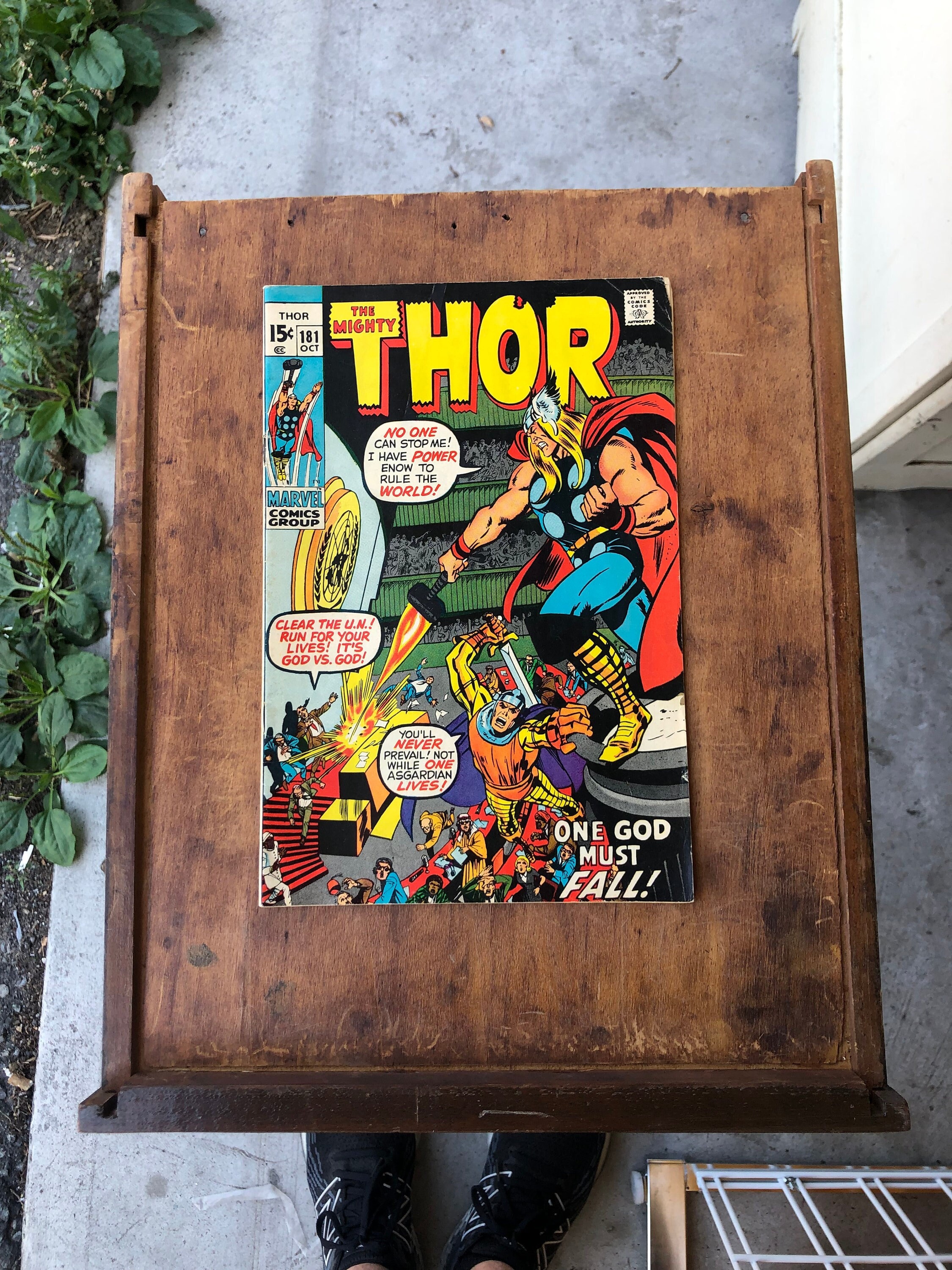 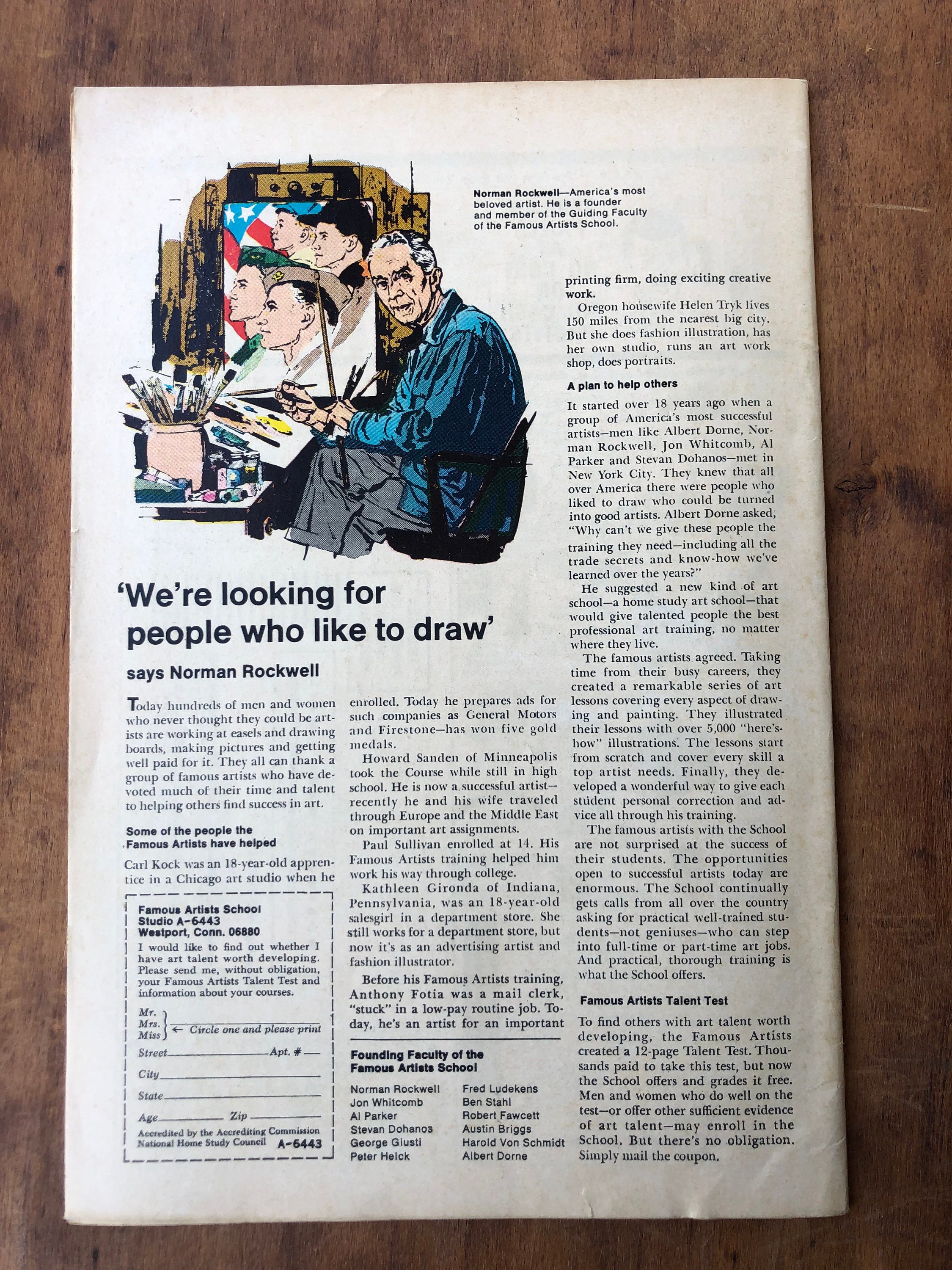 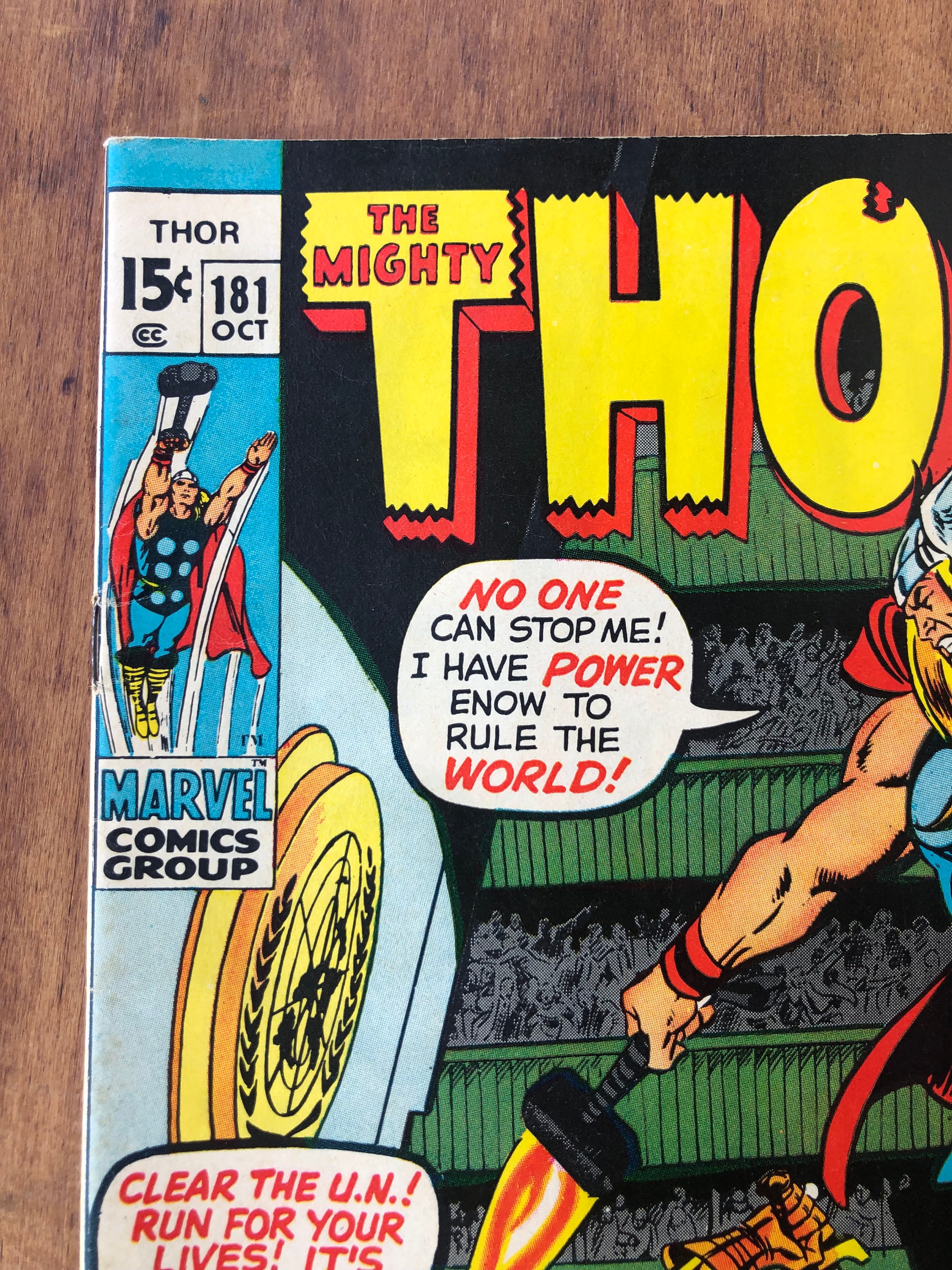 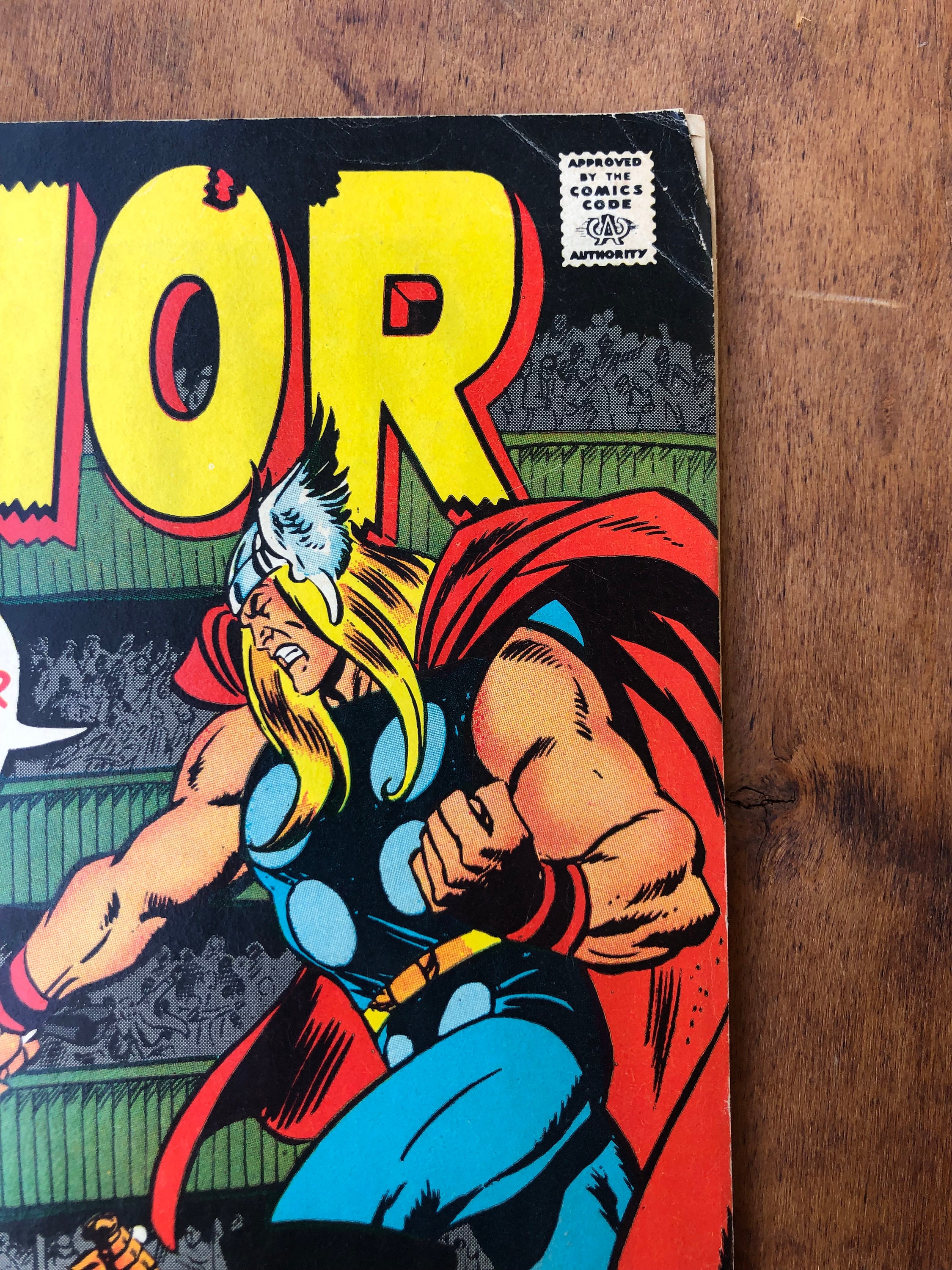 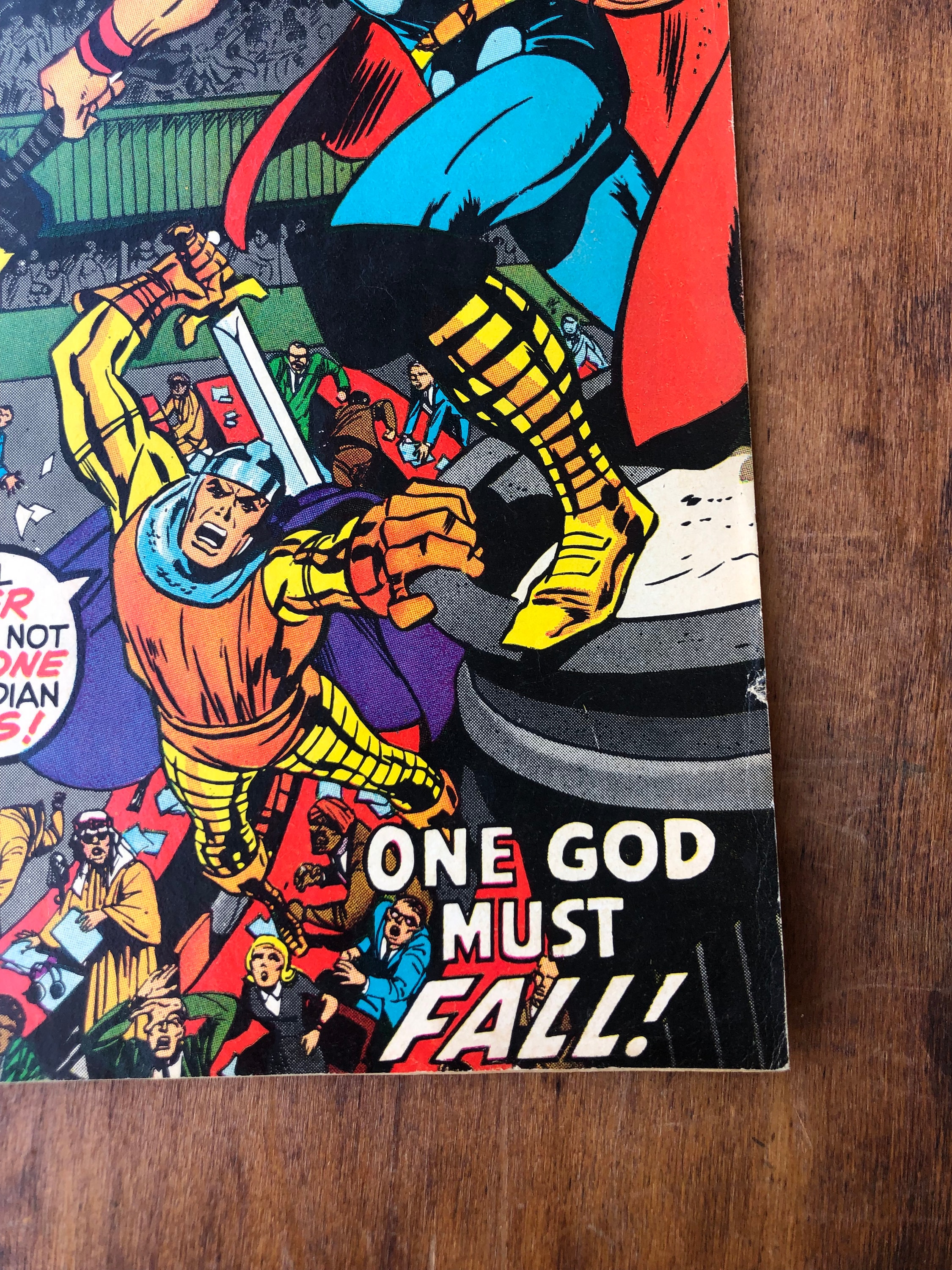 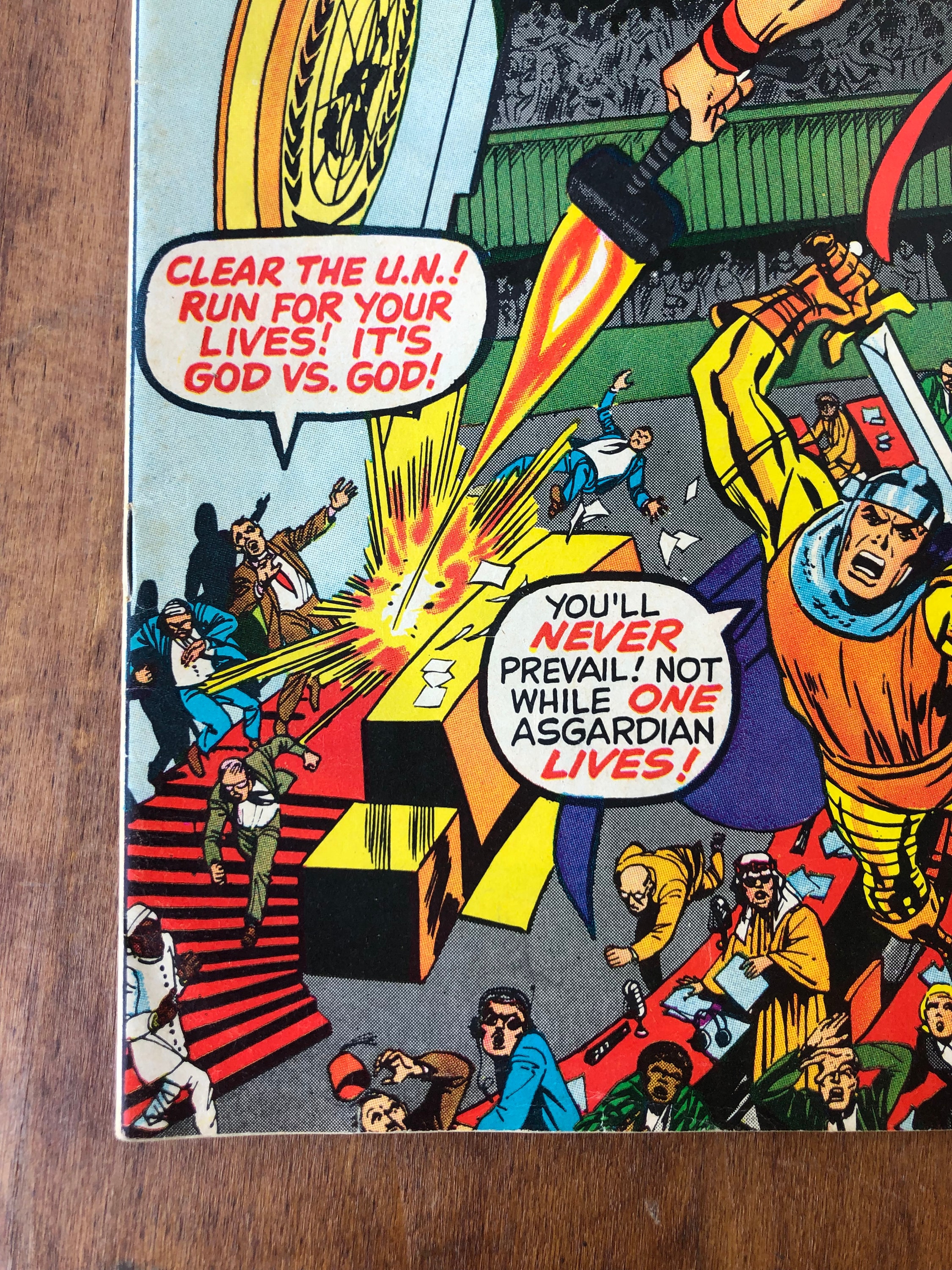 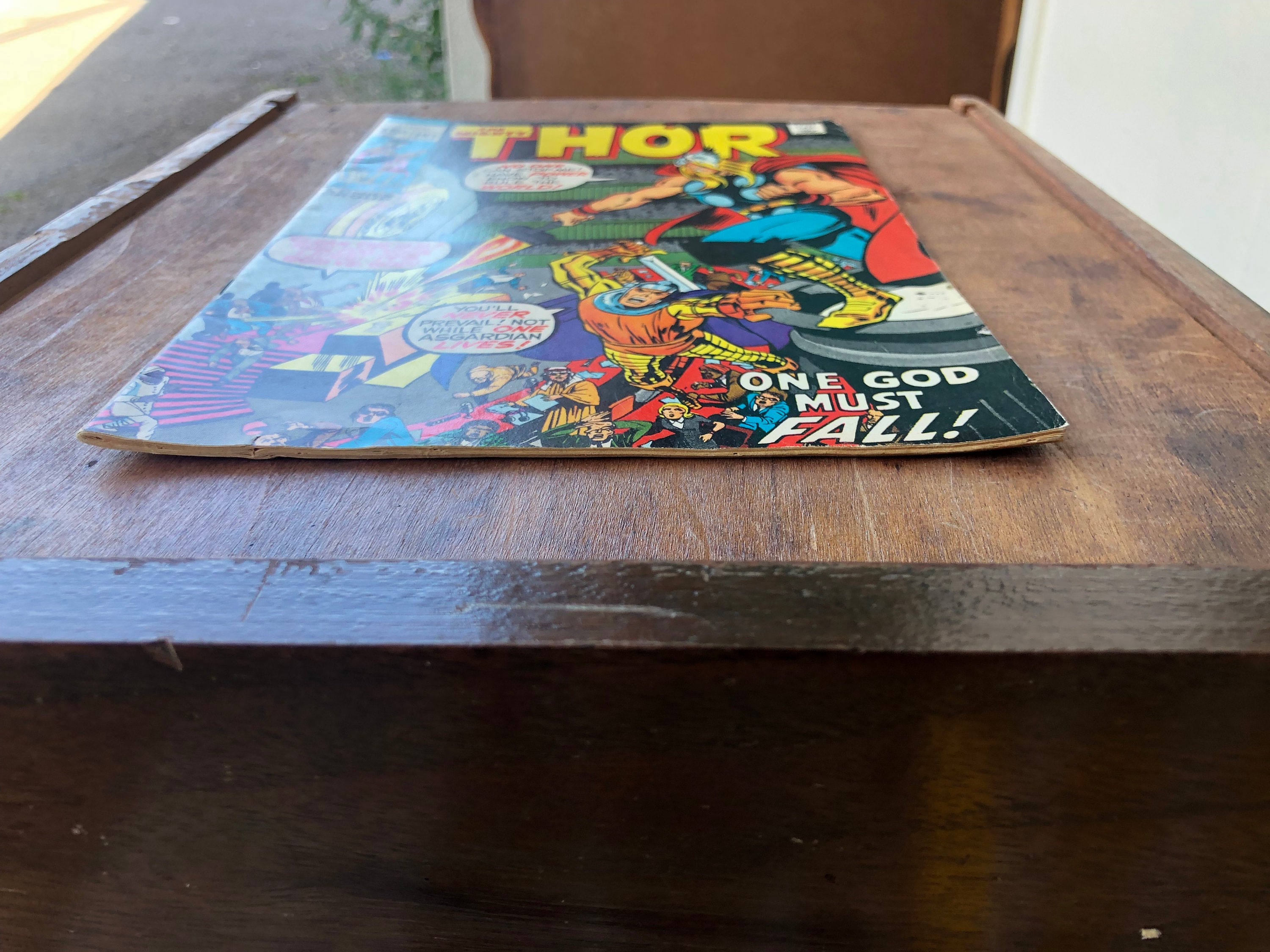 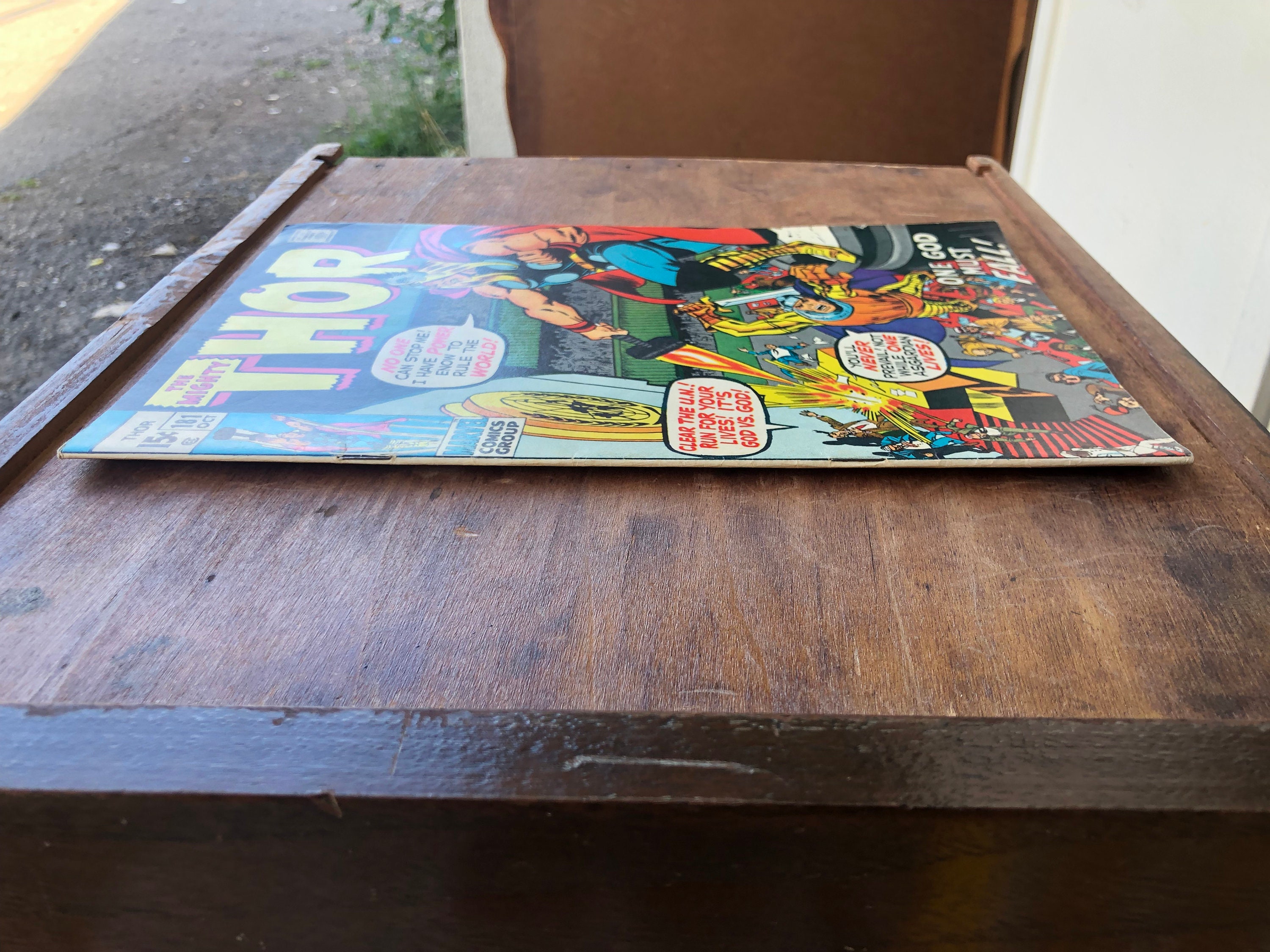 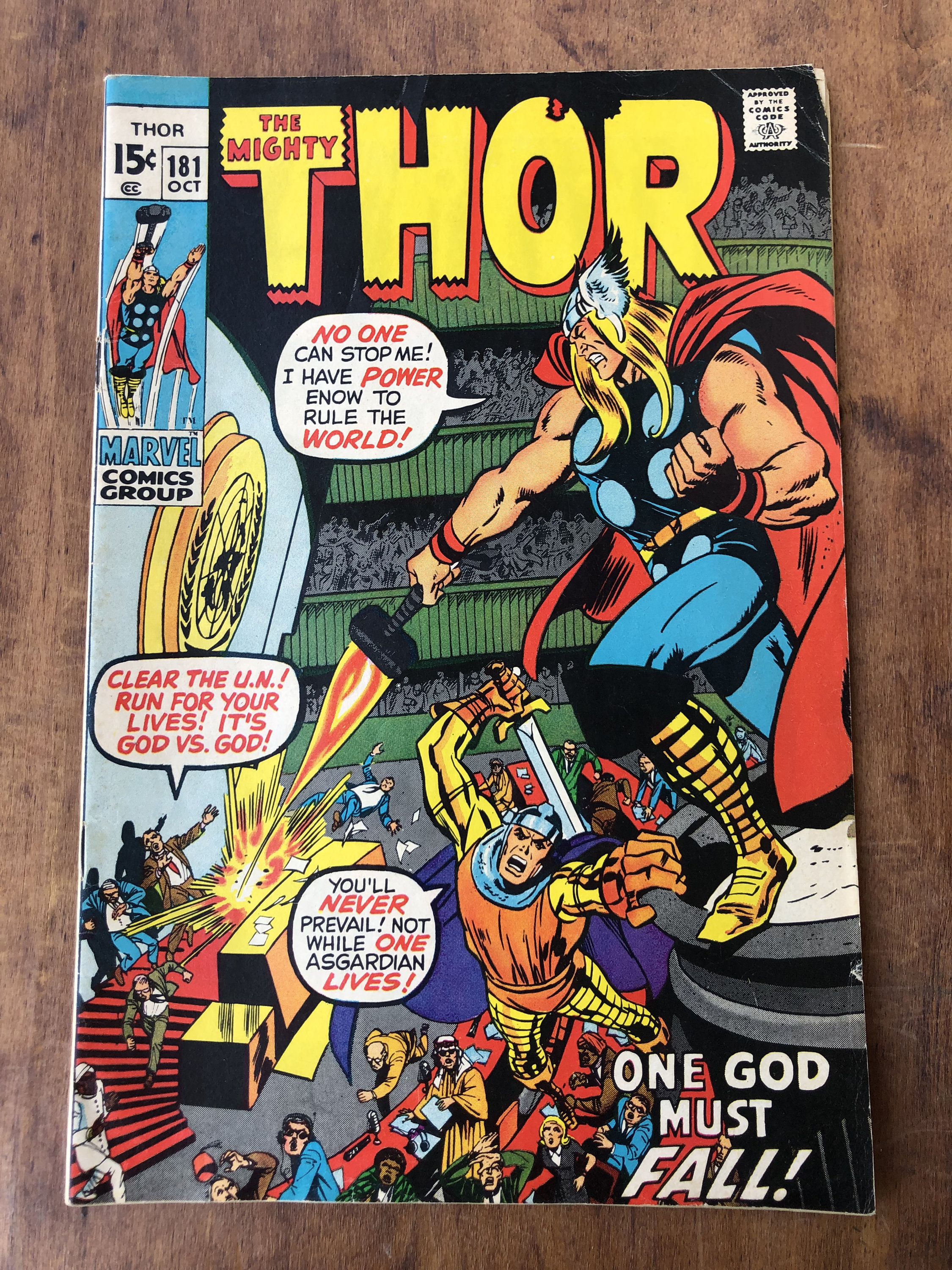 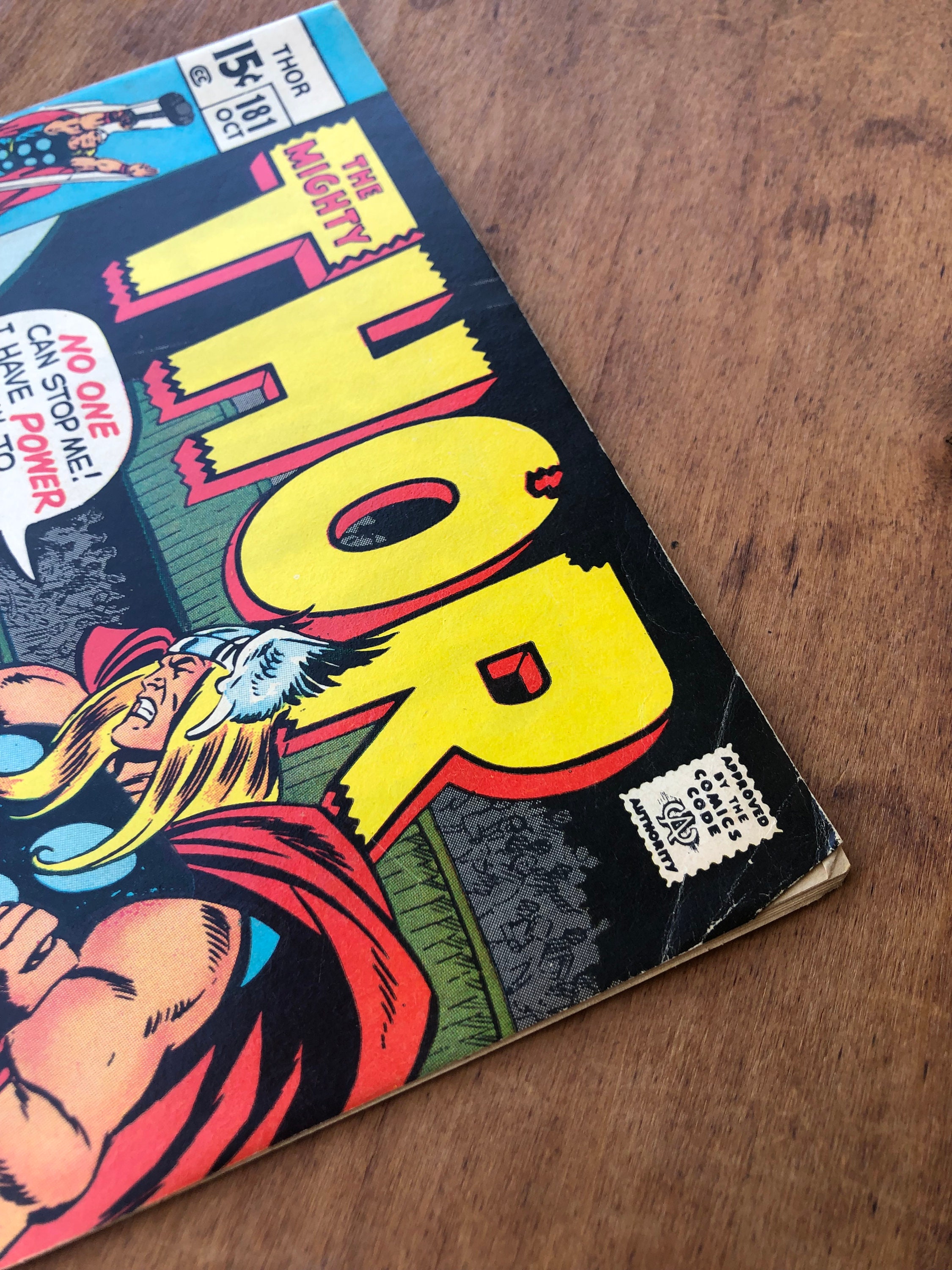 Here is a copy of The Mighty Thor #181-October 1970
It is in used, see pictures for condition.

One God Must FALL!
Trapped in Loki's body, Thor has been banished to Hades and made a prisoner of Mephisto, sending Sif and the Warriors Three to his rescue. They attempt to save Thor. However, Mephisto's magical powers and legions of demonic creatures prove too much for them. Taking advantage of the fact that he has access to Loki's magical might, Thor focuses this power to free himself from the block of ice that Mephisto had frozen him into. Thor then challenges Mephisto, who boasts that Loki is on Earth, ruining his good name.

This is not an idle boast either, as Loki -- in Thor's body -- has the entire United Nations building hostage and demands that the world leaders turn the entire Earth over to him. The UN leaders, thinking Loki is Thor, refuse to surrender their world to him. Before Loki can react in retribution, Balder appears to battle Loki once more. Blader goads Loki into breaking his cover and attempting to use his magical powers against Balder and realizes that he lost his magical prowess when he switched bodies with Thor. Undaunted, Loki attempts to harness Thor's hammer's full power to use against Balder.

While down in Hades, Thor uses those same powers to free his friends and then defeats Mephisto by radiating his inner goodness, causing the hell-lord extreme pain. Surrendering, Mephisto transports them all back to Asgard. Knowing that Heimdal will not let him pass the Bifrost bridge while he wears Loki's body, Thor sends Sif and the Warriors Three back while he travels to Earth to deal with Loki personally. While in the throne room of Odin, the Great Vizier what has been happening, and to his surprise, Odin tells the Vizier that he knew the truth all along.

Thor arrives on Earth just to see that Loki and Balder's battle has taken them to a construction site where Loki bested the brave warrior in battle. Thor battles Loki, hoping his half-brother can be separated from the mystic hammer in his hands. When the opportunity presents itself, Thor charges at Loki and lets him pummel him. As Thor had hoped, when the 60-second time limit that Thor's body can be separated from his hammer has come to pass, Loki's body reverts into the form of Donald Blake, which then causes the body to switch to reverse itself, restoring Thor to his own body.

As Donald Blake, Thor rushes to his walking stick and manages to tap it on the ground changing back into Thor. With Loki back in his own body (now ironically beat up and bruised following the beating he gave it), Loki is forced to retreat, vowing to get revenge against Thor. With the battle over, Thor soars off into the sky, triumphant.