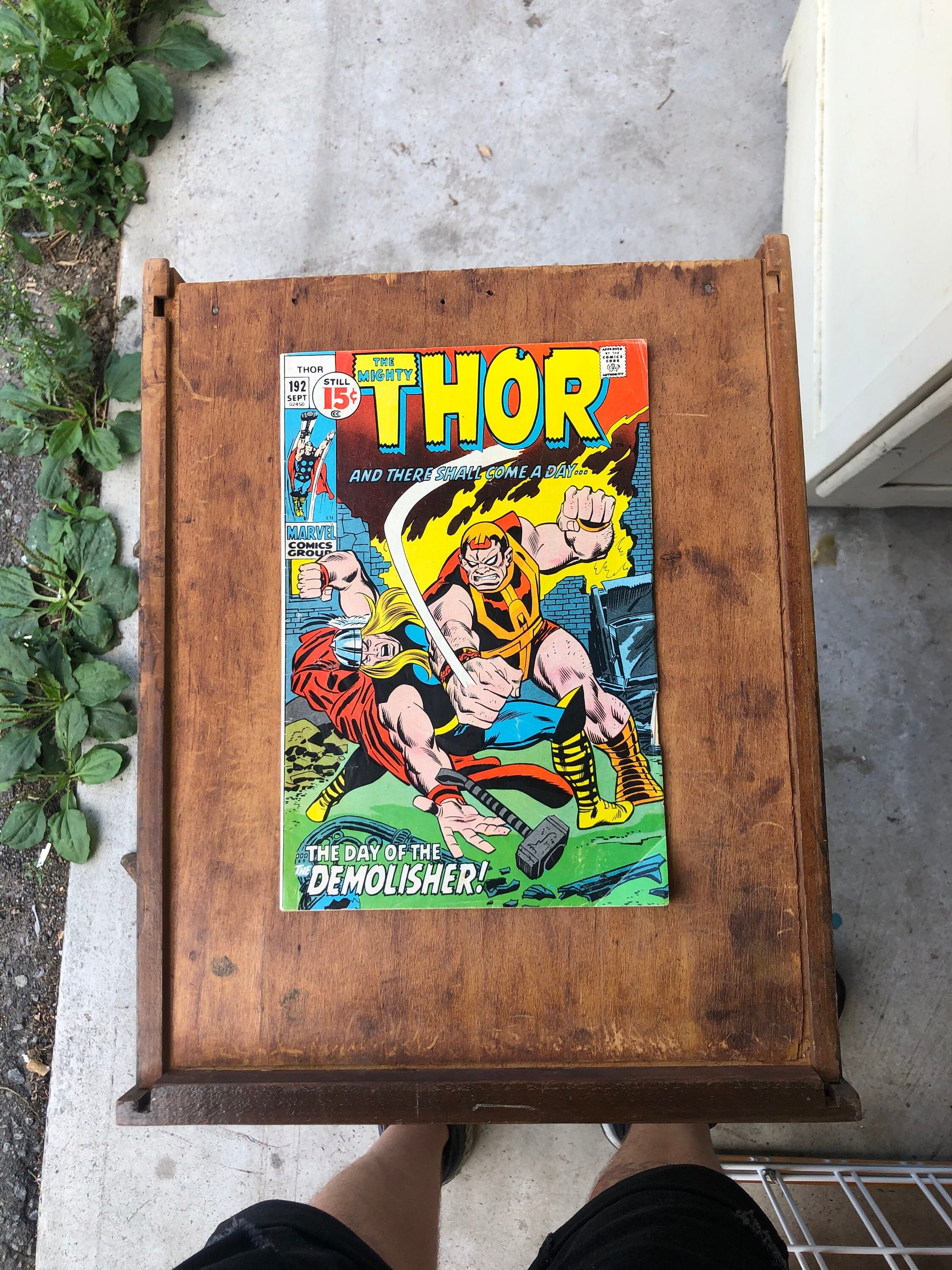 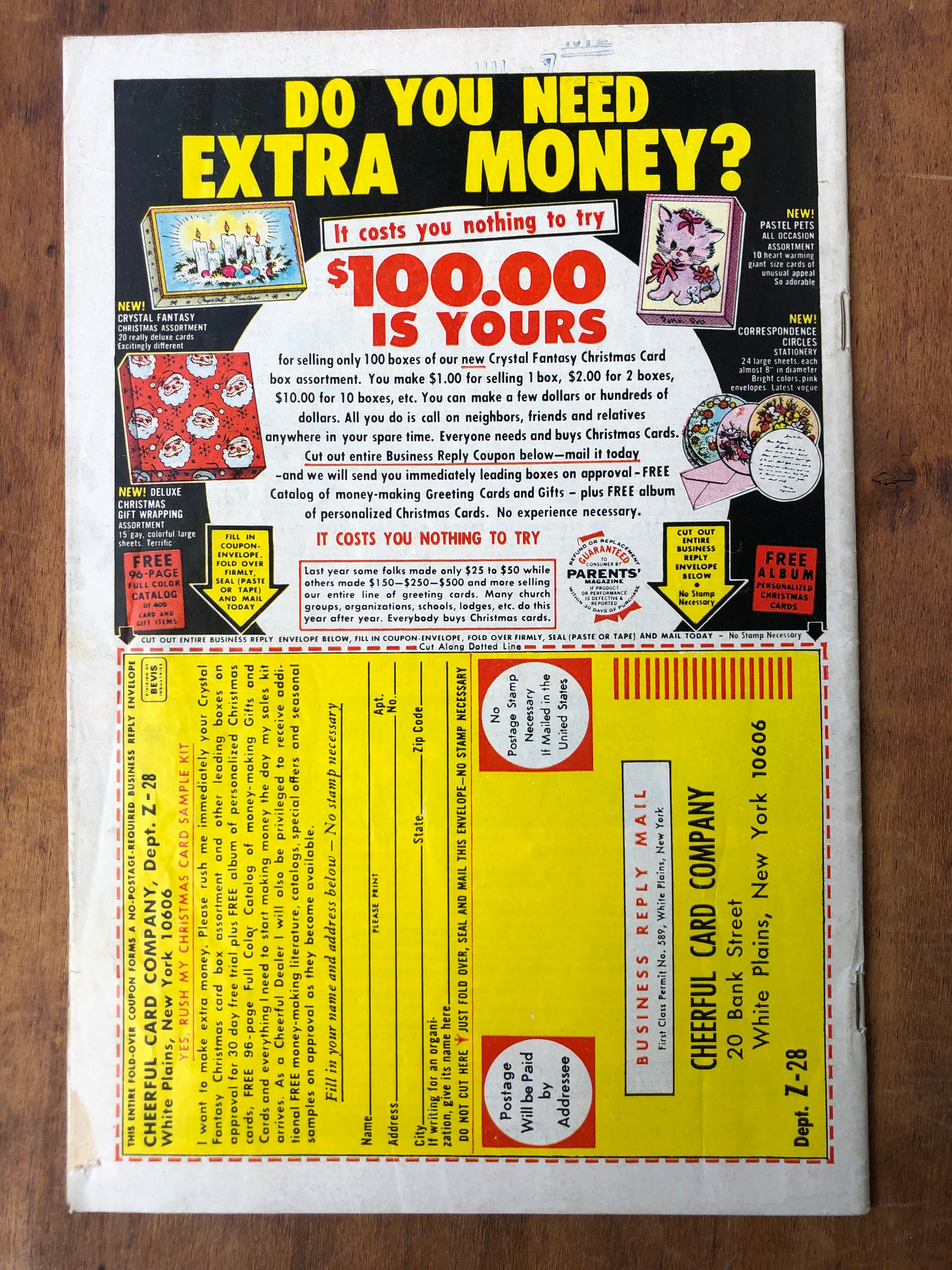 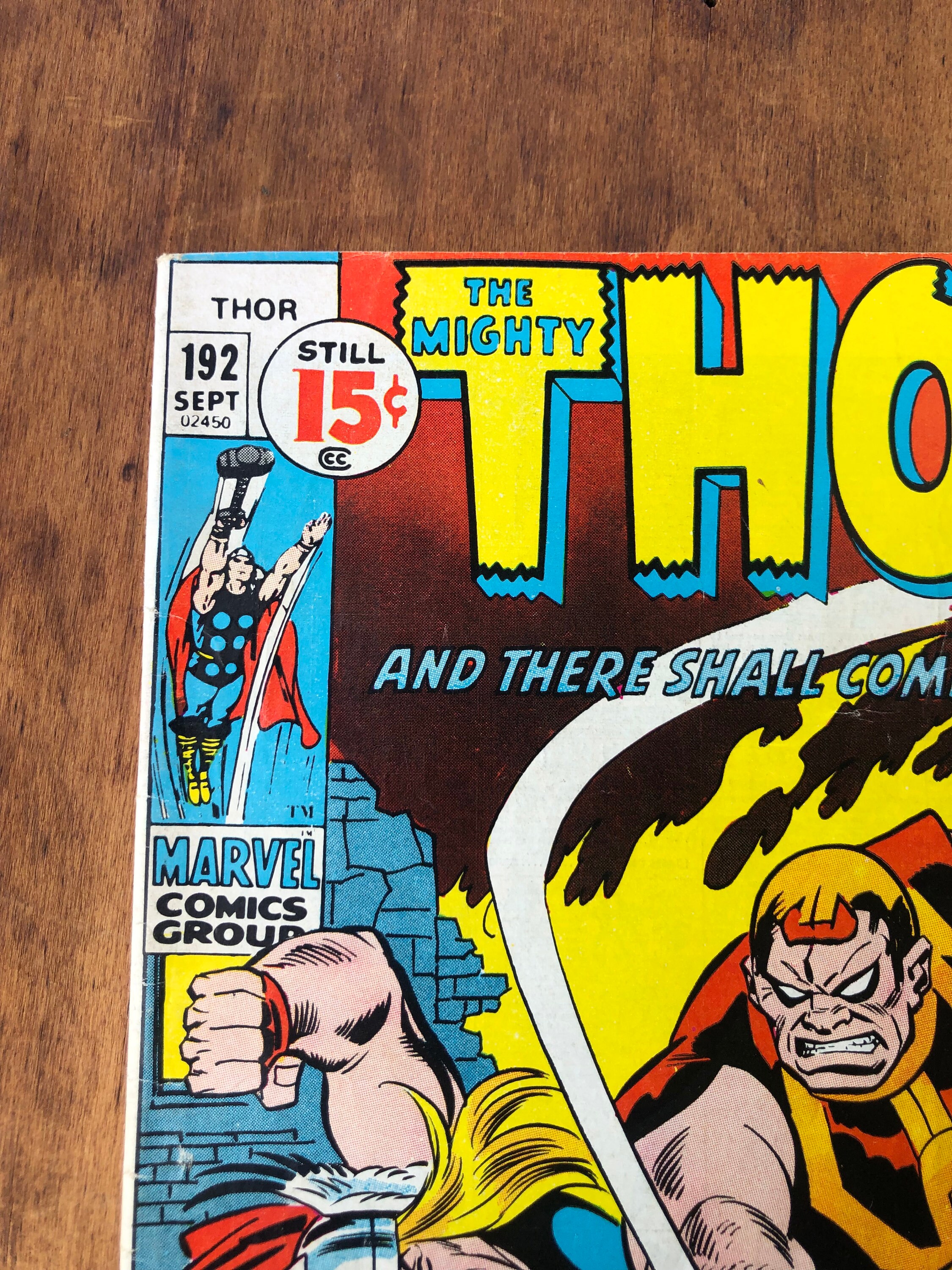 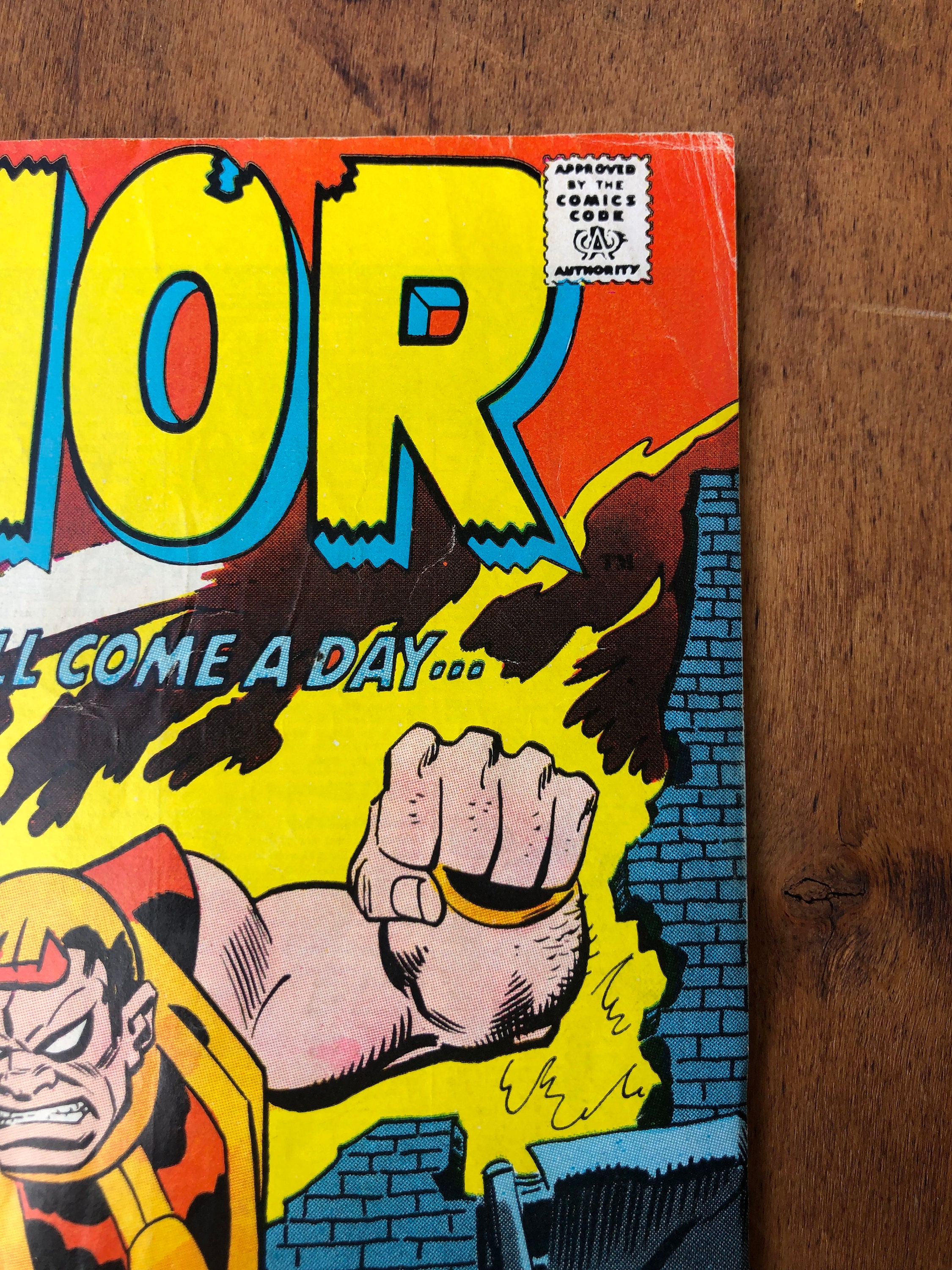 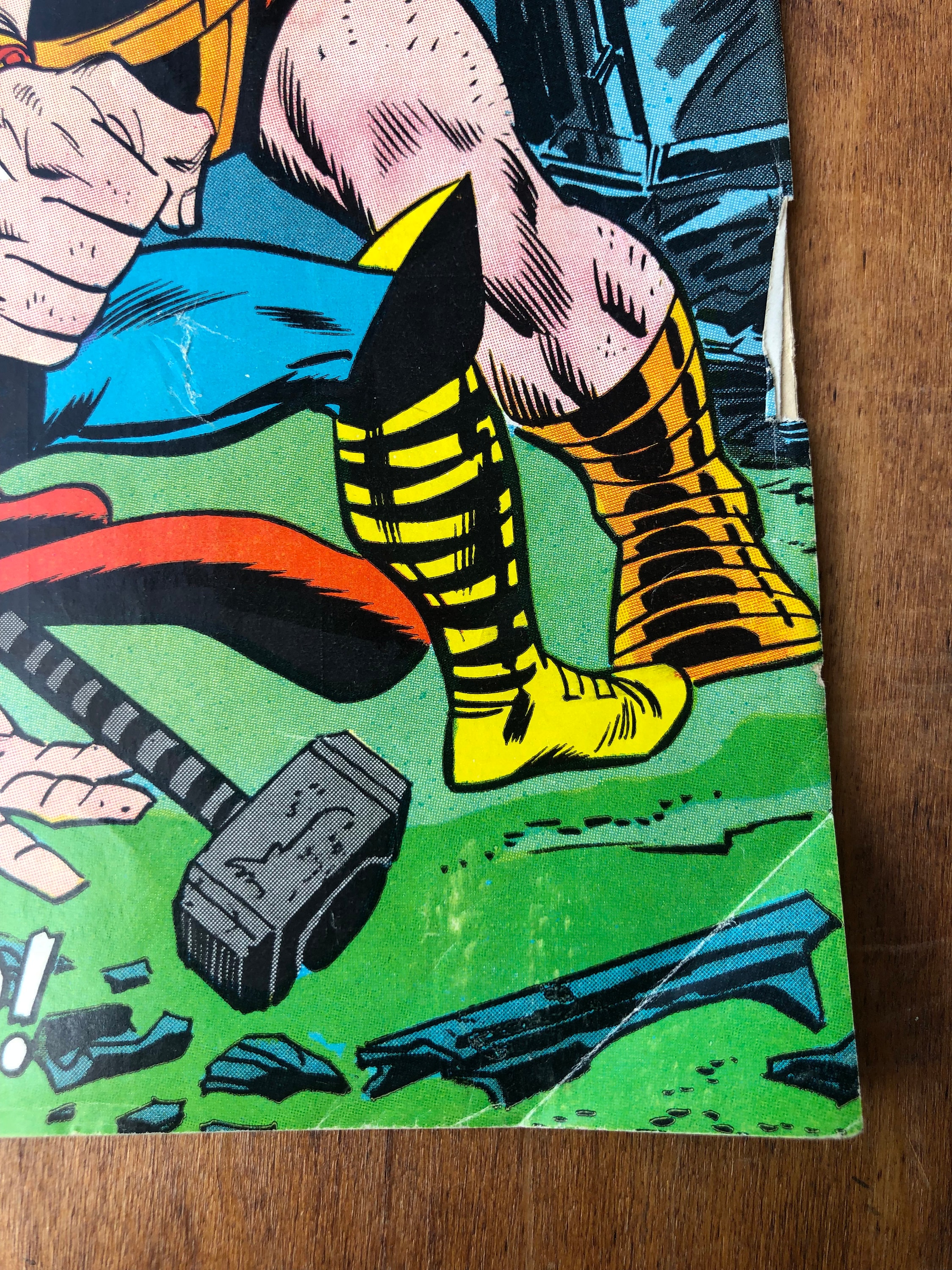 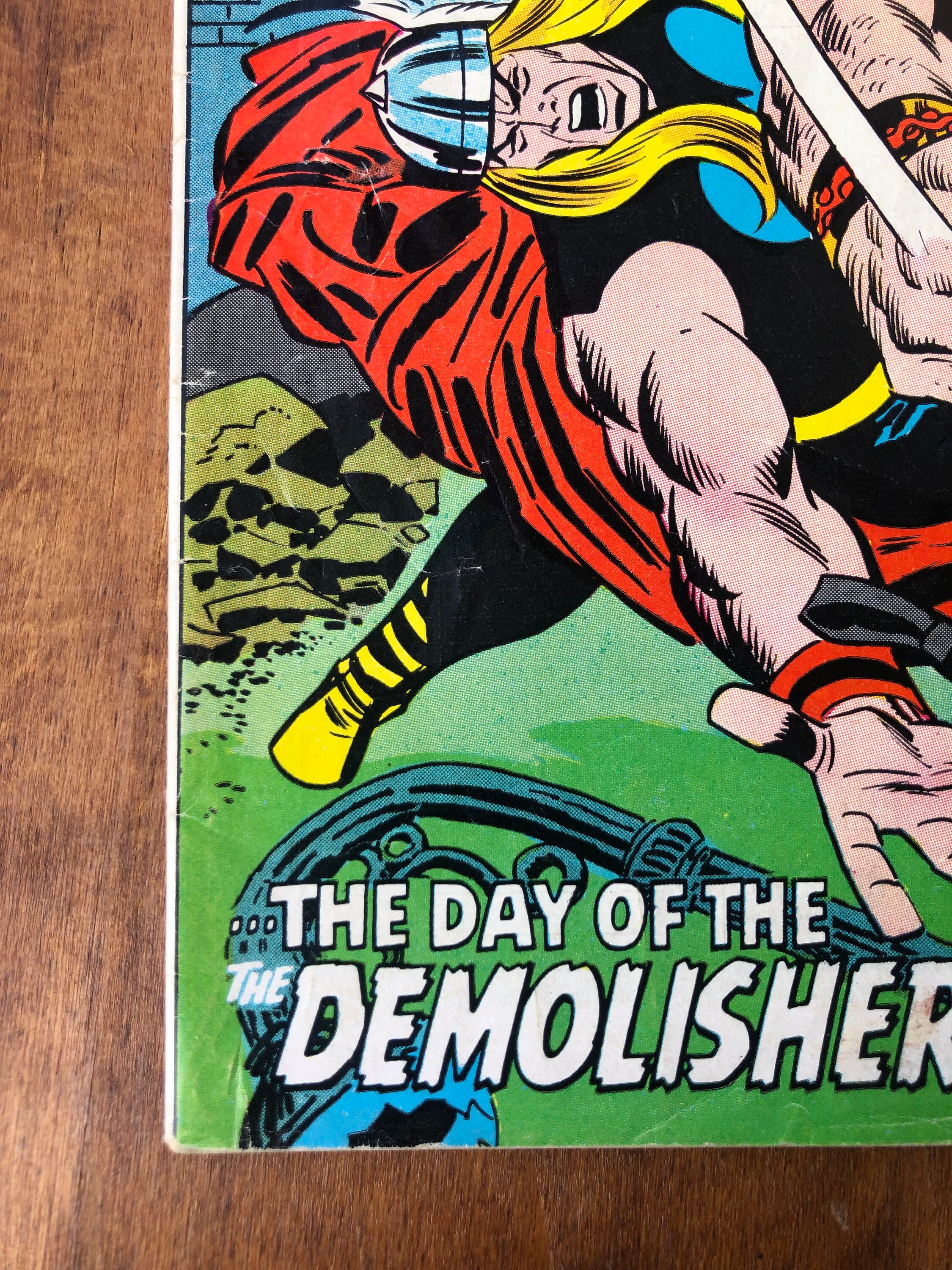 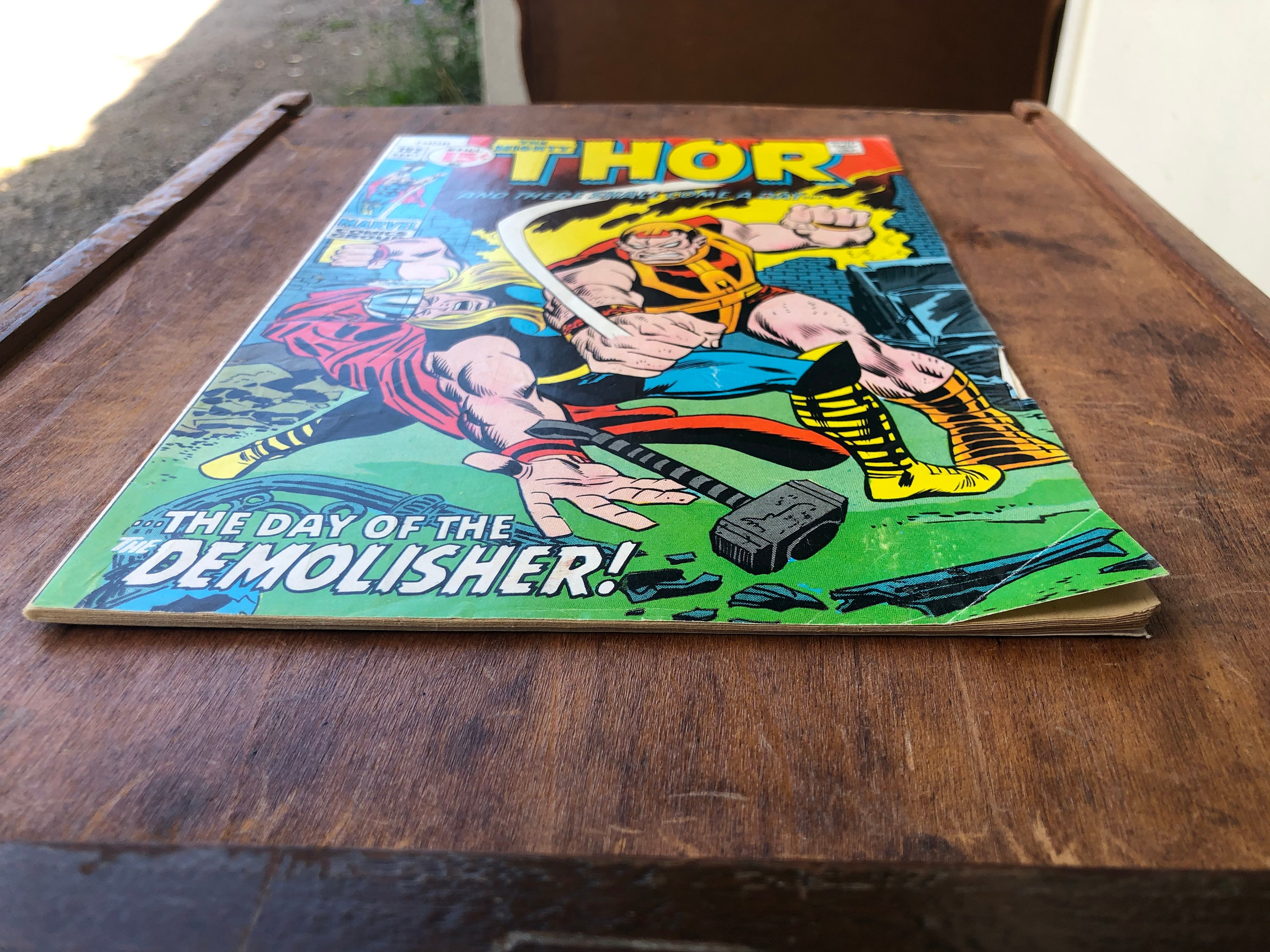 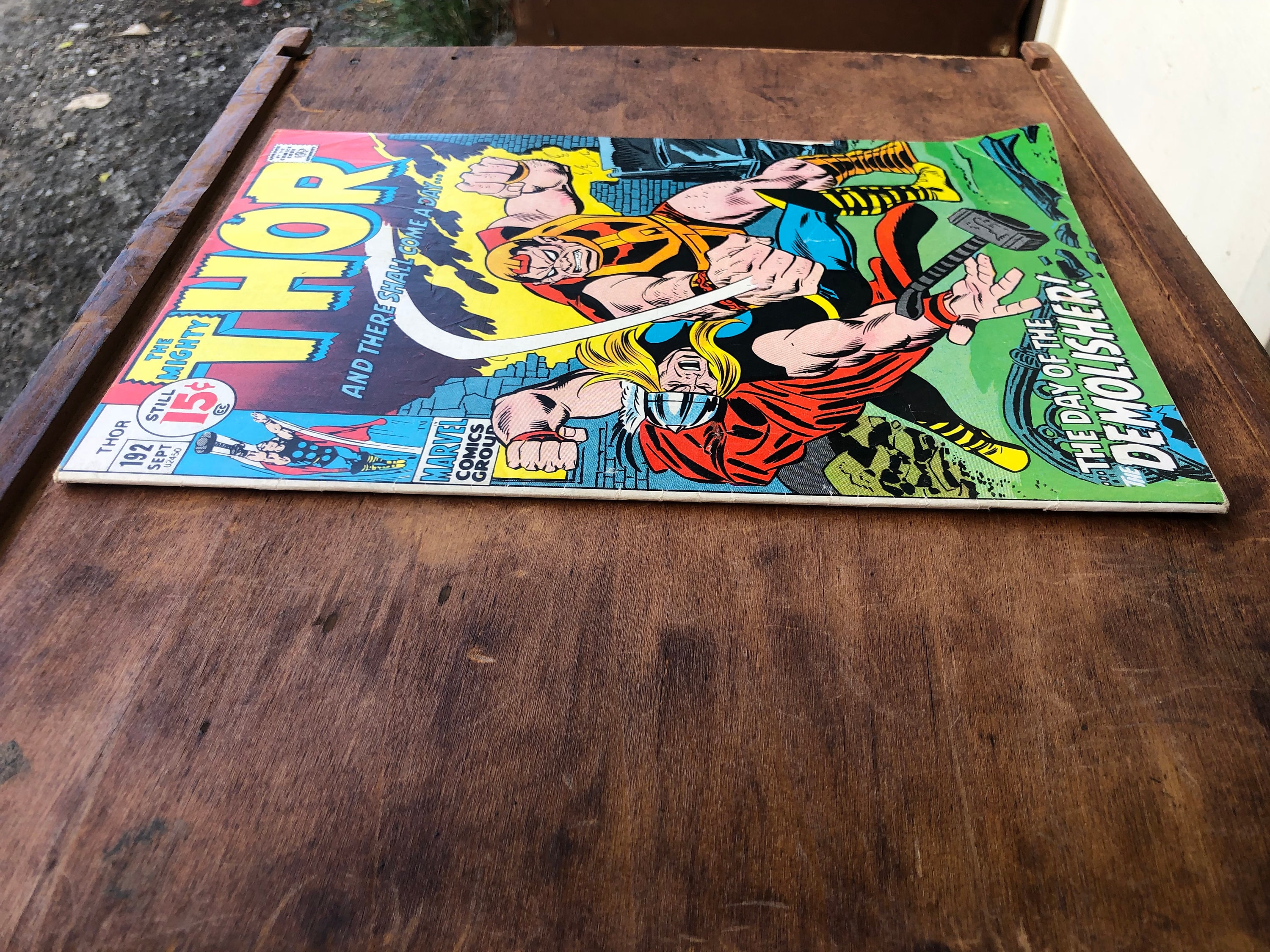 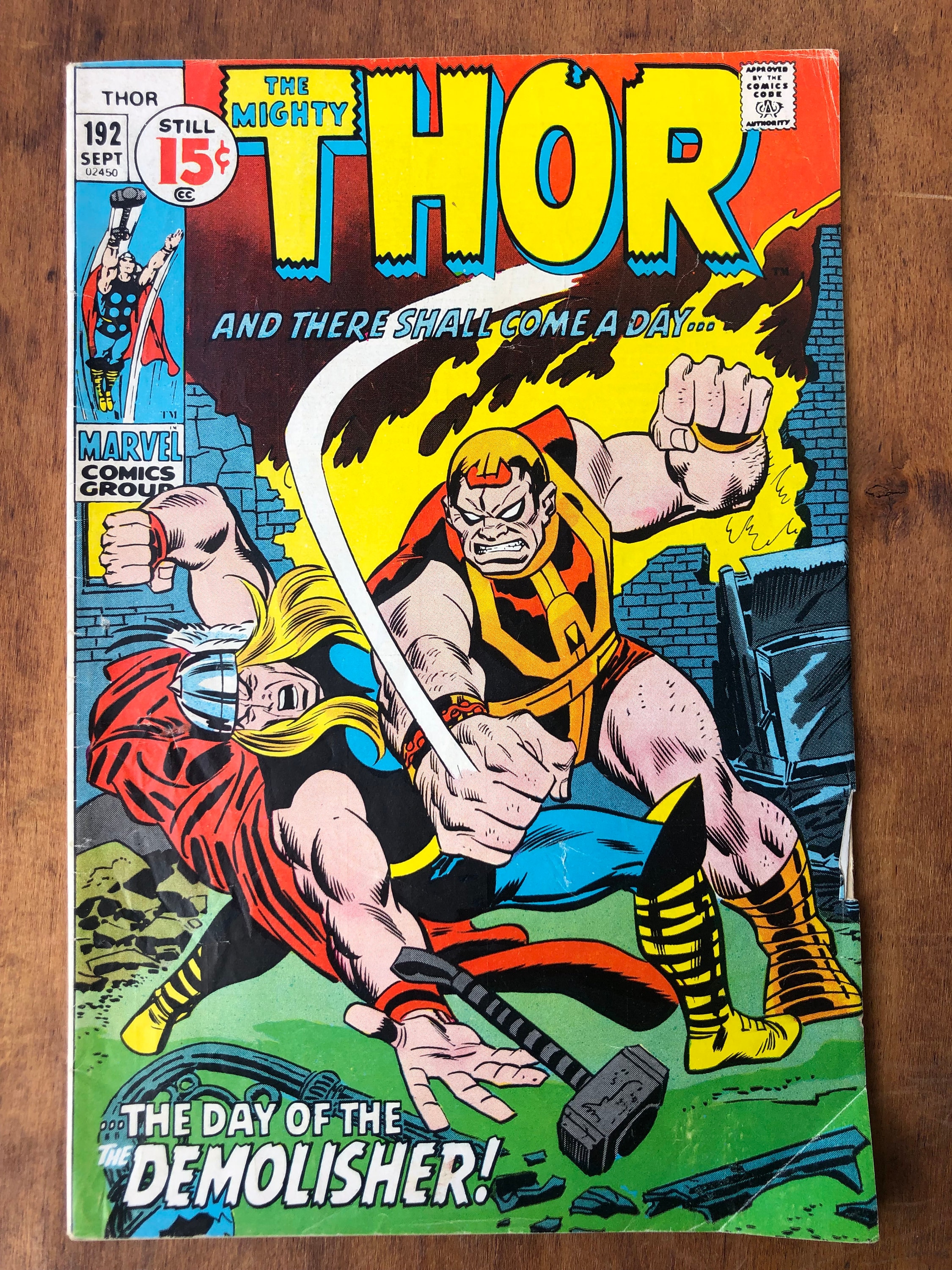 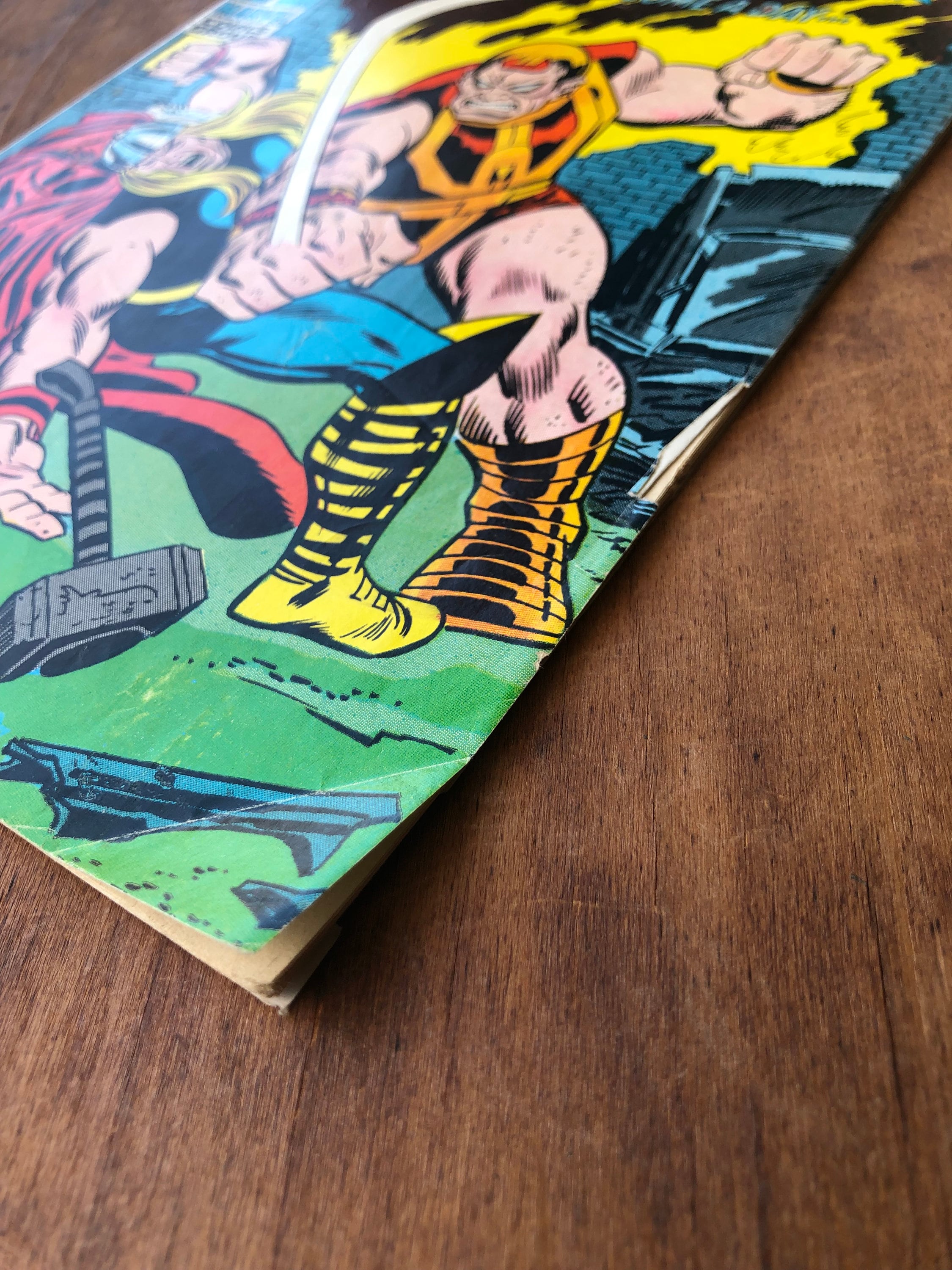 Here is a copy of The Mighty Thor #192- September 1971
It is in used, see pictures for condition.


CONFLAGRATION!
Loki boasts that his new creation, Durok the Destroyer, will prove to be the end of Thor after sending both to Earth to fight it out. Furious at Loki's evil, Hogun attempts to strike the trickster with his mace. However, Loki deflects it and is about to sentence the Warriors Three to death when Sif manages to talk Loki out of it. Loki then decides to turn his attention to Earth to watch the battle between Thor and Durok.

On Earth, Durok appears in New Orleans during Mardi Gras and begins to rampage through a parade when Thor arrives to battle him. Realizing the creature is incredibly strong and that there are too many innocents around, Thor uses his hammer to teleport everyone away to safety as he resumes his battle against Durok. Watching from Asgard, Loki is furious that Thor continues to fight on and decides that he will change the battlefield to a more suitable location and teleports Durok away.

After returning the people to their Mardi Gras festivities, Thor flies off to search for Durok. He finds Durok in a small South American nation ruled by a tyrannical military leader. Durok's rampage is mistaken by "El Presidente" as a citizens revolt and soon finds his army overpowered. He then abdicates his position allowing the people have a free vote.

While back in Asgard, Loki and Karnilla watch over the battle as Thor arrives to fight Durok. Balder approaches Karnilla and asks for her aid to help Thor. When Karnilla reminds him of his loyalty to her (and commands him not to battle Loki), Blader tells her that he will not fight the usurper to the throne. When the Warriors Three create a distraction by angering a Storm Giant, Karnilla and Balder teleport themselves to Earth. They appear in New York City, where Balder sends a mystical signal to summon someone who might help Thor.

While back in South America, Durok once more can overpower Thor in combat, but the fight is once more abruptly ended when Loki teleports Durok away. Loki then appears in an astral projection with Sif and boasts that he sent Durok to destroy the United Nations Building in New York City to destroy it as the first step in his destruction of mankind. Loki then boasts that Thor will be killed in battle and that Loki will then make Sif his queen. Loki then mockingly disappears once more, knowing Thor will go to stop Durok no matter what.

While up on Mount Everest, Balder once more sends the signal to the one he seeks to contact. This time he succeeds in summoning the one he is looking for: The Silver Surfer.