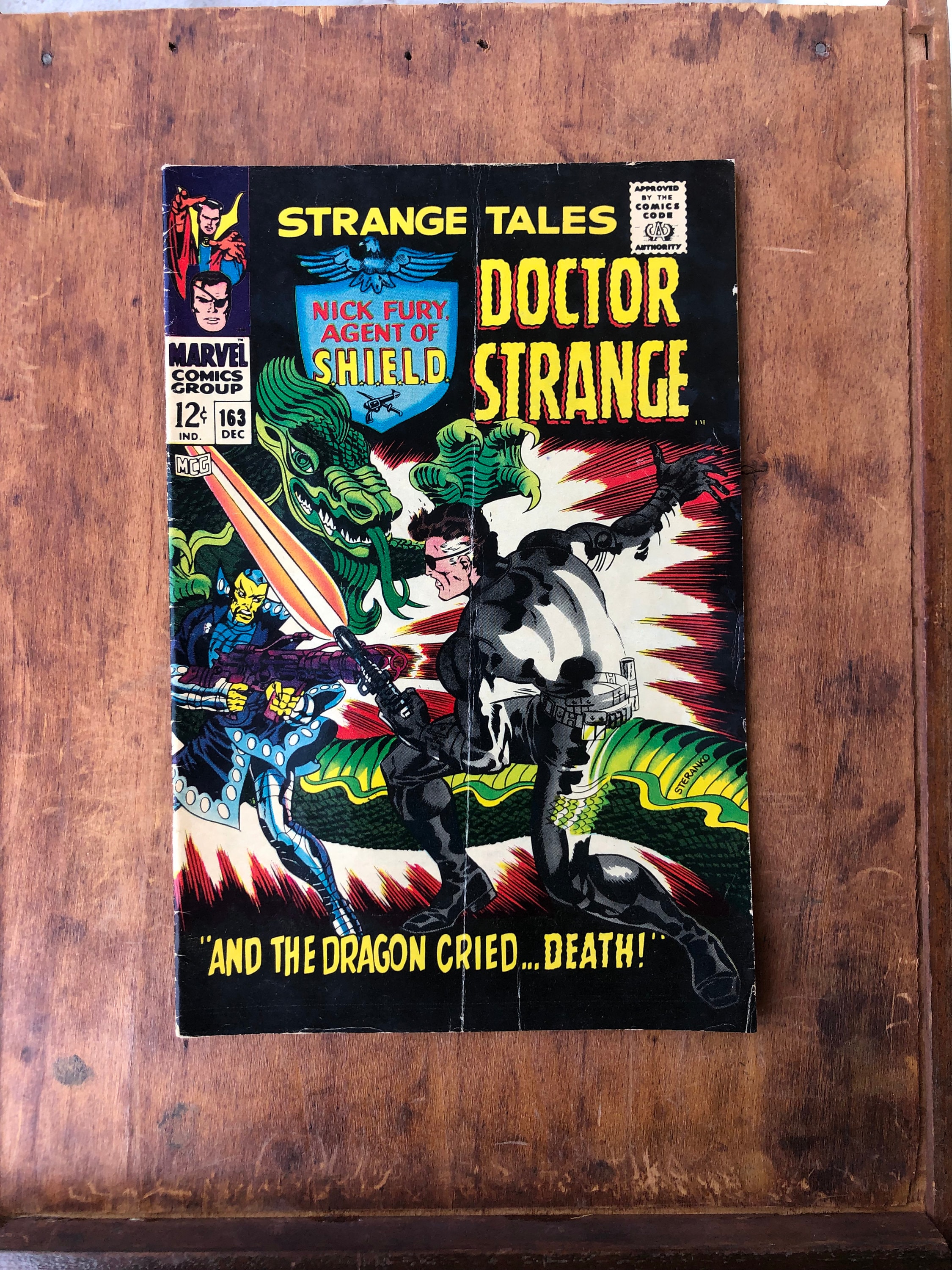 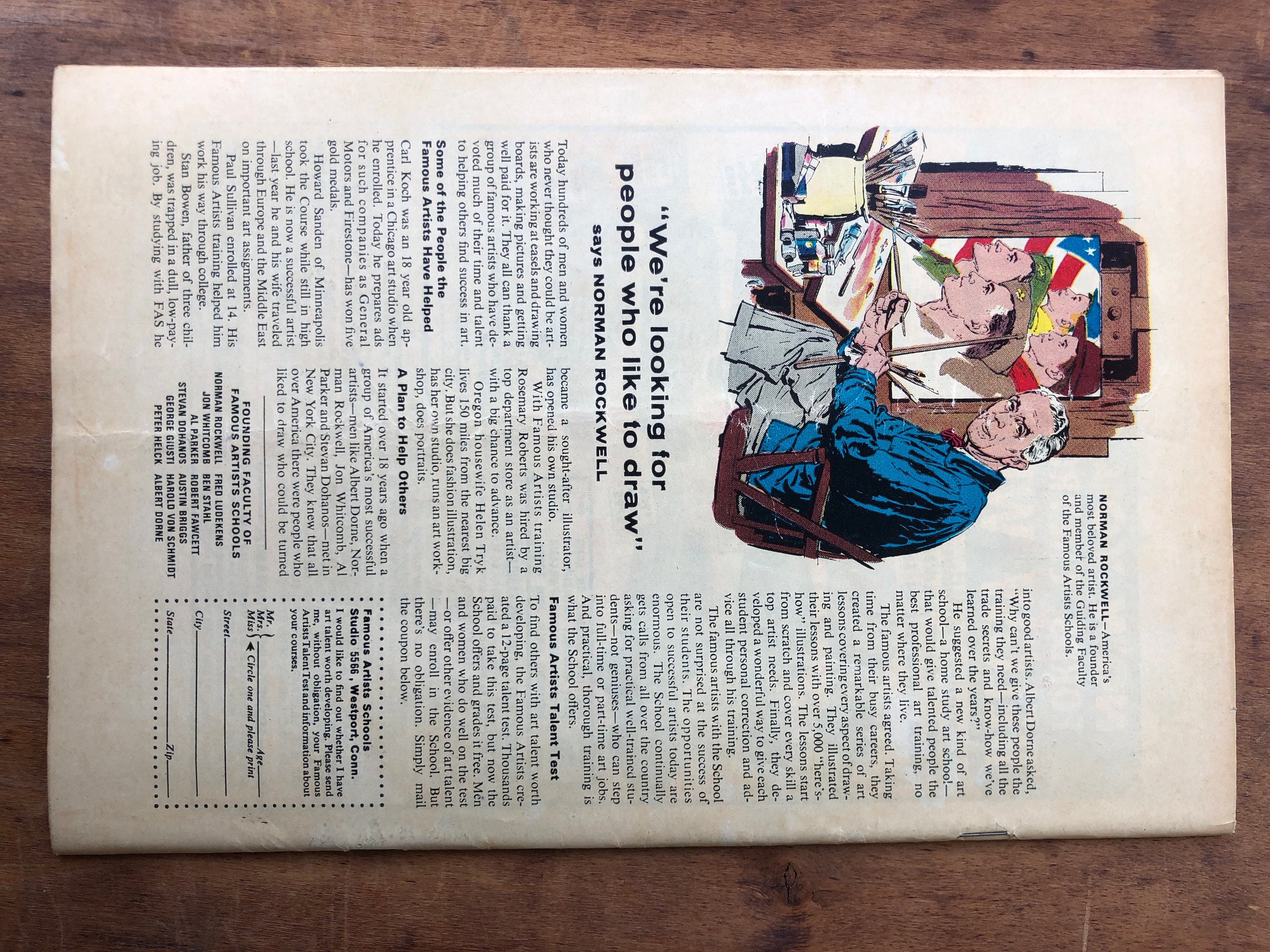 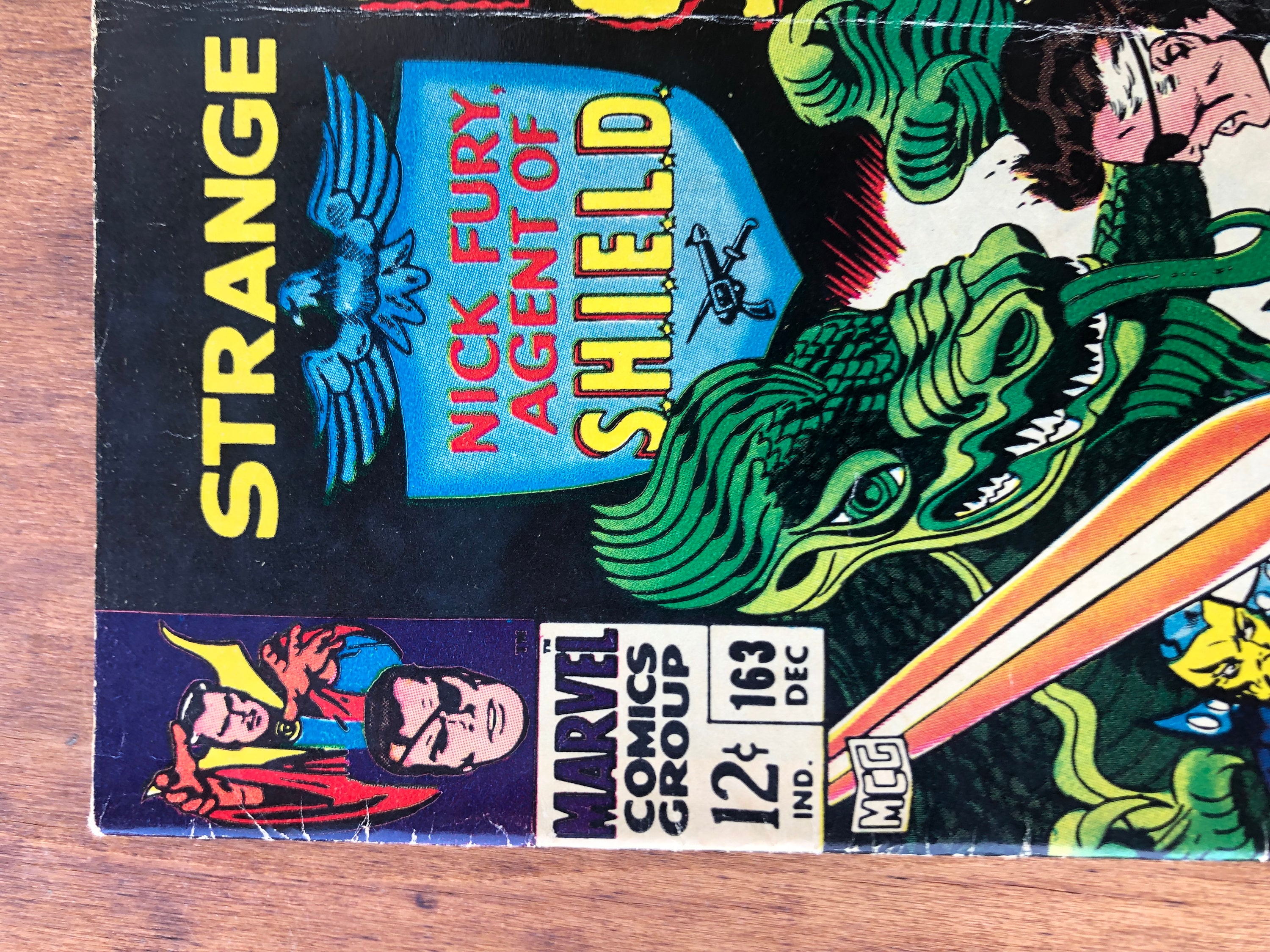 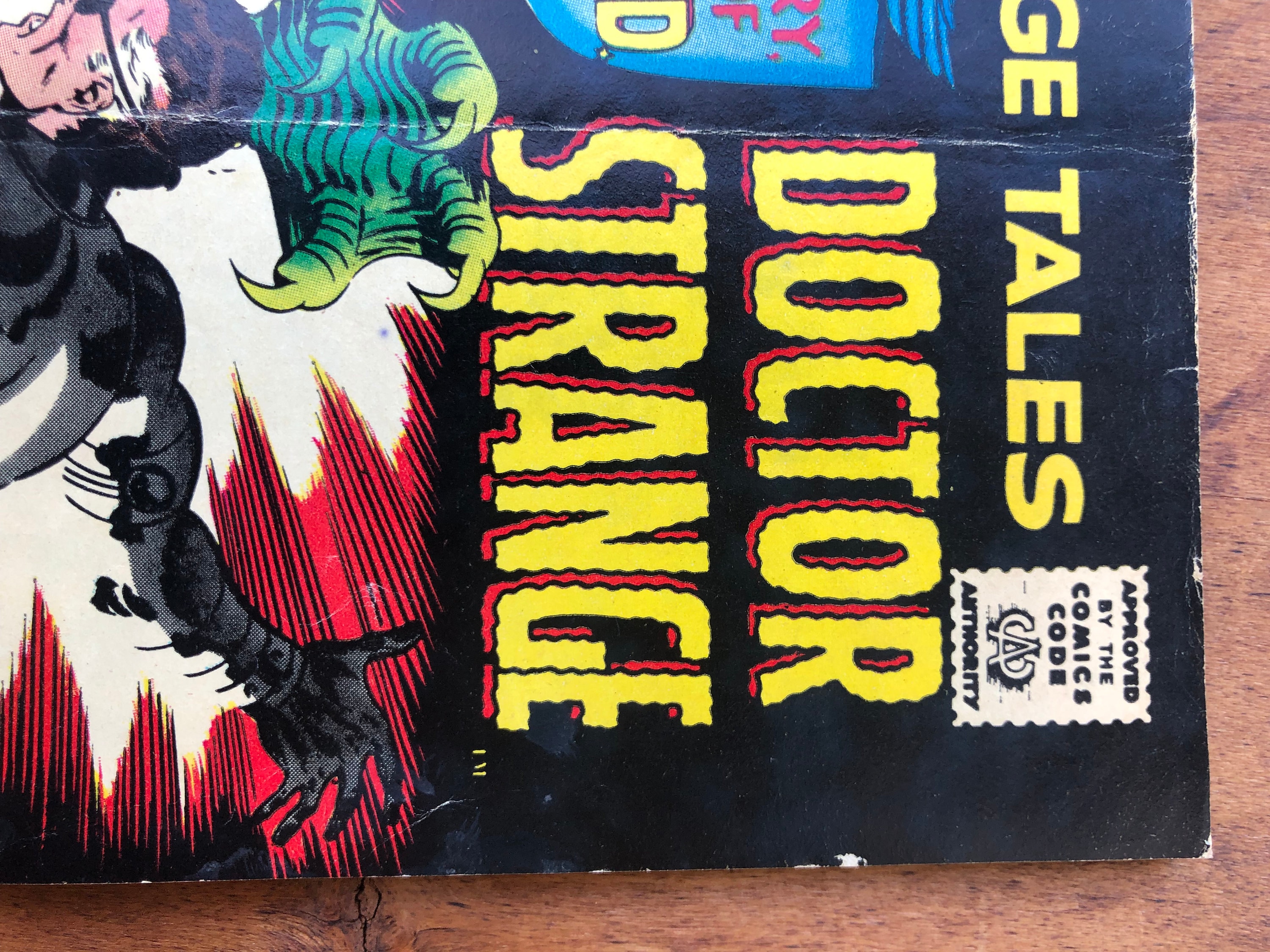 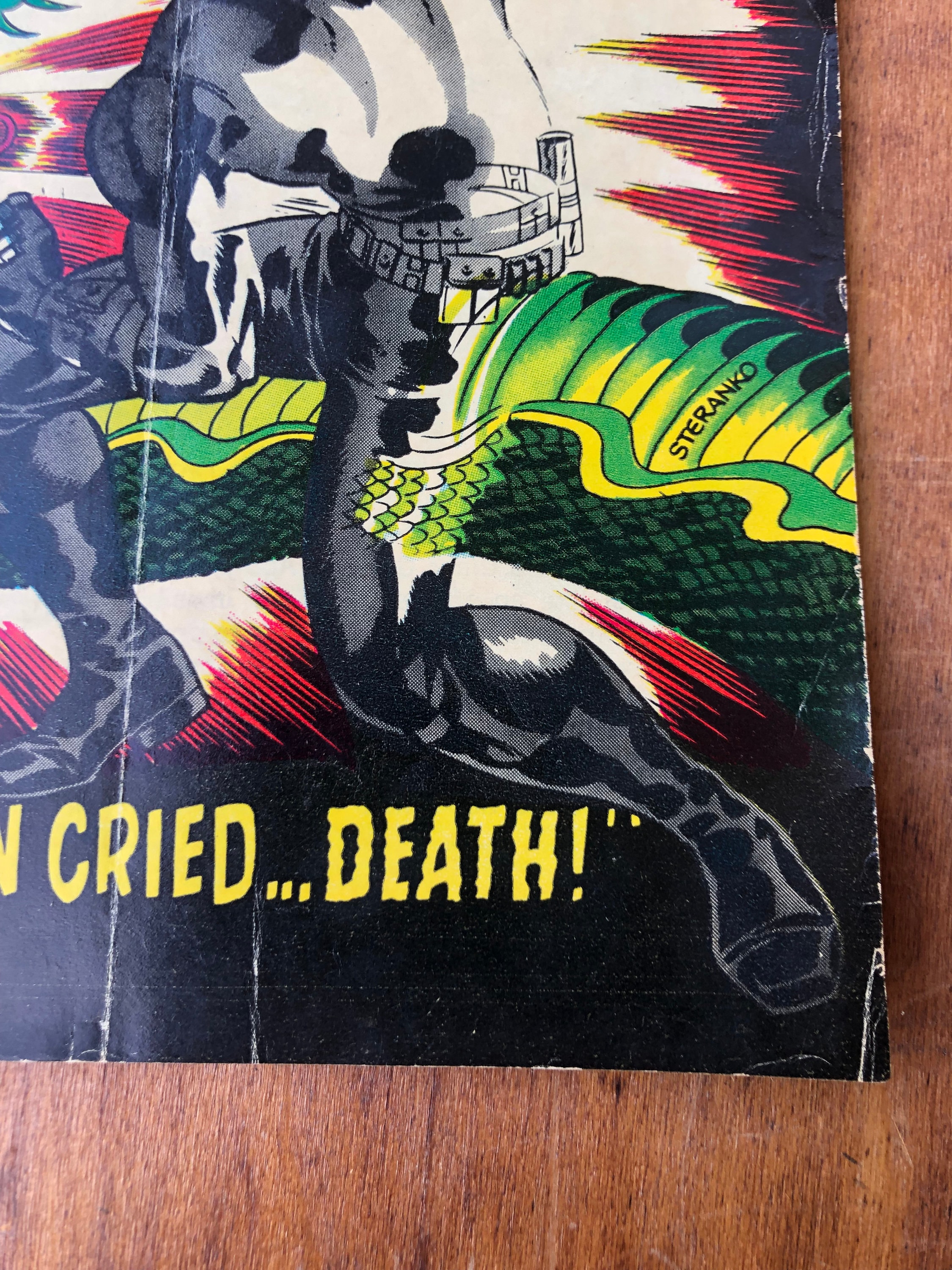 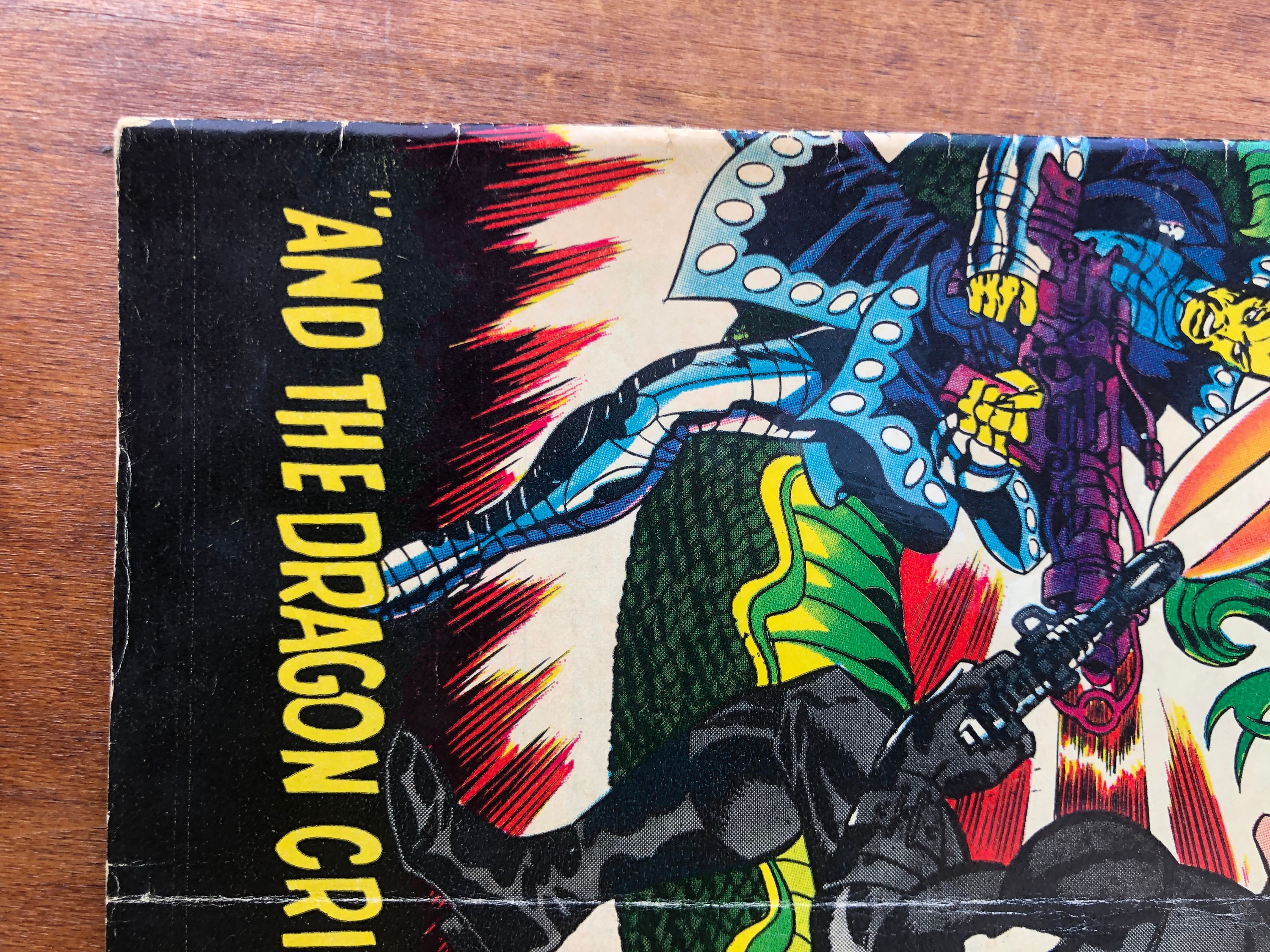 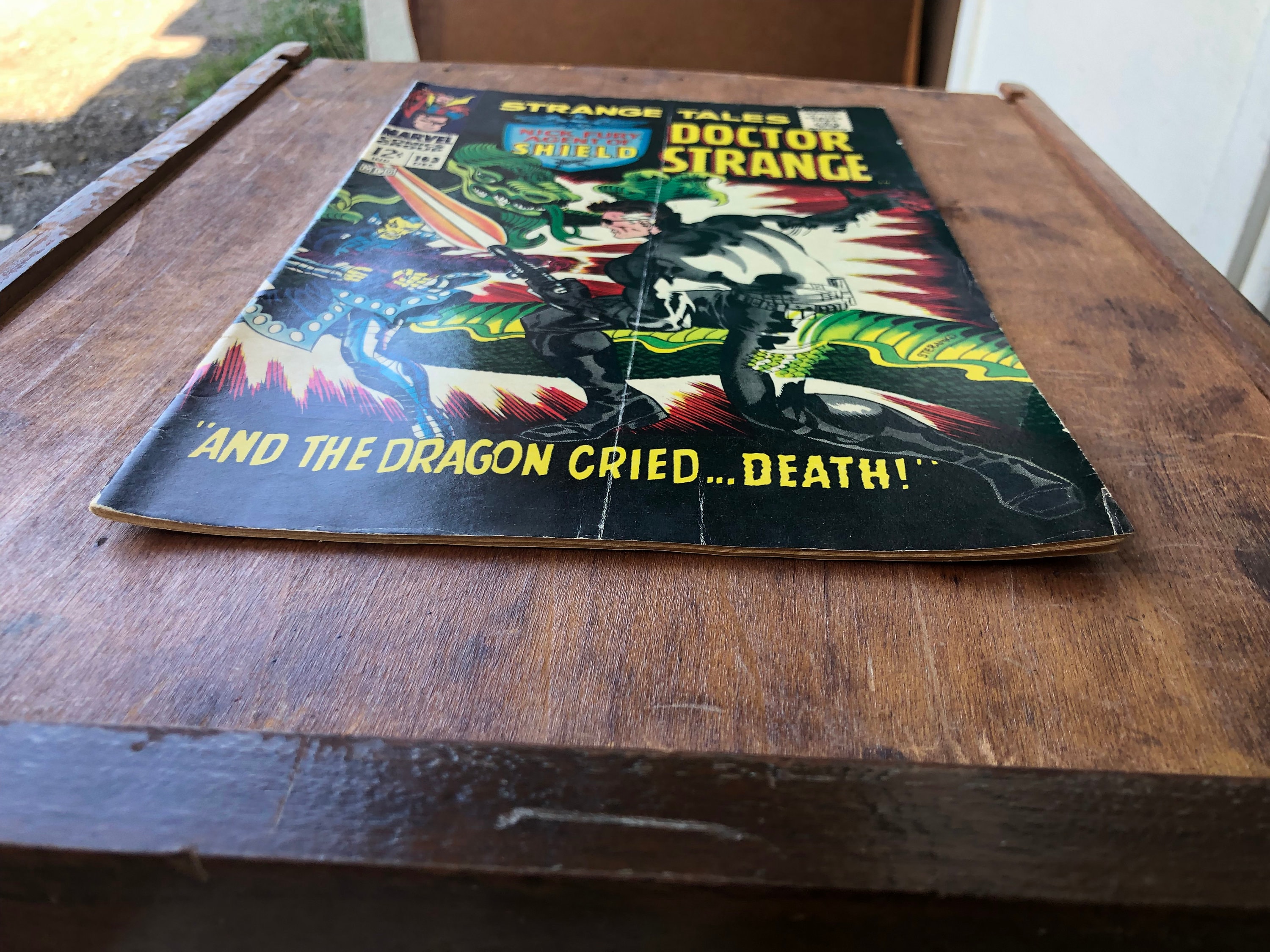 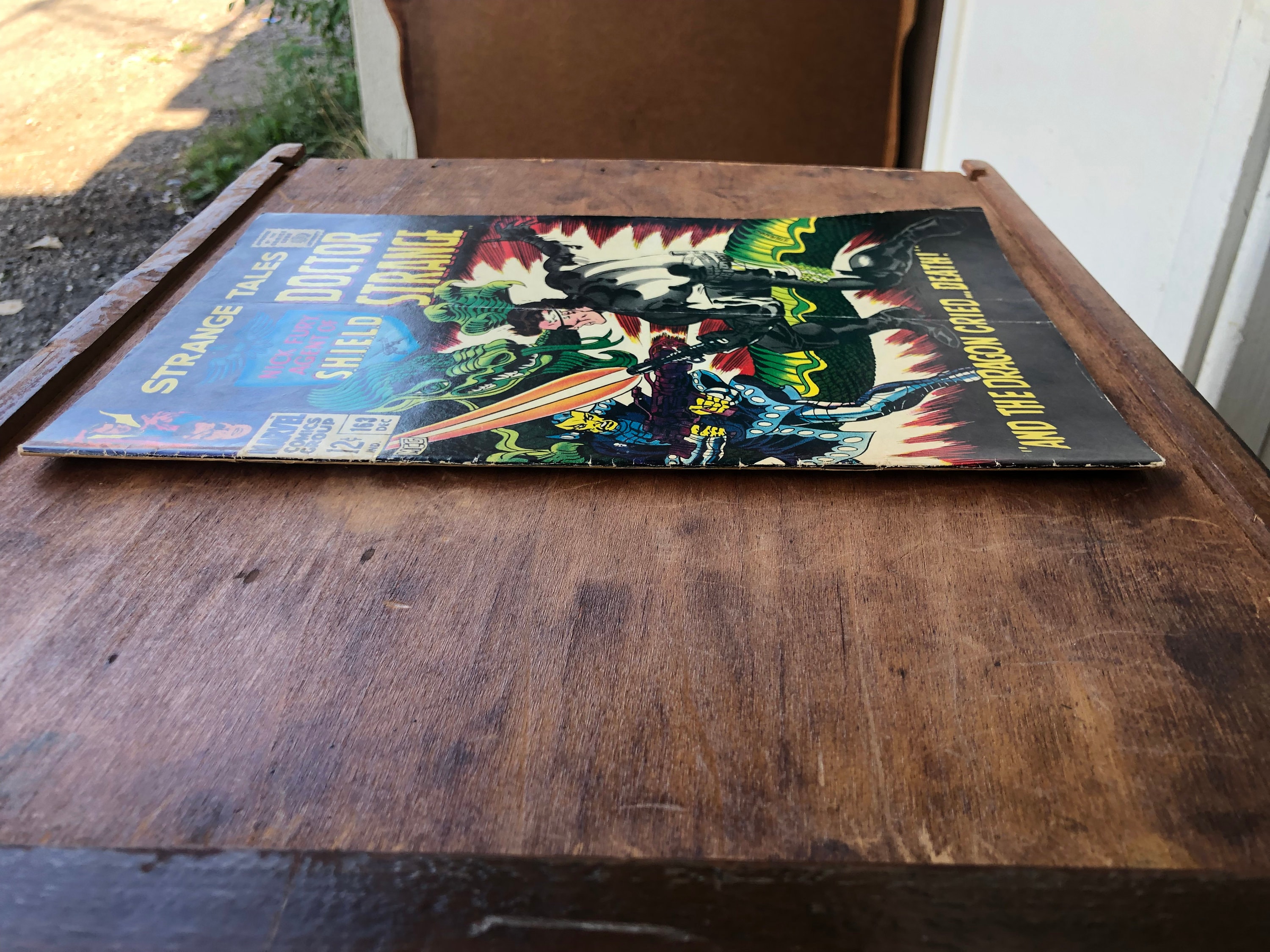 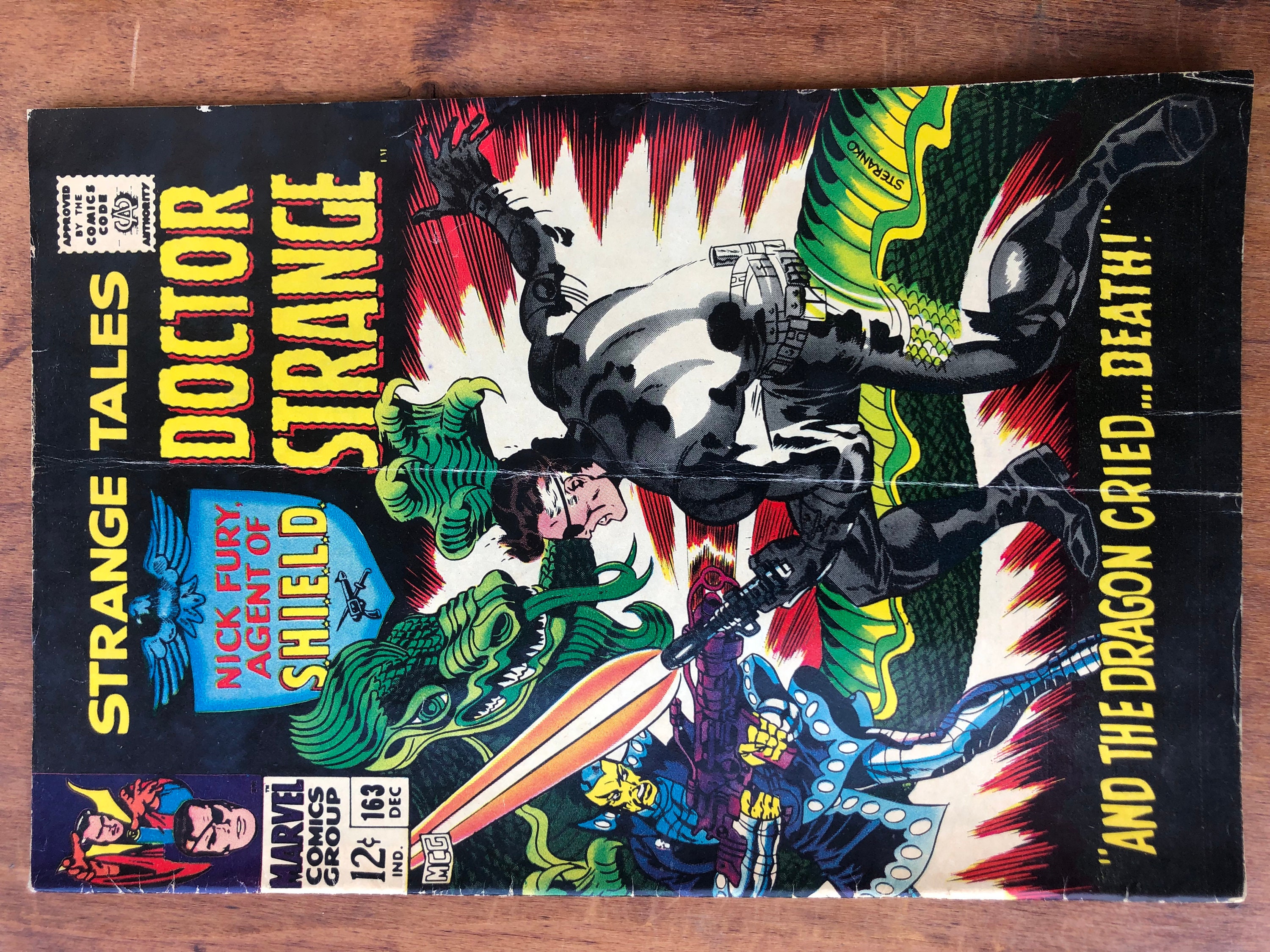 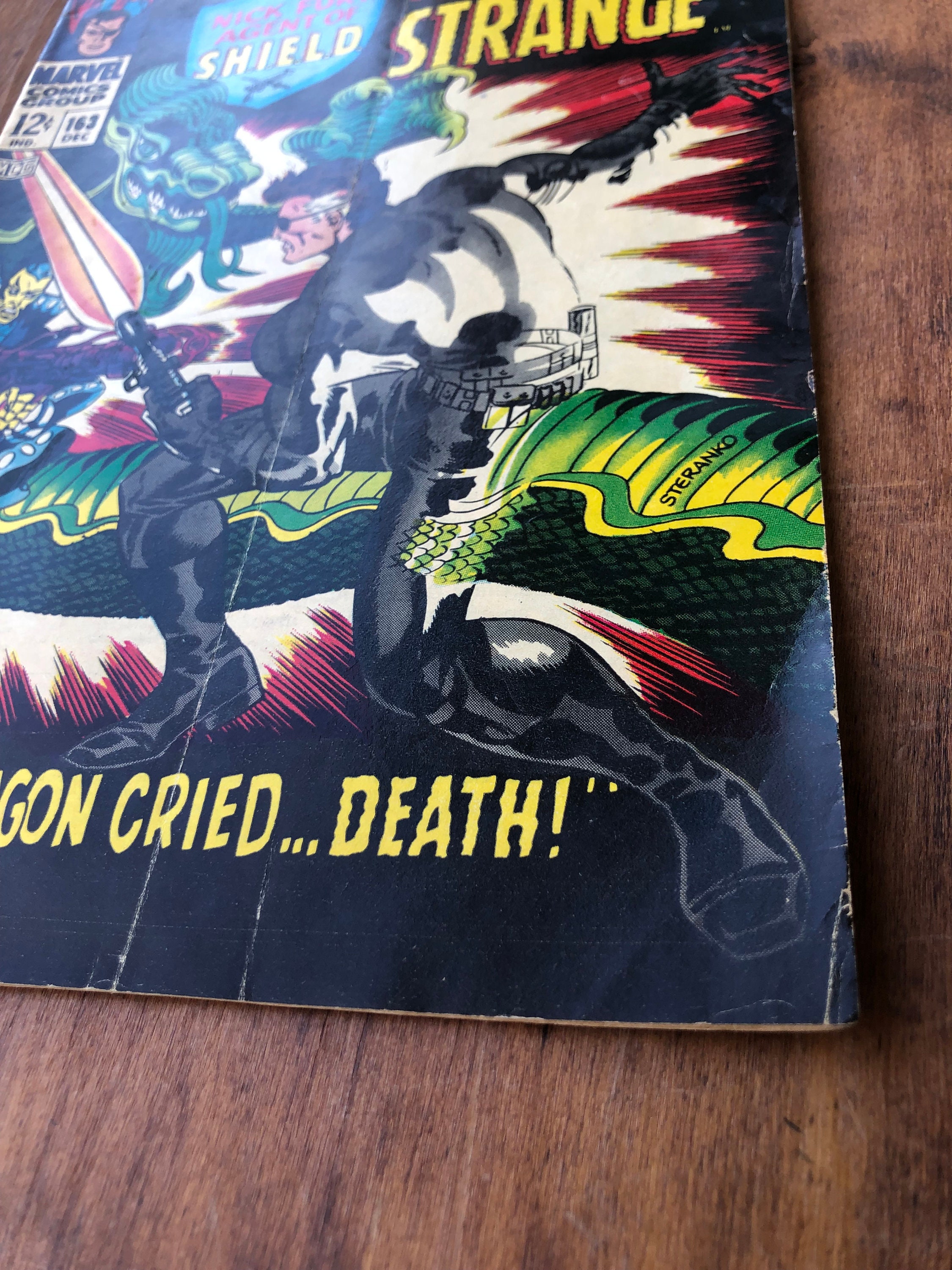 Here is a copy of Strange Tales #163- December 1967
It is in used condition.
See pics for condition.

1) And The Dragon Cried...DEATH! 2) Three Faces Of Doom!
1) 1st appearance "Clay Quartermain" (Agent Quartermain)
As Fury escapes the monster octopus, The Yellow Claw uses a "Psionic-Revelation Eavesdropper" to spy on A.I.M. Suwan, torn by her conscience, realizes she must contact Jimmy Woo. Woo contacts Fury to pass on the info that the Claw plans to steal something called "The Ultimate Annihilator" from A.I.M. Val recommends Fury take one of her fellow Spy School graduates, and introduces him to Clay Quartermain, a smiling eager-beaver almost too sure of himself. Fury & Quartermain take on a squad of A.I.M. agents on the waterfront, and retrieve an ornate dragon statue. Tests reveal nothing, and then the Claw materializes to steal it! But it was only a duplicate-- and by accident, they learn the real Dragon speaks the names of 4 scientists when struck. Fury arrives too late to save the first 3, but impersonates the 4th, getting the drop on The Claw. But under hypnotic power, Fury collapses, and the Claw uses the Ultimate Annihilator on him.

2) The Living Tribunal, learning the excess evil mystical energy has been absorbed into the staff of Nebulos, the Tribunal seeks to destroy, however needing the staff for it's own purposes Nebulos refuses to give it up. As the two beings battle it out, Dr. Strange tries to stop them from destorying each other fearing that Nebulos' destruction would lead to never knowing where Nebulos sent Victoria Bentley.

Temporarily taken out of battle the Tribunal, Dr. Strange fights off the pain causing creature the Tribunal created to keep Strange at bay. Strange then grabs the staff from Nebulos just as the Tribunal had successfully burried the creature in falling rock from a destroyed mountain. Strange hands over the staff to the Tribunal, who in thanks transports Strange to the location of Victoria Bentley.