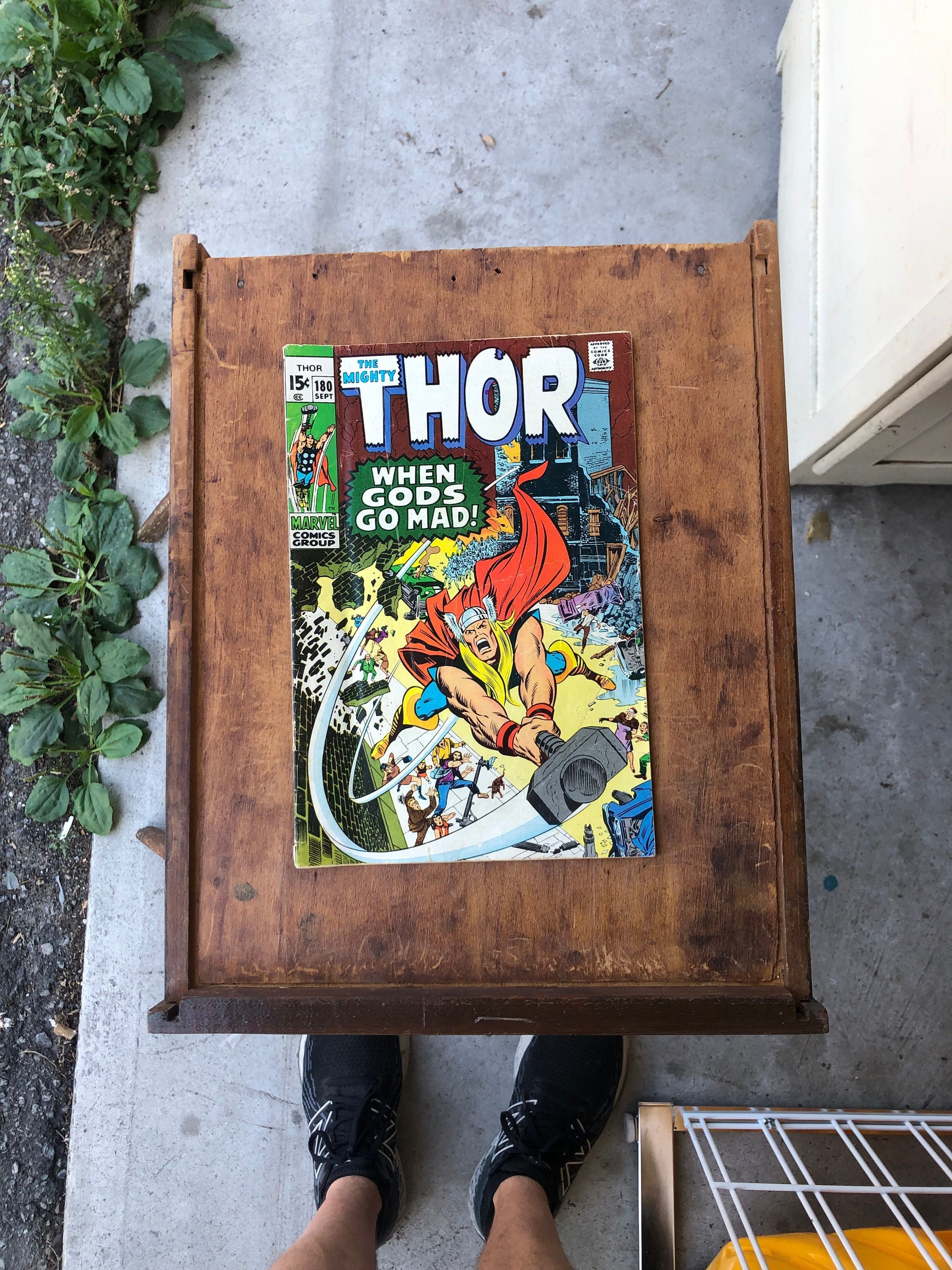 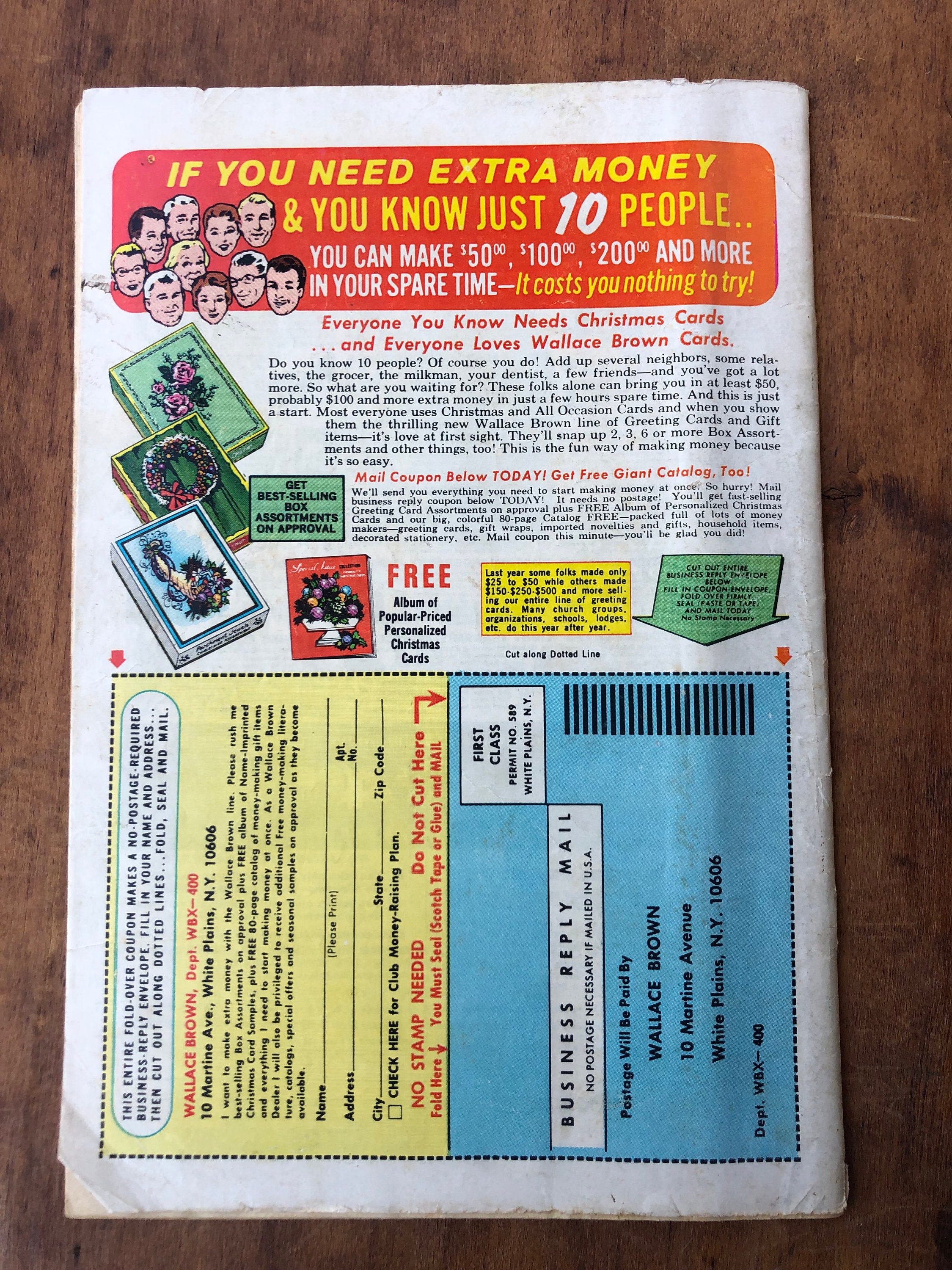 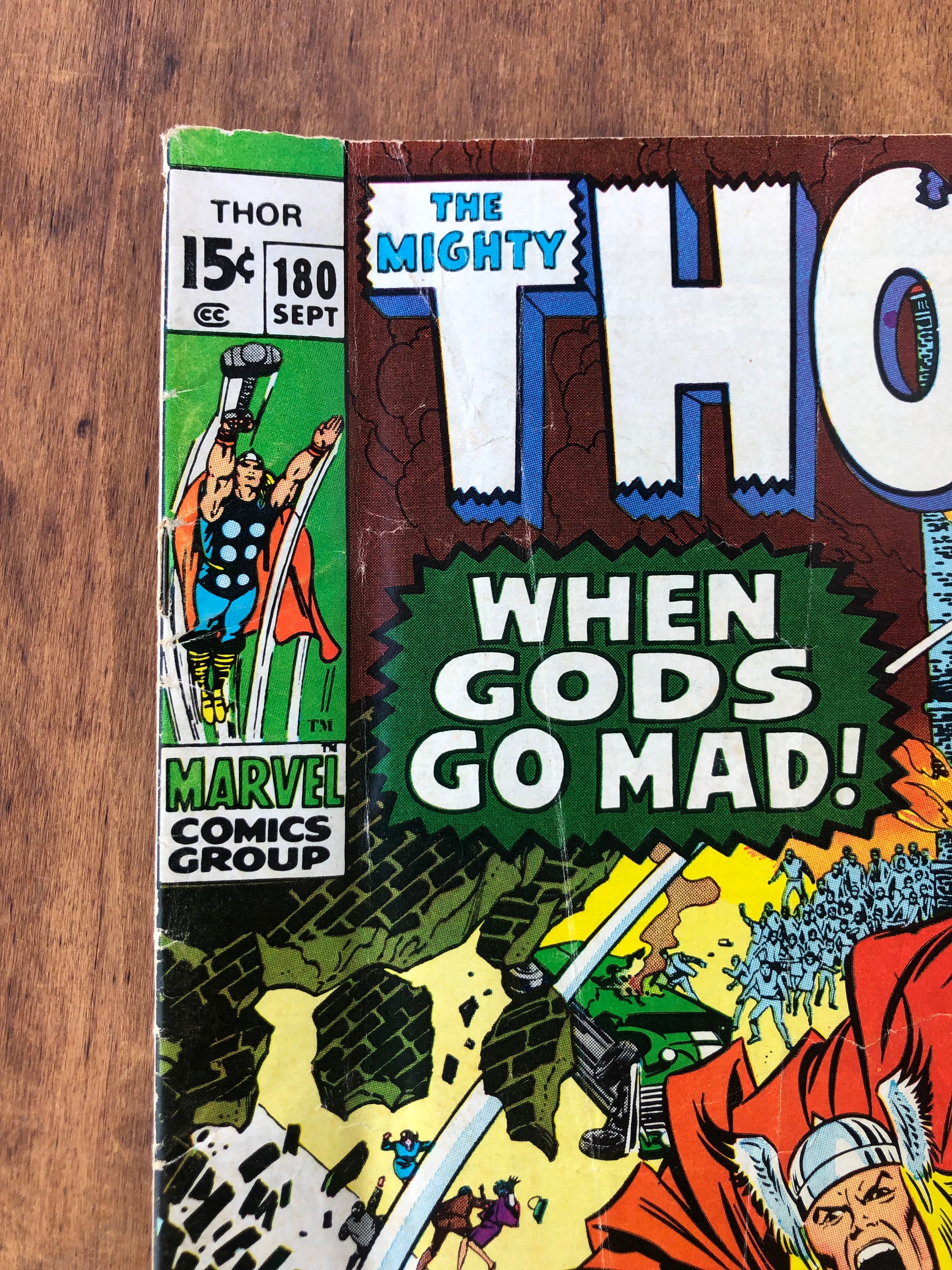 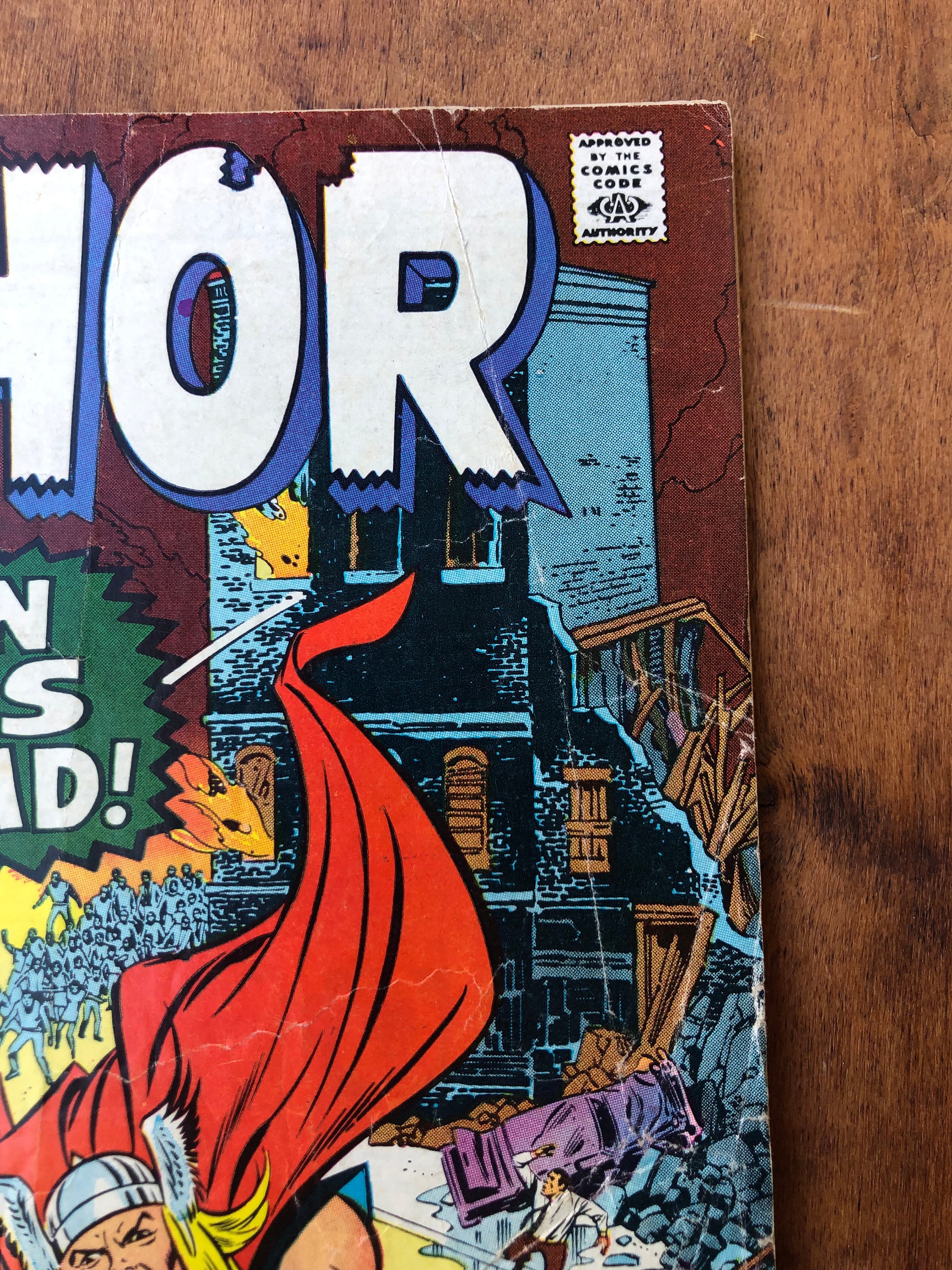 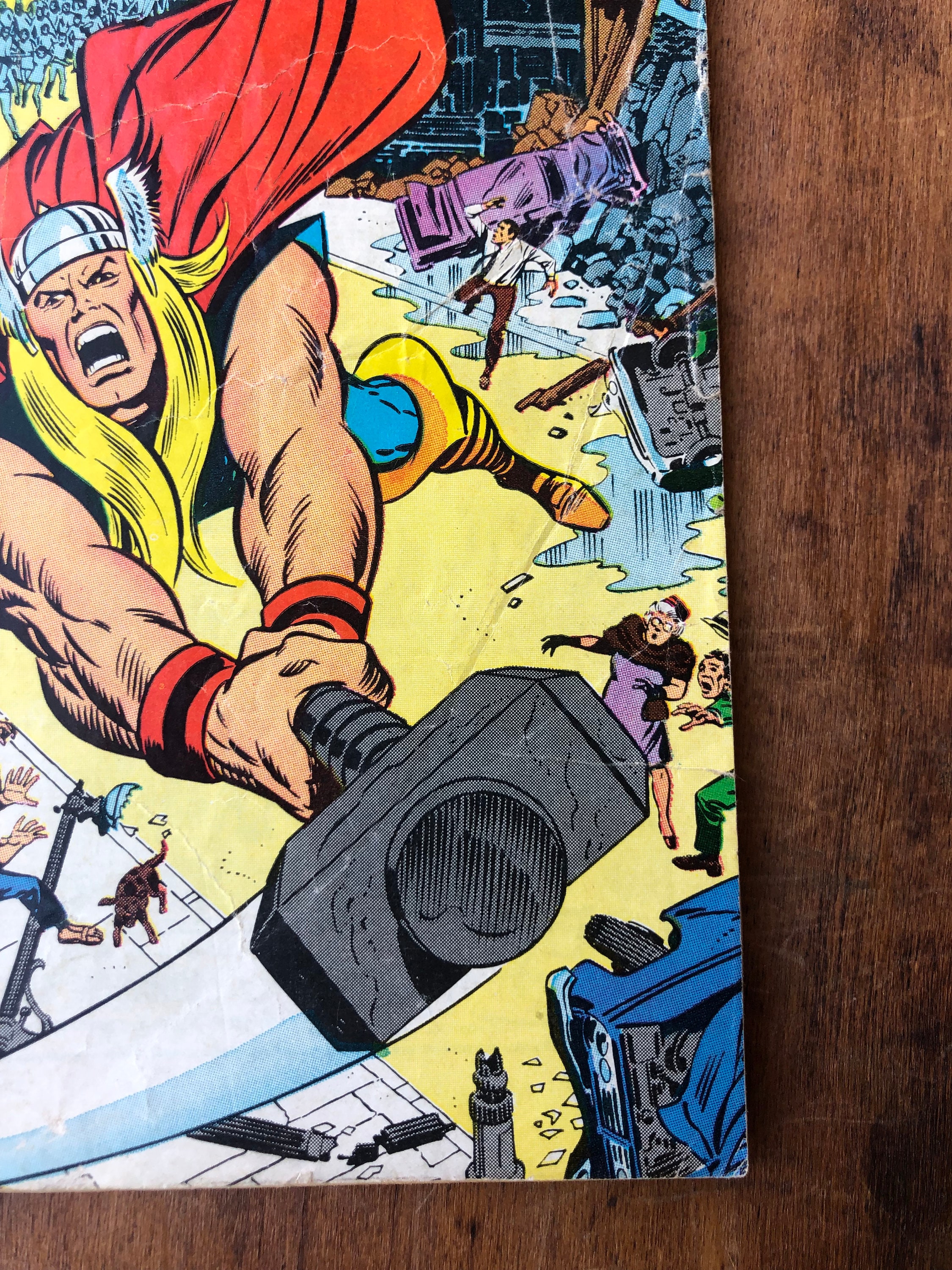 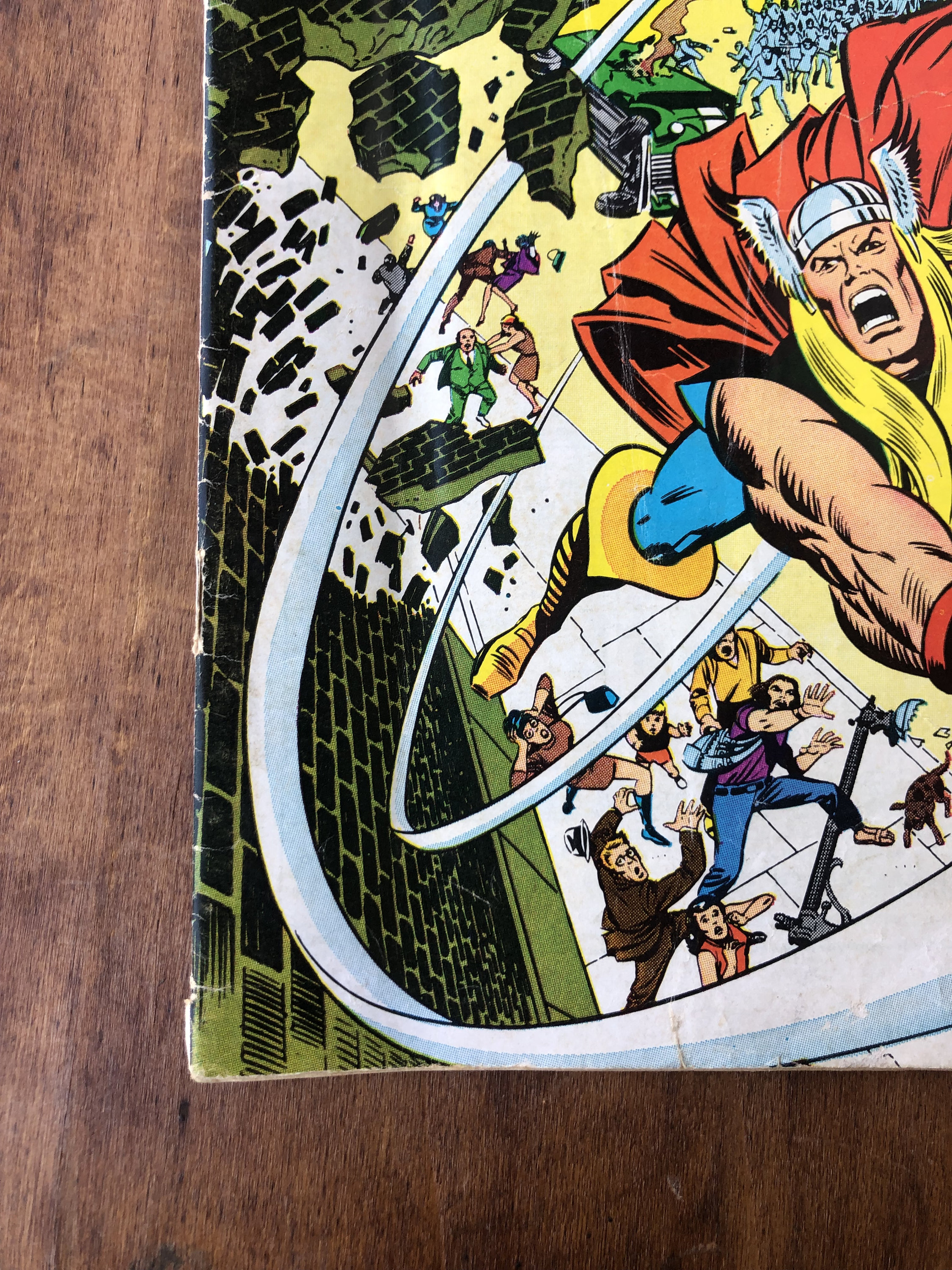 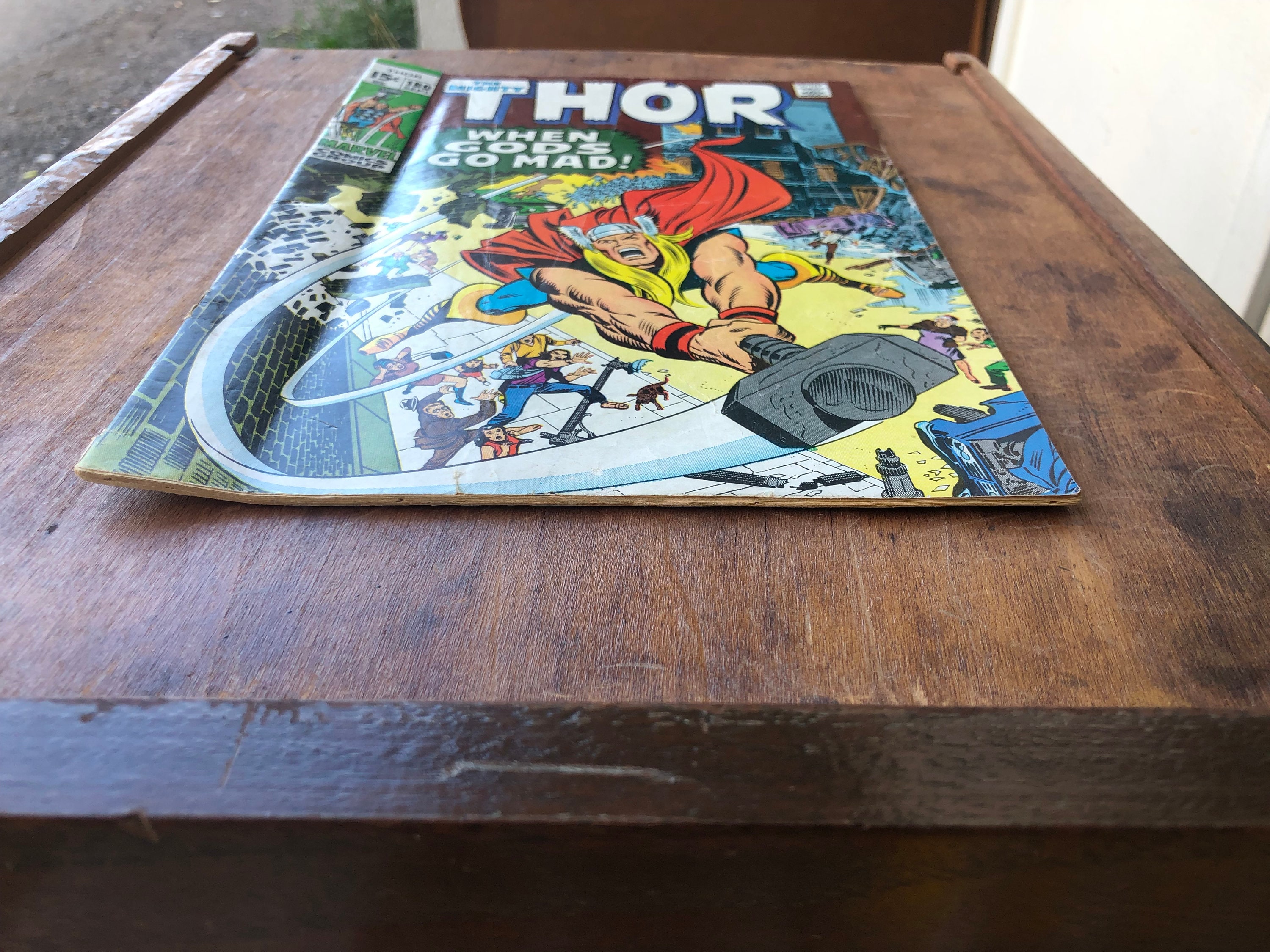 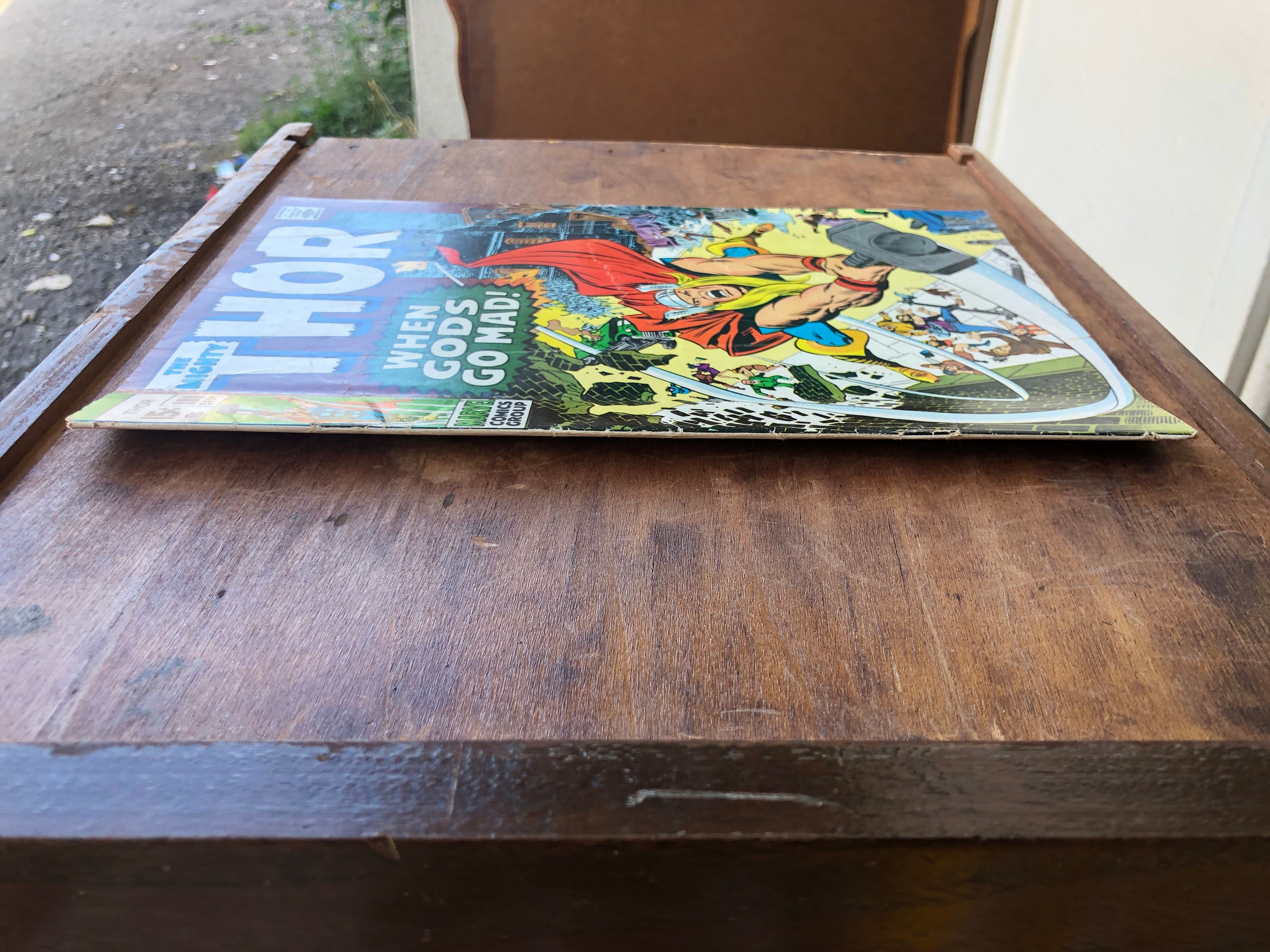 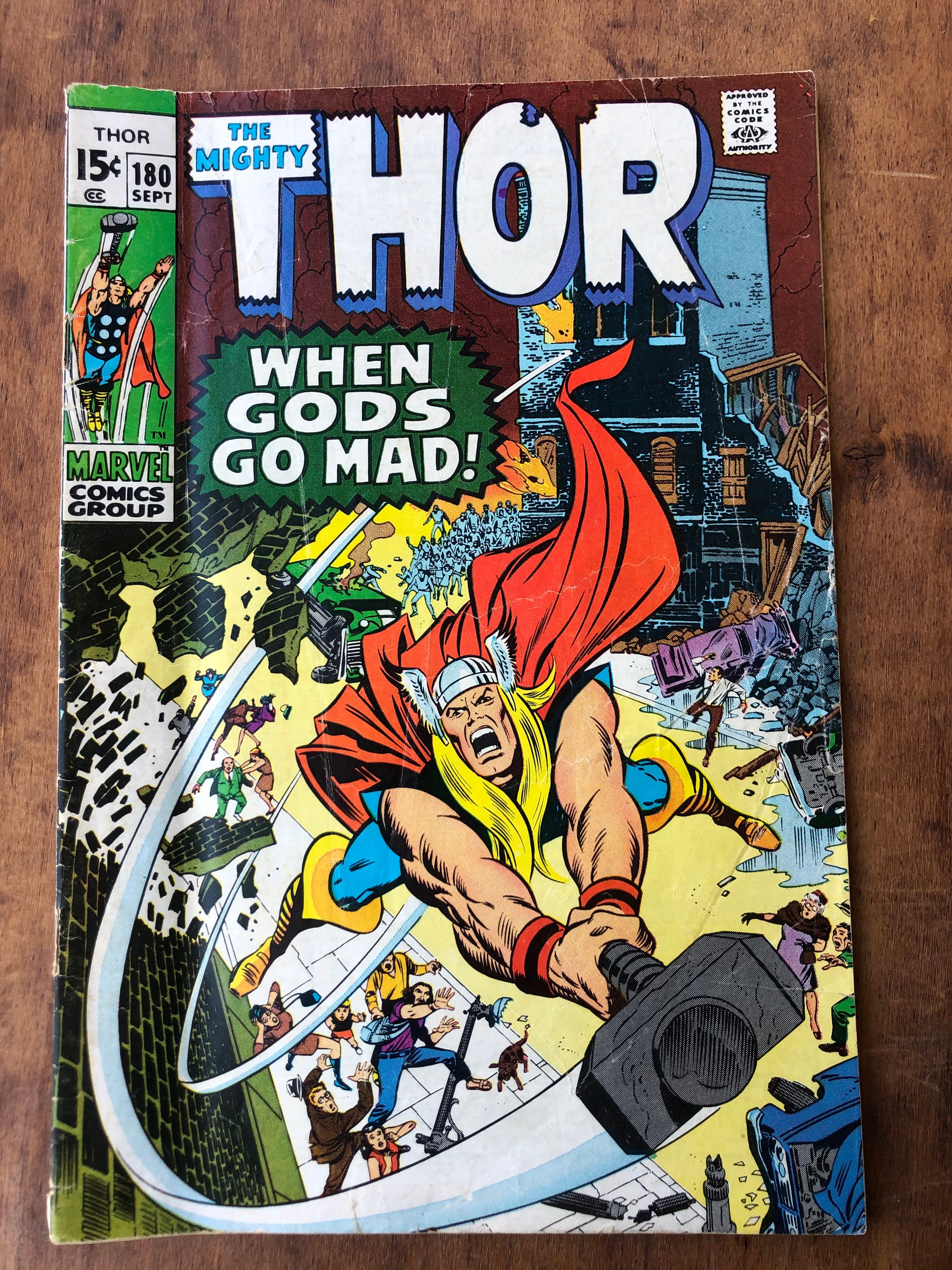 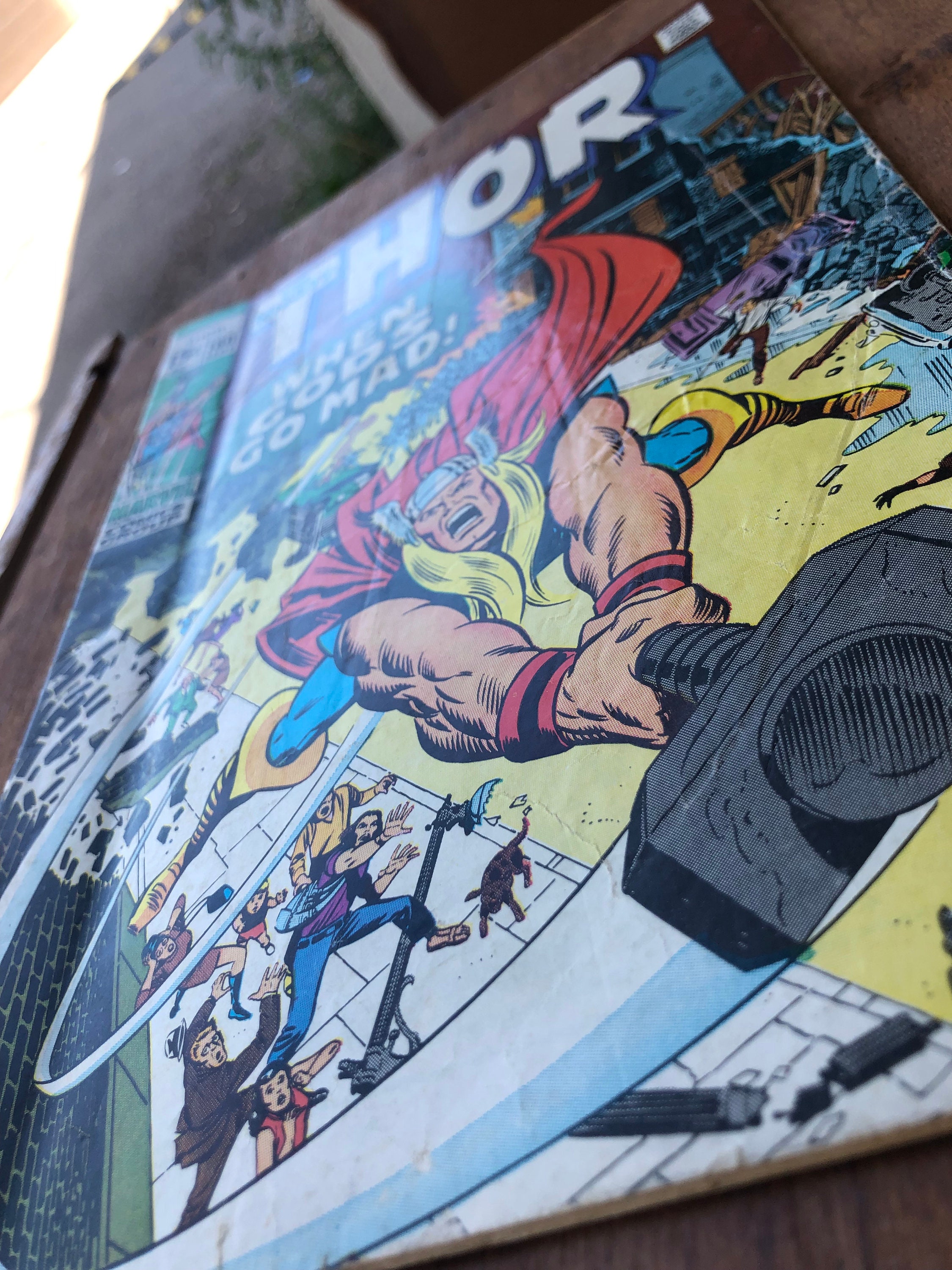 Here is a copy of The Mighty Thor #180-September 1970
It is in used, see pictures for condition.

When GODS GO MAD!
Loki has switched bodies with Thor and now seeks to ruin Thor's good name by terrorizing the people of Earth. He starts by causing havoc in New York City; however, his attempts are countered by Thor (in Loki's body), Balder, and Sif, who has come to find a way to change the body switch.

While in distant Asgard, hearing that Thor has found Loki, Odin becomes furious that the trickster has not been already brought before him and casts his eyes to Earth. Witnessing the battle and unaware of the body switch, Odin teleports Thor back to Asgard, thinking the Thunder God is Loki. When Thor tries to explain the situation to Odin, the All-Father refuses to listen and mystically places a clamp over his mouth before sentencing him to be banished to Hades.

While back on Earth, Loki uses Thor's man powers to cause a storm and continue terrorizing the Earth. Balder and Sif, however, attempt to stop Loki but find him too powerful. When Loki grabs hold of Sif, she manages to escape by teleporting back to Asgard, leaving Balder to fight Loki alone, and he is swiftly defeated.

While in Asgard, Sif rushes to get an audience with Odin to tell him of the grave mistake that has been made. However, the Grand Vizier tells Sif that Odin is currently preoccupied and that "Loki" has been banished to Hades. The Vizir takes Sif to the Cosmi-Screen, where she is horrified to find that the "Hades" that her love has been sent is none other than Mephisto's realm.

Thinking Thor is Loki, Mephisto welcomes the "trickster god" with open hands. However, when Mephisto touches "Loki's" shoulder, he feels pain caused by Thor's inherent goodness. Looking deep into the person's soul before him, Mephisto learns the truth and attacks Thor. Unleashing many mystical dangers, Mephisto is denied a victory due to Thor's basic understanding of Loki's magical powers.

While back in Asgard, the Warriors Three are fighting off a group of Trolls. Once they have defeated them (thanks to Volstagg rolling down a staircase and knocking them all out), they are met by Sif, who asks them to help Thor, a request they gladly help with. Showing the Warriors Three that Thor and Loki have changed bodies, they agree to travel with her to Hades to save Thor from the clutches of Mephisto.

Arriving in Mephisto's realm, the heroes are greeted by the hell-lord, who shows them that they have arrived too late and brings them to Thor's body, frozen in a chunk of ice.