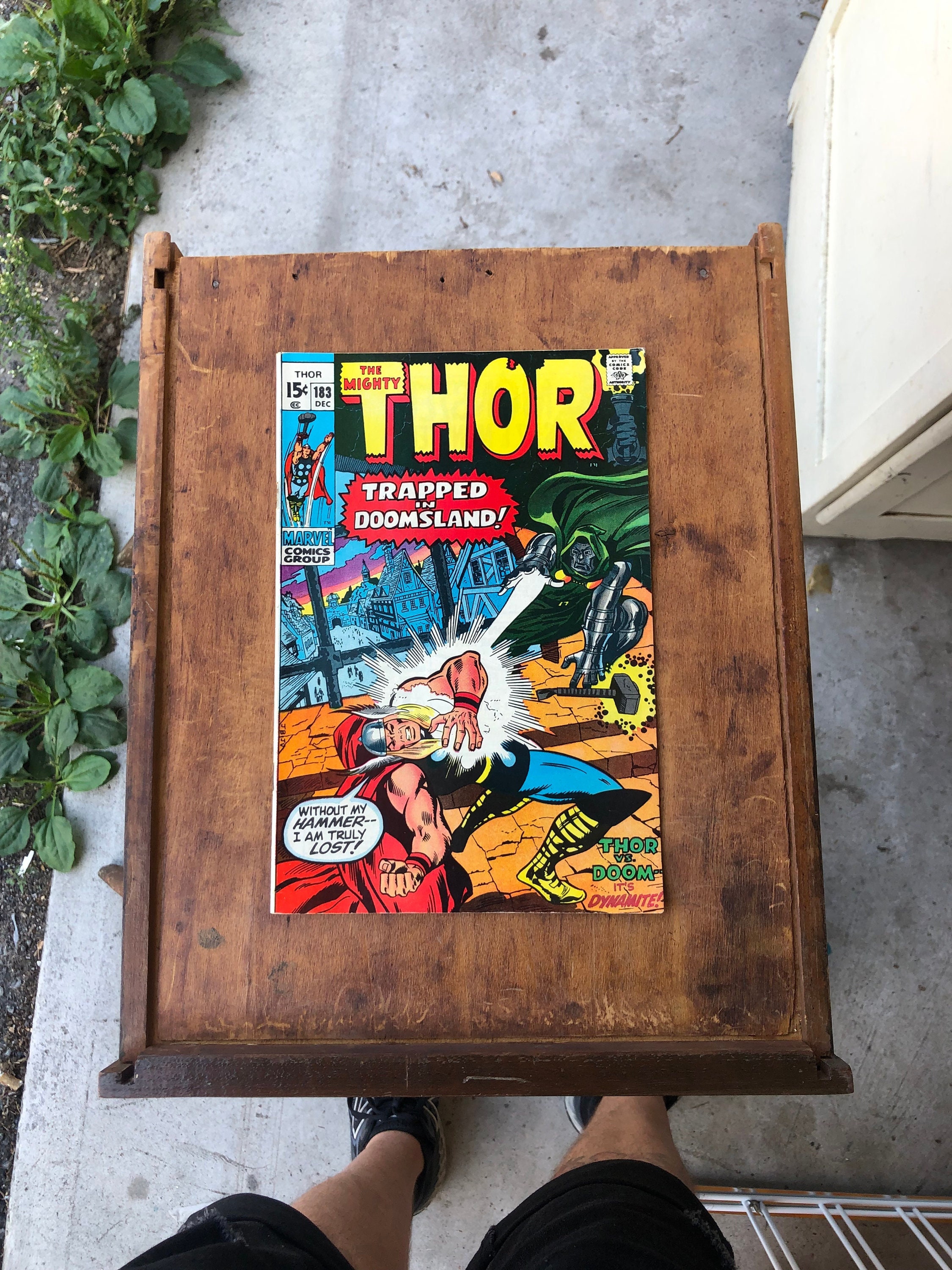 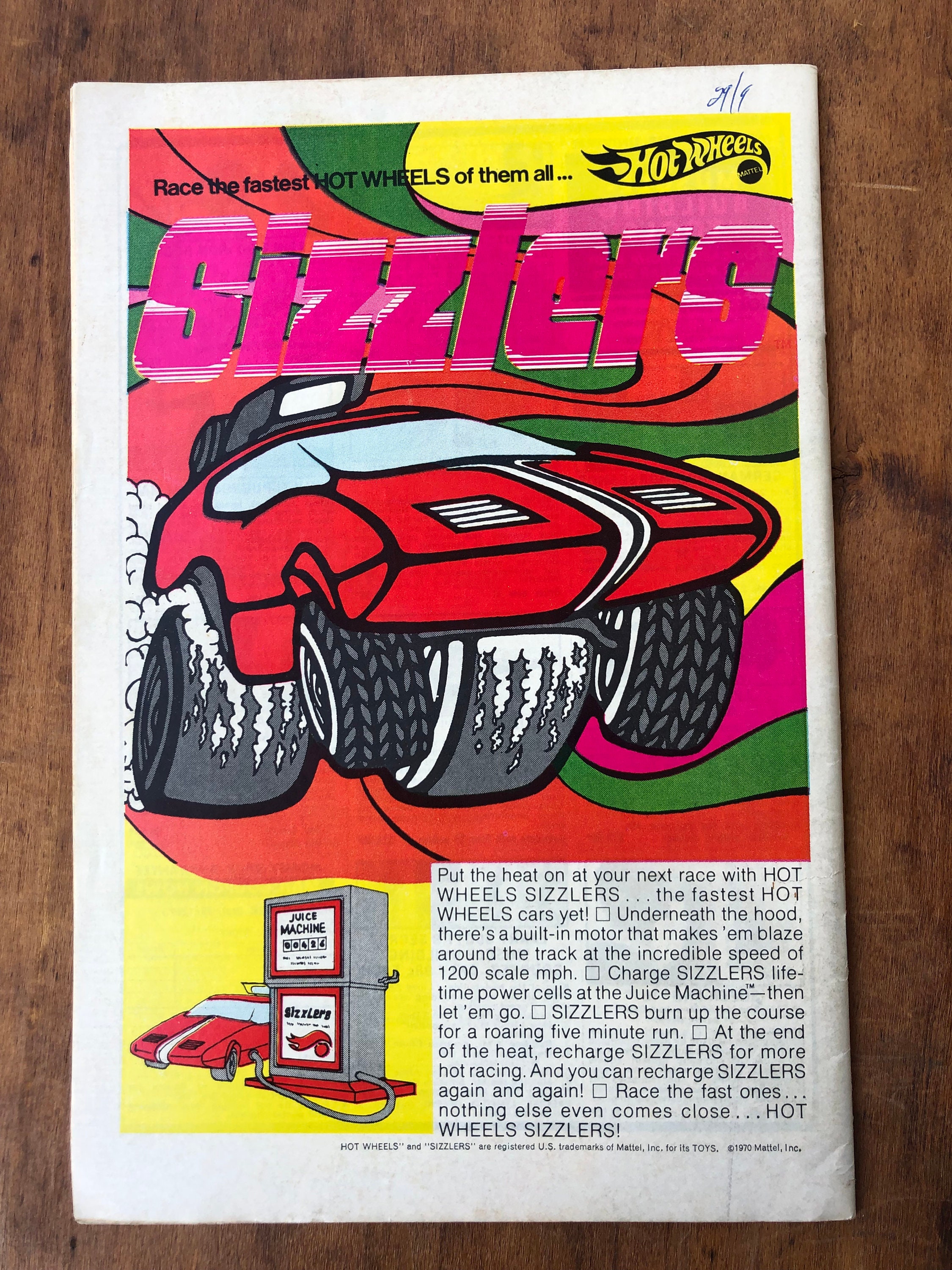 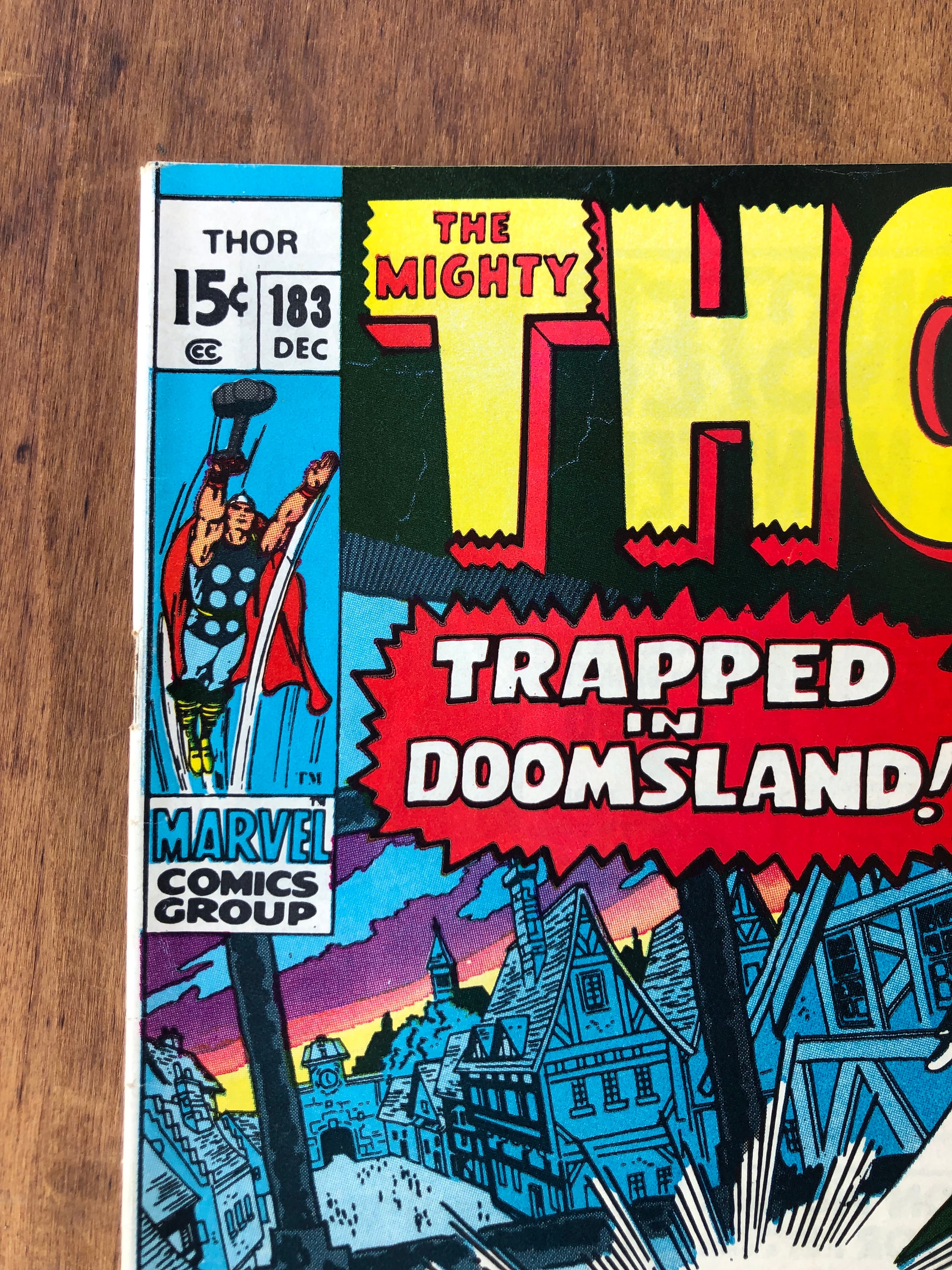 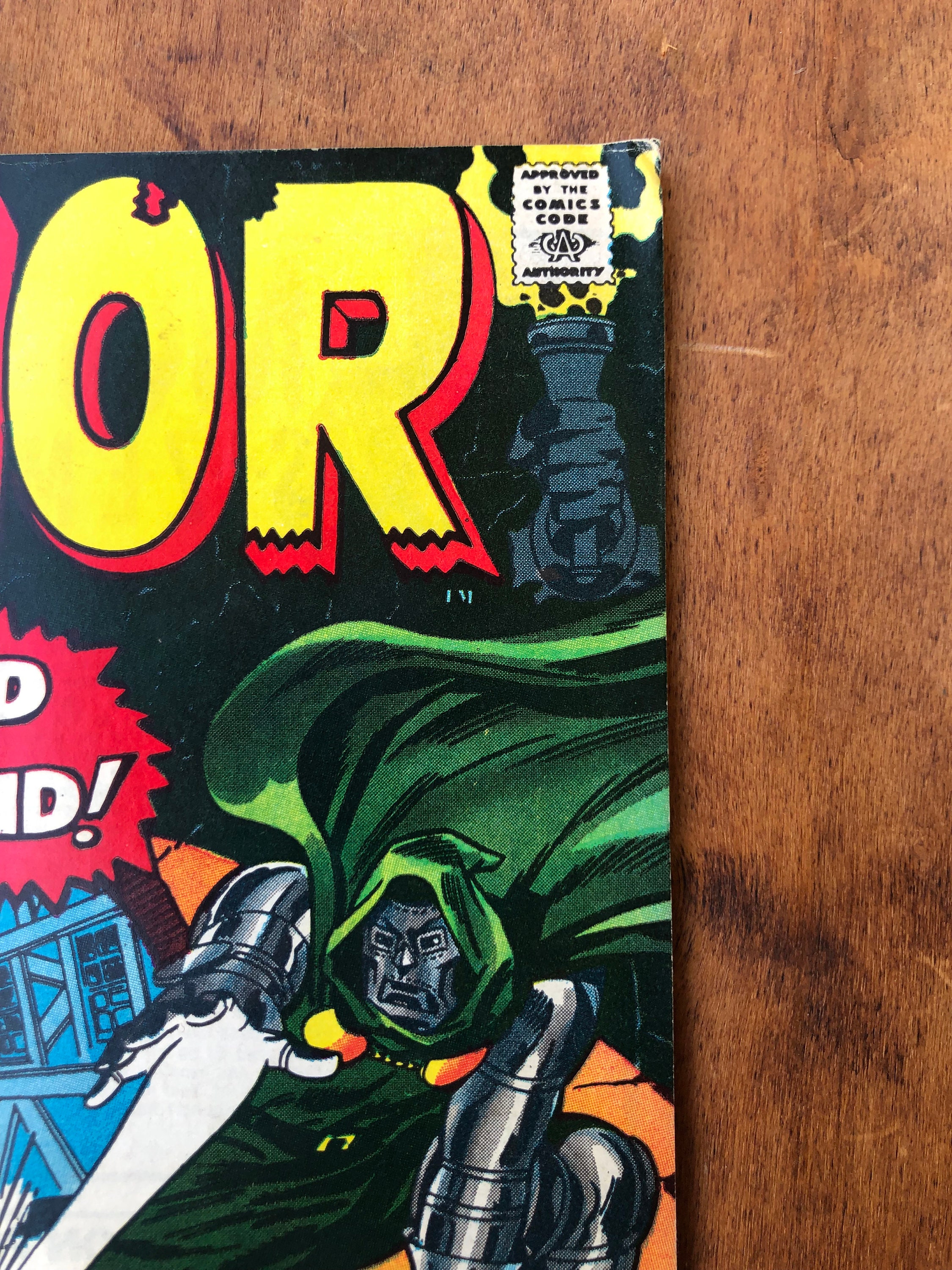 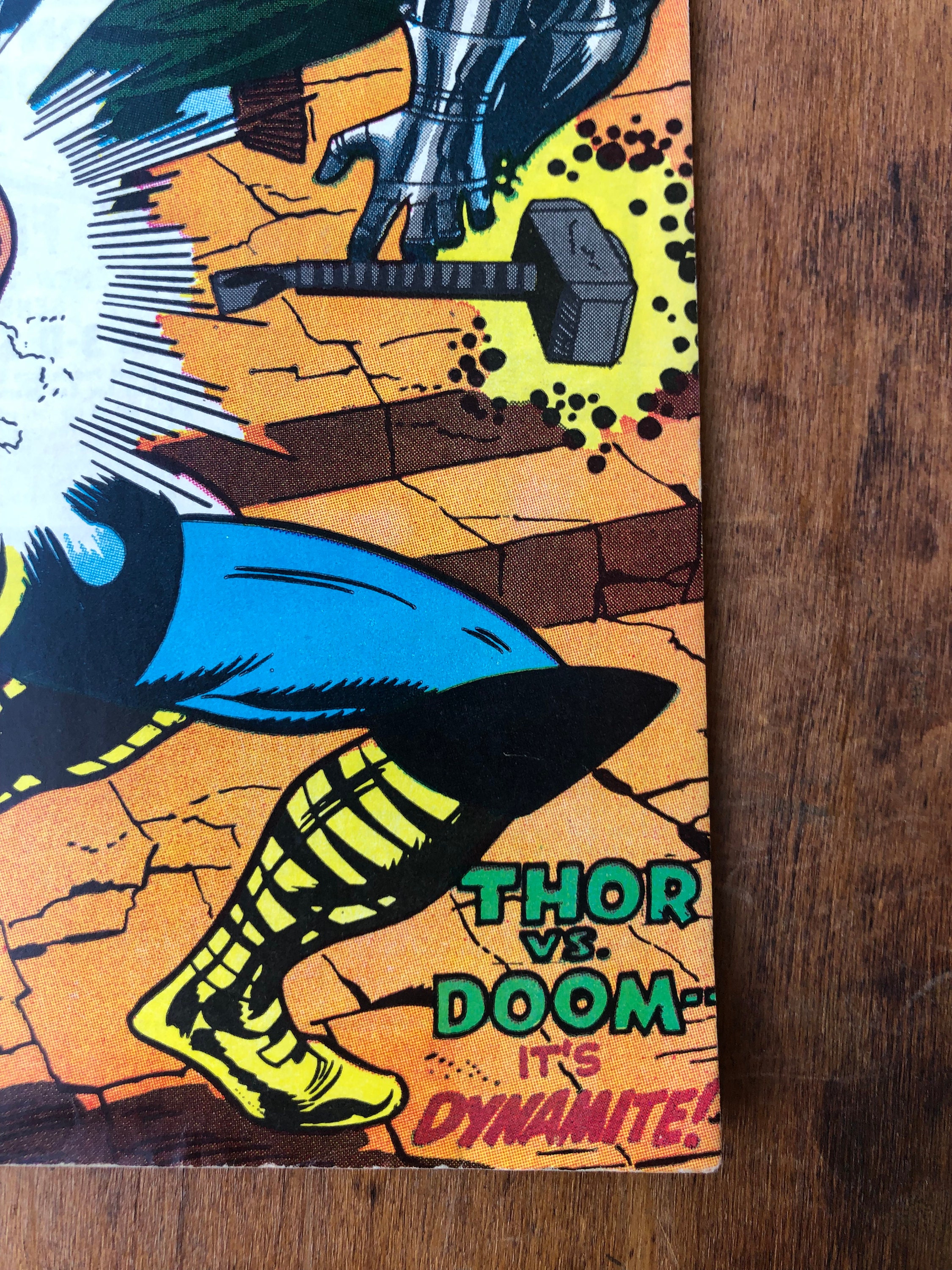 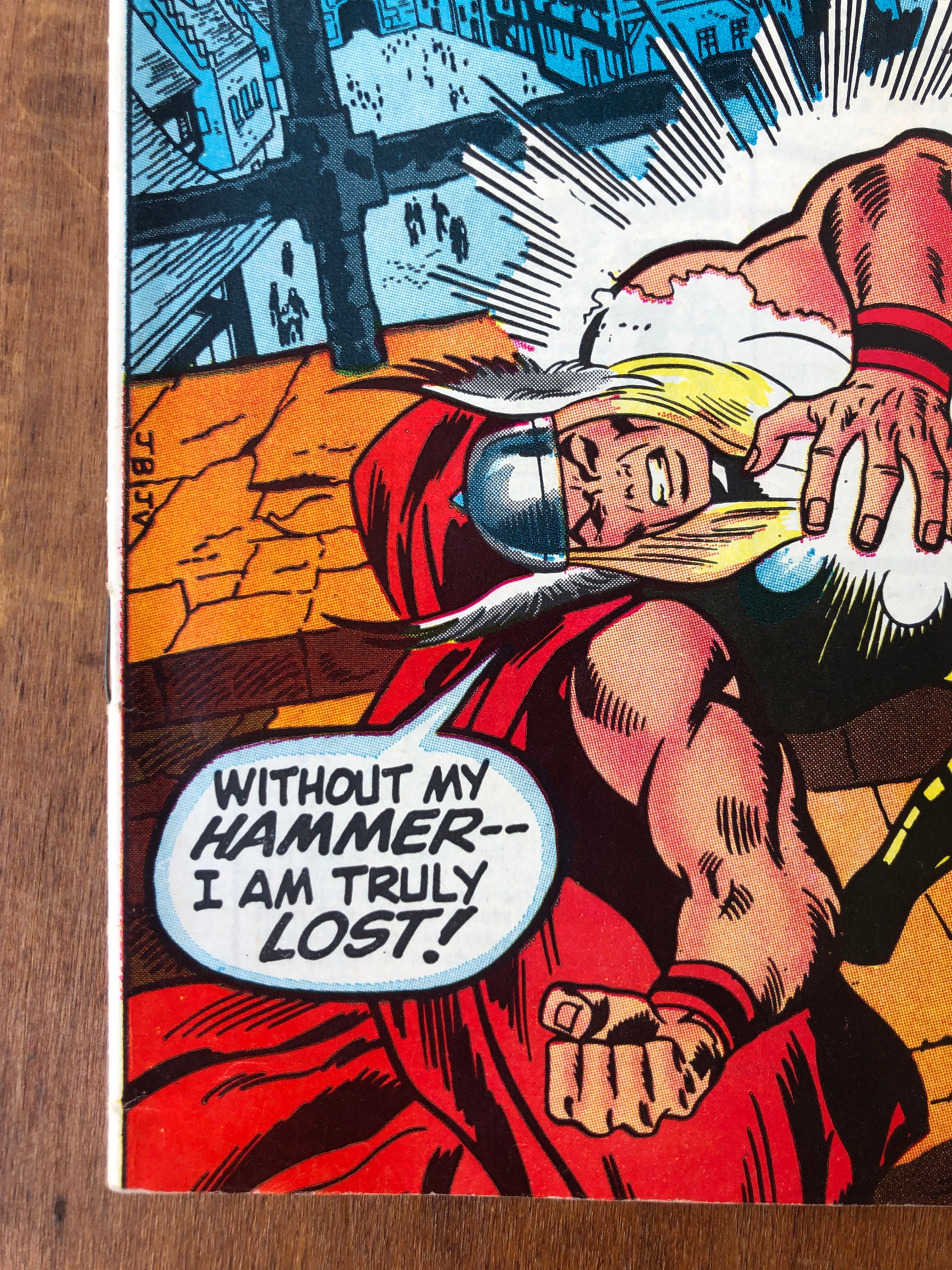 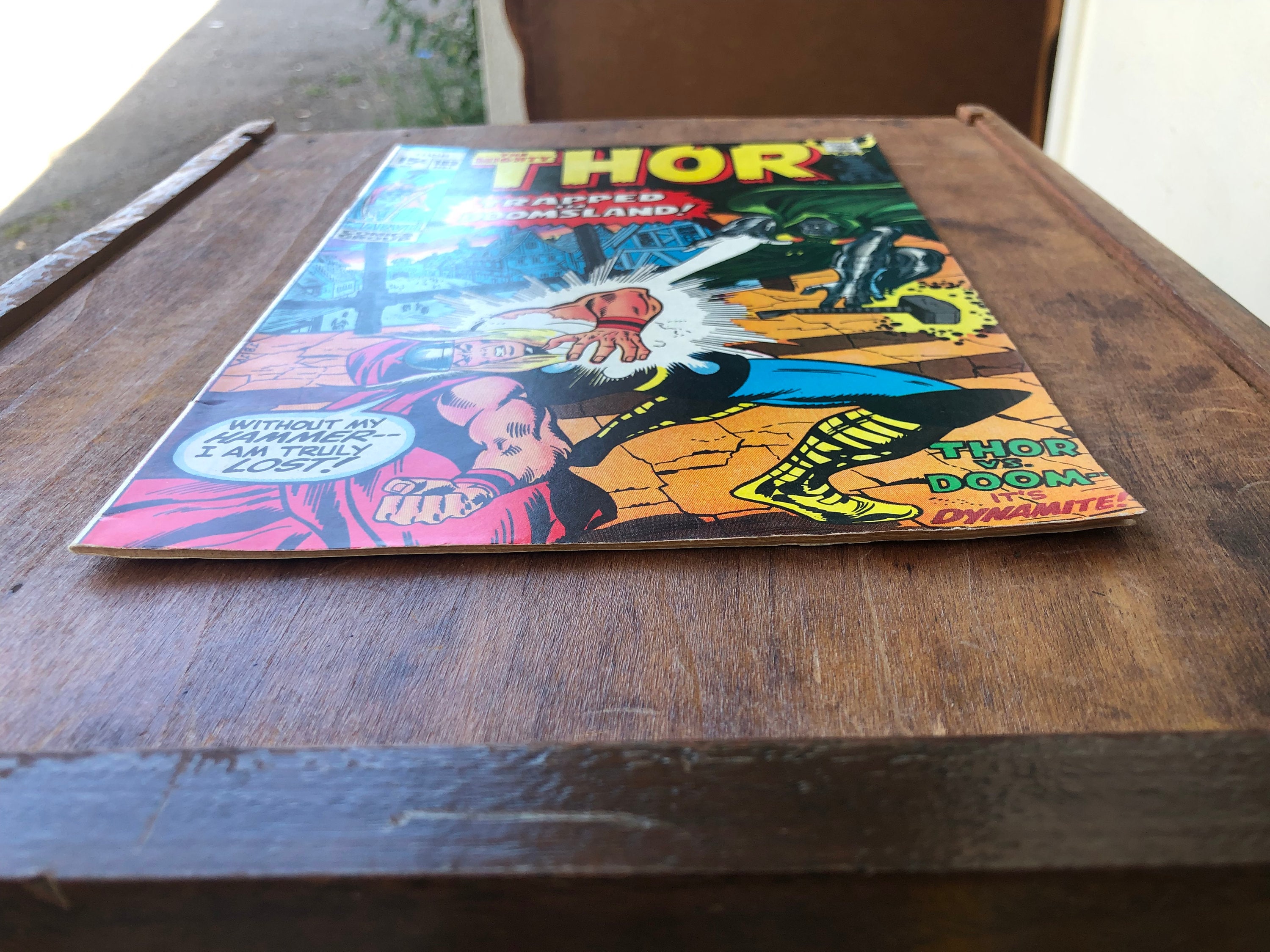 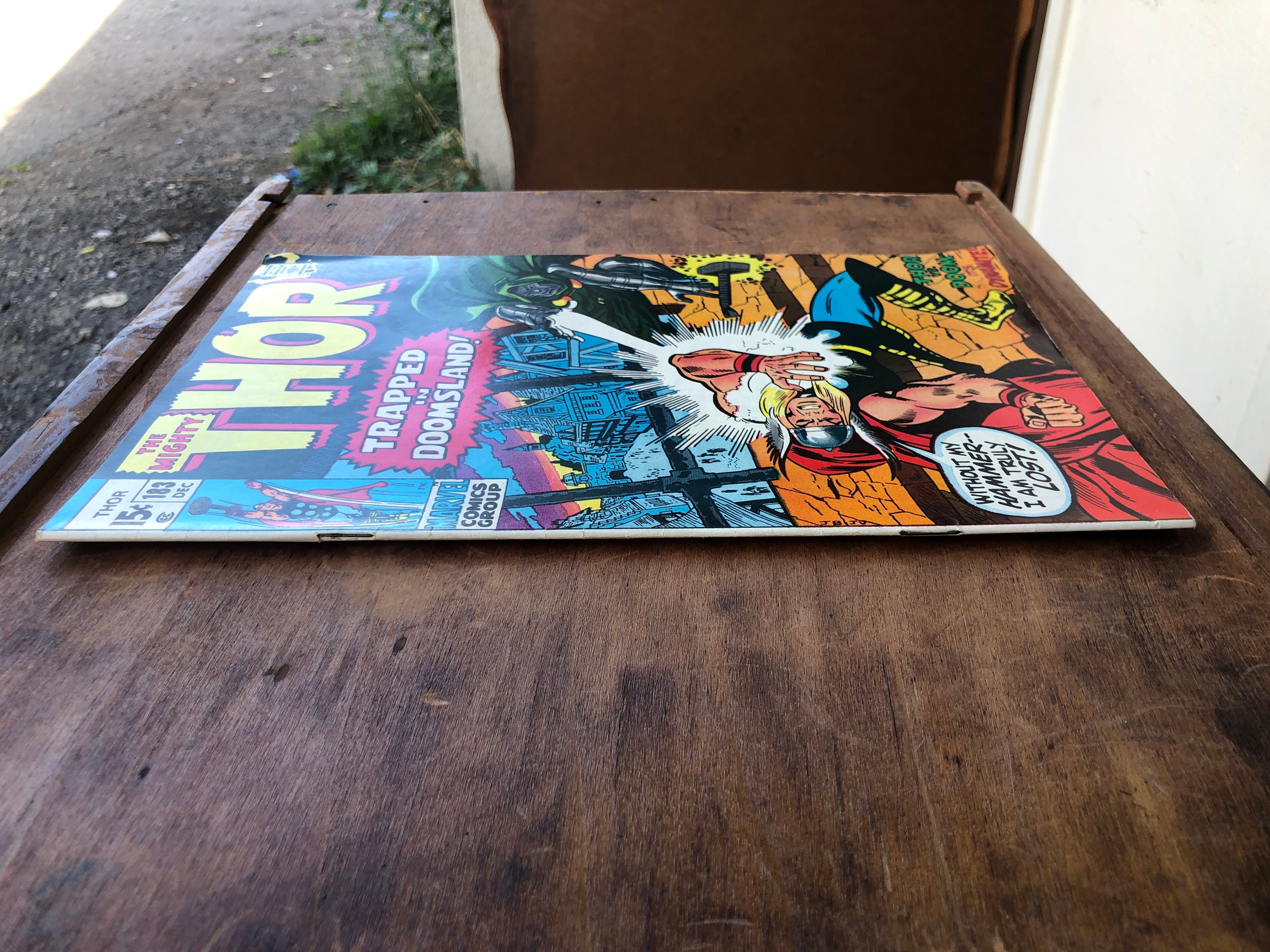 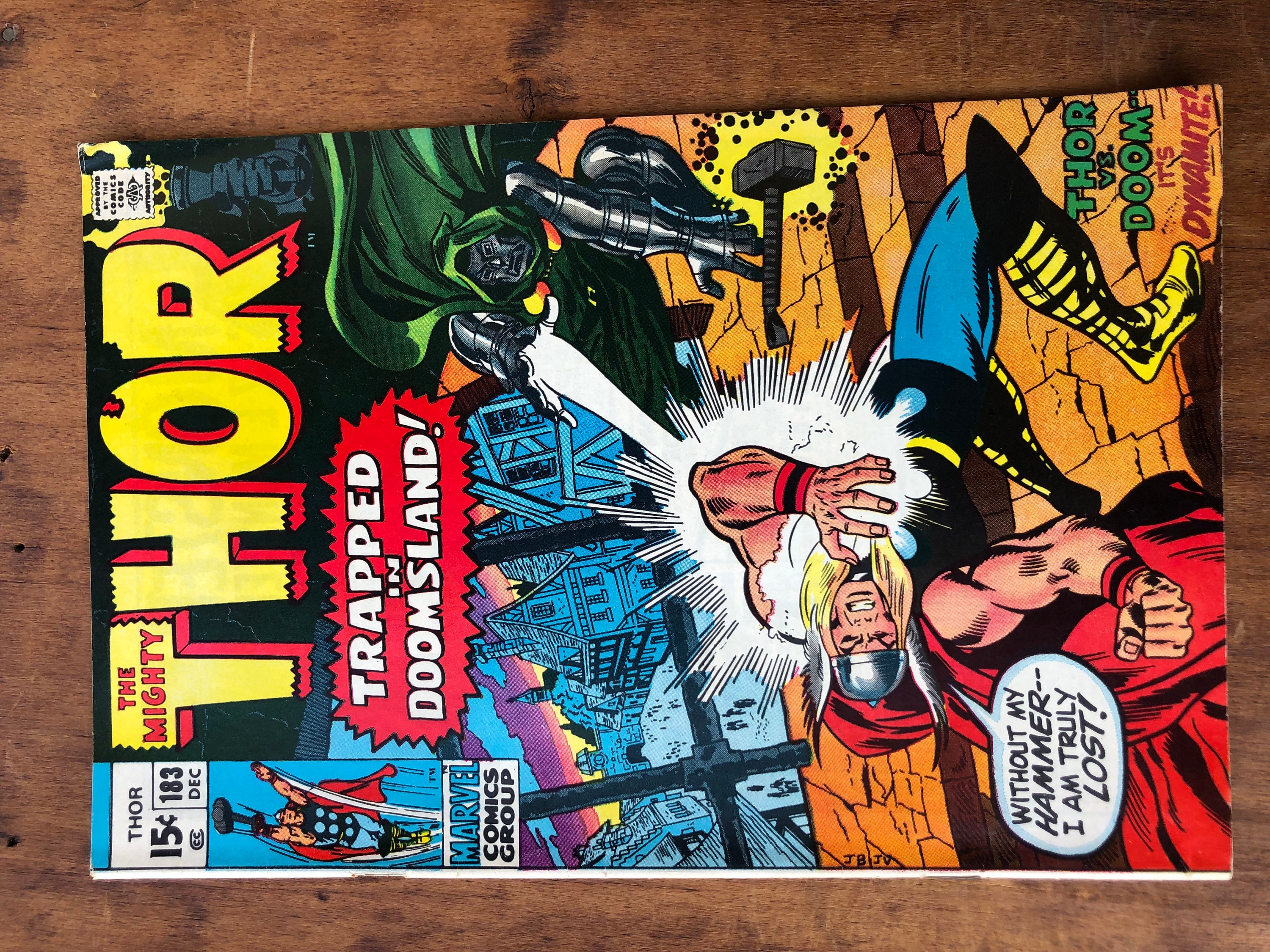 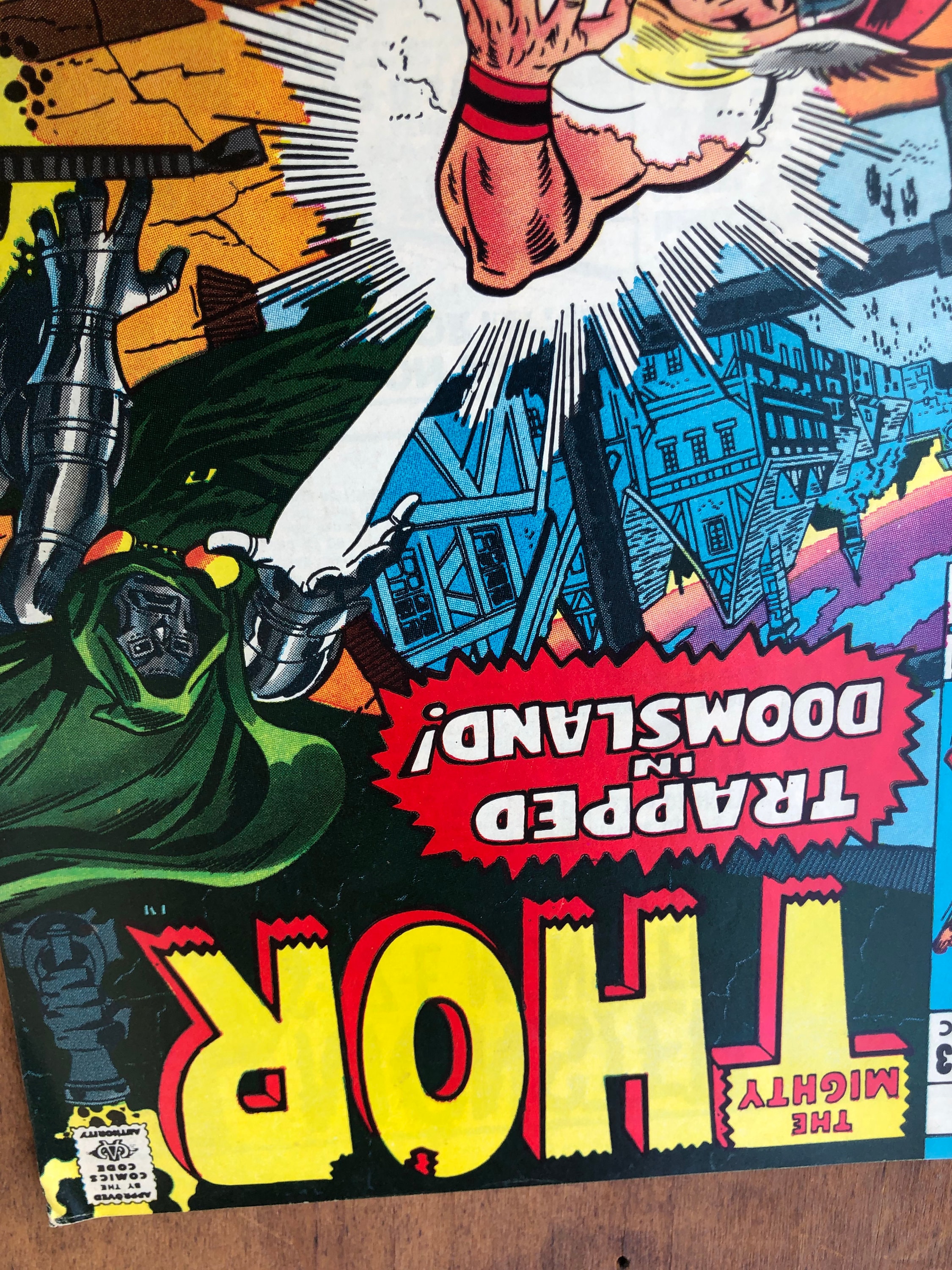 
Trapped In DOOMSLAND!
Thor is in Latveria with a missile on his tail that threatens to destroy not only him but a village full of innocent people below him. However, Thor comes up with a solution: Using his hammer to create a vortex, Thor throws it high into the sky, causing it to suck the missile out of harm's way. However, Thor slams to the ground without his hammer and watches as the missile explodes harmlessly.

When his hammer doesn't come back, Thor must find it, but the 60-second limit he can spend away from his hammer elapses, and he changes back into Donald Blake. Meanwhile, Dr. Doom has tracked the location of Thor's hammer, but when he cannot lift or destroy it, he instead encases it in a force field and puts guards on the watch to destroy anyone who might come for it. Turning his attention to the missing Donald Blake (not having made a connection between Blake and Thor), he unleashes a silent stalker robot to hunt him down.

While in far off Asgard, Odin, Sif, and Balder watch Thor's progress. However, Odin is confident that his son will overcome this challenge and defeat Dr. Doom. However, Sif cannot help but be upset and fear for the worst.

Back in Latveria, Donald Blake has found the lab of Professor Lafarge, hoping that the professor can help him find his hammer. However, he finds that Lafarge is paranoid and thinks Blake is only a test by Doom to check on his prisoners' loyalty. Finding the hopeless situation, Blake leaves and decides to look for his hammer on his own. Blake does indeed find it and the force field around it. He then begins digging a hole but abandons it when he hears footsteps and finds a hiding spot.

When Doom's soldiers find Blake's jacket in the hole, they assume that he is in there, fire their ray blasters into the hole, and depart when they are satisfied that Blake is dead. Blake comes out of his hiding spot and finds that the guards had achieved what he had hoped: namely, blasting deep enough into the ground for Blake to dig under where his hammer is trapped and free it. Regaining his hammer, he is transformed back into Thor and is praised by Odin for proving worthy during this trying challenge.

Thor then charges to Doom's castle, where he fights the Latverian monarch one-on-one. Thor almost loses the fight when Doom manages to knock away his hammer, and the 60-second limit almost passes. However, Thor manages to regain his hammer at the last minute and fight off Doom. With Doom staggered, Thor flies off to the site of all of Doom's specially built missiles and destroys them. With the threat of Doom over, for now, Odin calls Thor to come back to Asgard to travel to the World Beyond.

However, before he goes, Thor returns to Professor Lafarge's lab to tie up loose ends. Instead of rescuing Lafarge for his daughter Cossette, he finds that Lafarge wasn't forced to create the weapons -- that he did so willingly for money. The crazed professor then turns a gun on Thor. Thor uses his hammer to block the bullets. However, one of the shots ricochets back and hits the professor, whose dying words curse his daughter for sending Thor. Thor then leaves Latveria, with Doom calling him a coward.

Thor returns to New York, telling Cossette that his father has died. Instead of tarnishing the girls' memories of her father, he misleads her into thinking that he died fighting the tyranny of Dr. Doom without lying: